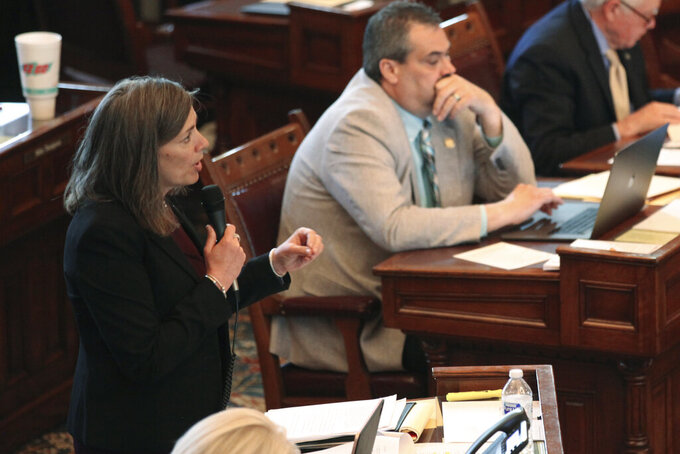 Kansas state Sen. Kellie Warren, R-Leawood, speaks during a Senate debate on legislation dealing with COVID-19, Tuesday, May 4, 2021, at the Statehouse in Topeka, Kan. Warren is the chair of the Senate Judiciary Committee and is pushing a proposal to set aside up to $2 billion in federal COVID-19 relief funds to compensate businesses hurt by the pandemic. (AP Photo/John Hanna)

TOPEKA, Kan. (AP) — Republican lawmakers advanced a plan Tuesday to provide hundreds of millions of dollars to Kansas businesses hurt by coronavirus pandemic restrictions, and they're poised to give GOP leaders the final say over how the federal COVID-19 relief funds are spent.

The Republican-controlled state Senate approved, 26-13, a bill that would dedicate nearly $350 million in coronavirus relief funds for the state and another $350 million for cities and counties to compensate small businesses that were forced to shut down last spring because of the pandemic or had their operations restricted after the economy reopened.

GOP legislators have been considering different figures for the total relief, and the Senate began its discussion at $2 billion — but reduced it after Vice President Rick Wilborn, a McPherson Republican, called that number “probably a little rich.”

Senators also passed, 33-6, another measure that would provide rebates of up to $7,500 from cities and counties to businesses for the property taxes they paid while they were shut down or their activities were limited. Those taxes are based on property values, not income, so they were owed whether or not a business was open.

The two business-relief bills go next to the Republican-controlled House. Lawmakers hope to wrap up the year's business by week's end.

“Businesses were blindsided and their liberties were taken away through no fault of their own,” said Senate Judiciary Chair Kellie Warren, a Leawood Republican. “The businesses were put in harm's way by government action.”

The Senate also was expected this week to override Democratic Gov. Laura Kelly’s veto of a provision in budget legislation leaving the final decisions on spending $4.8 billion in federal funds to top lawmakers. The GOP-controlled House voted 86-38 along party lines Monday to overturn Kelly’s action.

Kelly acted early in the pandemic to close K-12 school buildings and impose a statewide stay-at-home order for five weeks. But Republicans used their legislative supermajorities to limit her power over the state's response in exchange for keeping the state of emergency in place.

The governor agreed last year to let the State Finance Council make the final decisions over how federal COVID-19 relief funds are spent. The council has eight legislative leaders, and six are currently Republicans, but the governor is the chair, calls the meetings and can veto what the lawmakers do.

Kelly has said any change from that process would create confusion and slow the distribution of relief money.

But Republicans said Kelly still used her power to block discussions of GOP spending proposals. Their solution, which Kelly vetoed, was to give the final say to another council made up of only eight top lawmakers, six of them also Republicans.

“The Legislature had the appearance of being involved but were omitted from the discussions,” said House Speaker Ron Ryckman Jr., an Olathe Republican. “It's best that we have more say and input in the people's money and how it's being spent.”

Discussions about setting aside federal COVID-19 relief dollars to compensate businesses started after a Wichita fitness studio and its owner sued the state in December. His attorneys and Attorney General Derek Schmidt agreed to put the case on hold to allow state lawmakers to provide compensation and avoid larger potential payouts from similar lawsuits.

The bill before the Senate would make funds available to businesses with 50 or fewer employees starting in March 2020. Their claims would be decided by a three-member board in the attorney general's office, which would determine how much would be owed by the state and how much by local governments.

Democrats said the state should let cities and counties decide how to spend their coronavirus relief funds and said businesses receiving the relief dollars should be required to spend part of it on employees' pay.

And Democratic Sen. Tom Holland, of Baldwin City, derided the plan to have the state set up a “pot of gold doling out committee.” Schmidt, a Republican, is running for governor in 2022.

Meanwhile, Republicans tied their proposal to give businesses property tax rebates to renewing a statewide property tax levy that raises $752 million and is a key source of funding for public schools. The state constitution prevents the levy from being imposed for more than two years at a time, and GOP lawmakers argued that thriving businesses fund schools.

But local officials fear paying the rebates will force them to divert funds from local services. Trey Cocking, deputy director and lobbyist for the League of Kansas Municipalities, said cities generally spend 60% of their budgets on public safety.

“When there's that kind of property tax rebate, it's got to come from somewhere,” he said, watching the Senate debate from one of its galleries. “It's most likely to come from public safety.”