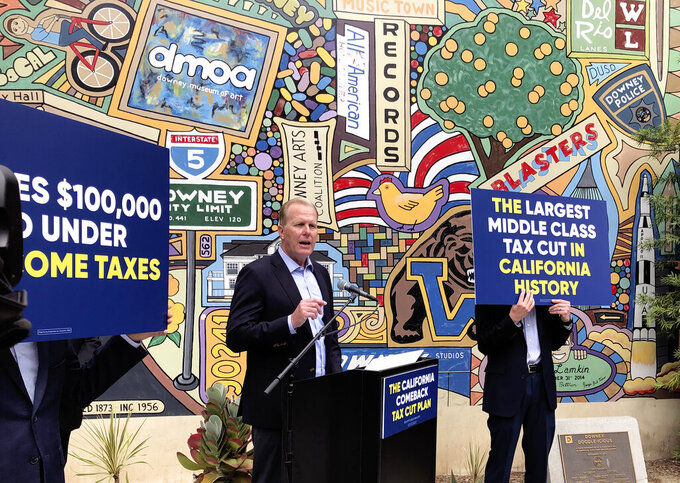 Kevin Faulconer, a Republican candidate for California governor, speaks during a news conference, Wednesday, May 12, 2021, in Downey, Calif, where he announce his $15 billion tax-cut proposal. Faulconer wants to eliminate California's state income tax for individuals making up to $50,000 and households up to $100,000 as part of a proposal to make the state more affordable for families and the middle class. (AP Photo/Michael R. Blood)

DOWNEY, Calif. (AP) — Hoping to grab a share of the spotlight in California's expected recall election, Republican candidate for governor Kevin Faulconer on Wednesday proposed ending the state income tax for individuals making up to $50,000 and households up to $100,000 as part of a plan to make the notoriously costly state more affordable for families and the middle class.

“Too often when we hear about tax relief, they're cuts for investors, for the Wall Street crowd," Faulconer said Wednesday at a campaign event in the Los Angeles suburb of Downey. “This is for young people just starting out, this is for parents who are paying for diapers or college, this is for folks working long days to put food on the table."

Faulconer, the former San Diego mayor, is among a growing list of Republican candidates hoping to oust Democratic Gov. Gavin Newsom in the all-but-certain election expected this fall.

His tax plan was unveiled at an increasingly challenging time for Republicans in their longshot bid to oust Newsom in the heavily Democratic state. The governor — blessed with an unprecedented $76 billion surplus not of his making, and billions more in federal coronavirus funding — has commanded headlines all week by rolling out a series of proposals with obvious political appeal, including checks up to $1,100 for many lower- and middle-income Californians.

The low-key event around the corner from a popular bakery didn't draw a crowd, beyond a handful of TV cameras.

A governor has limited power to reduce taxes unilaterally, so Faulconer would need approval from the Legislature to enact his plan. If he wins the recall, he would take office with Democratic supermajorities in the Assembly and Senate, which gives the party a stranglehold on power in both chambers.

Faulconer, who worked with a Democrat-majority City Council in San Diego, said he' would seek to win legislative support by first getting public buy-in.

“It’s just too expensive to live in California, period," he told The Associated Press ahead of his announcement. “I’m a big believer in going out and winning the argument publicly, and then we will win the vote."

Under Faulconer's plan, there would be a 0% marginal income tax rate on the first $50,000 in income for individuals and $100,000 for households. That means people making those amounts or less wouldn't pay state income tax, while those making up to $1 million would see a low effective tax rate.

Faulconer chose to make his announcement in the small city southeast of Los Angeles that has a median income of just more than $75,000, roughly the same as the median income statewide. It's also known for its financially ascendant Latino community. The former mayor estimated the plan would save individuals nearly $2,000 and families nearly $4,000 annually and said his plan would benefit 99% of taxpayers.

Faulconer said his proposed cuts would reduce state revenues by about $15 billion annually and pointed to the state's expected $76 billion surplus this year as evidence the state can afford it. Asked what would happen if the economy tumbled, and if he would slash programs to support a continuing, deep tax cut, Faulconer said such a drastic move wouldn’t be necessary.

“As mayor, having to balance many budgets, it’s about priorities. It’s about spending dollars on what’s important, on services that Californians actually need and expect and deserve," he said.

He further said Sacramento has a “spending problem." But he declined to give any specific details on what views as excess or what he would cut.

California's budget relies heavily on personal income tax from the wealthiest Californians — those making more than $1 million annually — and their taxes would not change under Faulconer's plan.

Republicans regularly complain that California's high taxes make the state unaffordable for people and are causing the rich to flee. They point to high-profile examples of companies such as Oracle and Hewlett Packard moving their headquarters out of California.

The governor's campaign did not immediately comment on Faulconer's proposal.

A recent study by the Public Policy Institute of California found the state is losing lower and middle-income people and those without college degrees, while it's gaining higher-income people with degrees. State officials announced last week that California's population declined by 182,000 in 2020, and the state lost a U.S. House seat for the first time ever with last month's release of Census data.

Faulconer also pledged not to raise taxes if he wins. But a governor also lacks that power. He could veto legislation raising taxes, but the Legislature could override him with two-thirds votes in both chambers.

He would also exempt veterans' income from military retirement from being taxed.

Faulconer has the most political experience of any Republican in the race, and he's looking to craft himself as a credible alternative to Newsom, compared to his rivals. Cox, who lost to Newsom in a landslide in 2018, last week campaigned alongside a bear as he branded himself the “beast" and Newsom a “pretty boy" who fails to make tough decisions.

Jenner, meanwhile, did not appear well-versed in California's policy issues during her first television interviews last week. Her campaign did not immediately comment on Faulconer's proposal.