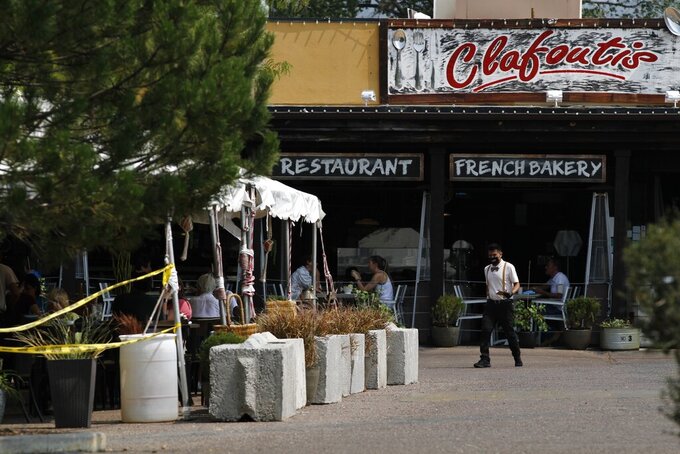 A waiter carriers a check to a patron seated in a tent in the parking lot of Clafoutis restaurant on Monday, Aug. 24, 2020, in Santa Fe, New Mexico. The tent was rented after indoor seating was banned due to COVID-19, leaving only a handful of patio tables available. Patrons still pick up to-go orders inside. (AP Photo/Cedar Attanasio)

SANTA FE, N.M. (AP) — New Mexico's governor is calling a special legislative session next week in the hope of providing new economic relief to those who lost their jobs and small businesses that are reeling from the coronavirus pandemic and aggressive health restrictions.

The Democratic governor said the plan includes a weekly $300 supplement to the unemployed. She wants the Legislature to meet for one day, next Tuesday, to work out an agreement.

New Mexico this week implemented one of the strictest lockdowns in the country, attempting a “reset” on the outbreak, with closures extending to all restaurants and many other businesses. The vast majority of schools also are closed.

Lujan Grisham and a top health adviser are warning people to avoid gathering with other households for Thanksgiving.

The governor said the virus is overwhelming the state's capacity to trace infections and warn people about exposure, acknowledging that New Mexico is awaiting a federal delivery of three cold storage trailers to accommodate the bodies of COVID-19 victims.

“When you have these exponential increases, we run out of actual people to do the work that’s necessary to carry out operations like testing,” Lujan Grisham said.

Meanwhile, more retail stores are shutting down in-person sales amid the critical holiday shopping season because of changes Lujan Grisham made to her health order to try to shrink a loophole for big-box stores. Others have closed for at least two weeks after staff members tested positive for COVID-19.

As of Thursday, Lujan Grisham is allowing big box stores to stay open as long as they offer essential goods and services.

The governor has been criticized for allowing chain stores like Walmart to allow in-person customers for nonessential purchases like TVs, along with essential ones like groceries, while small businesses selling only nonessential goods can't open.

Under the updated order, essential goods like food and animal feed now must account for more than one-third of a store’s revenue for it to allow customers inside. Bike stores and mechanic shops can stay open, as long as transportation-related goods and services make up half or more of their revenue.

State officials said stores like Hobby Lobby and Ross Dress for Less would have to end indoor sales for now. Curbside sales and delivery are allowed.

Some other big-box stores closed because of workers' infections.

Walmart Supercenters in Albuquerque, Santa Fe and Las Cruces were told to close Wednesday after more than four staffers who were in the stores over a two-week period tested positive for COVID-19, the New Mexico Environment Department said. A Target in Santa Fe has been closed since Nov. 13.

Those stores could reopen after two weeks.

“When the store reopens, in addition to continuing with all our preventative measures, (we) will test associates in this store, as we are doing with all of our workers in New Mexico," Walmart spokeswoman Anne Hatfield. “We have protocols in place to help ensure compliance with the requirements of New Mexico health and safety orders, and we will continue working with local and state officials as they work to manage this health crisis.”

The website for outdoor recreation retailer REI showed stores in Santa Fe and Albuquerque were open.