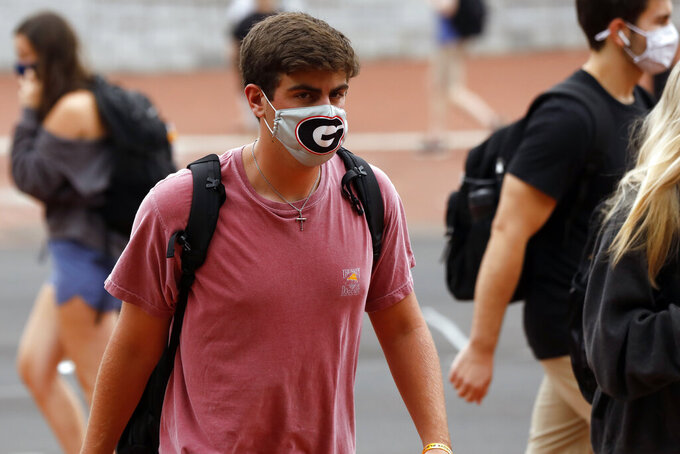 Those factors boosted total enrollment at the 26 schools governed by the University System of Georgia to more than 341,000 students this fall, up 2.4% from last fall. The system outperformed other public and private colleges nationwide, according to numbers presented Wednesday to regents.

“These programs continue to grow because they offer high-quality degrees that help students achieve their goals, even in the midst of a pandemic," Bonnie Ferri, Georgia Tech's vice provost of graduate education and faculty development, said in a statement.

Angela Bell, the system’s vice chancellor for research and analysis, told regents that waiving the requirement for students to take the SAT and ACT this year, holding tuition flat, and stating early that campuses would be open for resident students and some classes would take place in person all may have driven enrollment increases.

The strains of the coronavirus pandemic may be showing among the system's smallest and least selective institutions, though. Of the 10 schools that saw enrollment drop this fall, eight are in the state college category. While all of those schools offer four-year degrees, many have enrollment concentrated among students seeking two-year degrees, functioning more like community colleges.

Students at those schools may be affected the most by the hardships of the pandemic, Bell said. Normally, enrollment in community colleges rises sharply during recessions as adult workers enroll for associate's degrees seeking new skills. But this fall has instead seen a drop, and officials are still trying to figure out what's going on. Overall, adult undergraduate enrollment has also continued to fall in the system, and associate's degree enrollment was down 10%.

Another big influence on enrollment was the system's decision this spring to waive its requirement for students to take the ACT or SAT college tests before starting classes at most colleges. By that time, the state's most selective universities were almost done admitting students. But Bell said it wasn’t too late for students to enroll once those gateway tests were dropped, or to trade up to more selective institutions such as Valdosta State or Kennesaw State, which both saw big enrollment boosts. The system ended up with a bumper crop of first-time freshmen as numbers rose to more than 54,000 from about 51,000 in fall 2019.

“I do not think we would have seen that huge increase in first time freshmen this year had we not relaxed our SAT and ACT requirements," Bell said.

Officials also announced that a record 80% of last year's freshmen had returned for a second year of classes and that 35% of students had graduated in four years. The system has focused for several years on trying to ensure more students earn degrees on time.

“As we rise above the pandemic’s challenges, USG remains committed to helping Georgia succeed by being more affordable, more efficient and most of all, preparing more students for life and work with a college degree,” Chancellor Steve Wrigley said. ___