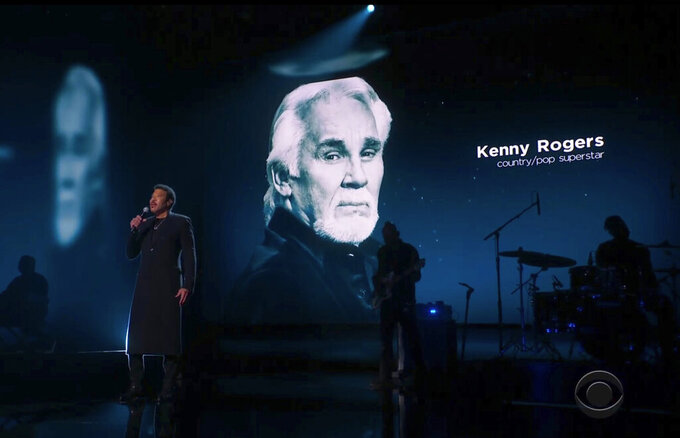 In this video grab provided by CBS and the Recording Academy, Lionel Richie performs during the In Memoriam as Kenny Rogers is pictured on screen at the 63rd annual Grammy Awards at the Los Angeles Convention Center on Sunday, March 14, 2021. (CBS/Recording Academy via AP) 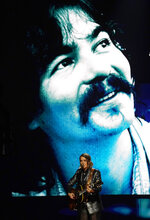 In one of four performances interspersed between the names and faces in the montage of the past year's dead, Carlile sang “I Remember Everything” for Prine, one of the musical artists lost to the coronavirus, along with country singers Charley Pride and K.T. Oslin, musician and composer Adam Schlesinger, folk singer Trini Lopez and many others.

Carlile told The Associated Press that it didn't bother her to be performing without an audience at the pandemic-restricted Grammys because "this time I’m just performing for John Prine. It’s just for John, and I know he’s there.”

Mars, joined by Anderson .Paak blazed through Little Richard’s “Good Golly Miss Molly” and Richie sang “Lady,” the ballad he wrote and Rogers made a hit, adding, “I miss you Kenny” as he ended.

Among those named in the montage was jazz pianist Chick Corea, who won two Grammys on Sunday only about a month after his death.

Corea, who died of a rare form of cancer at age 79, won the trophy for best improvised jazz solo and best jazz instrumental album.

Host Trevor Noah introduced the segment by telling viewers that they can see the names of nearly 1,000 people in the music industry who died in the past year at Grammys.com.