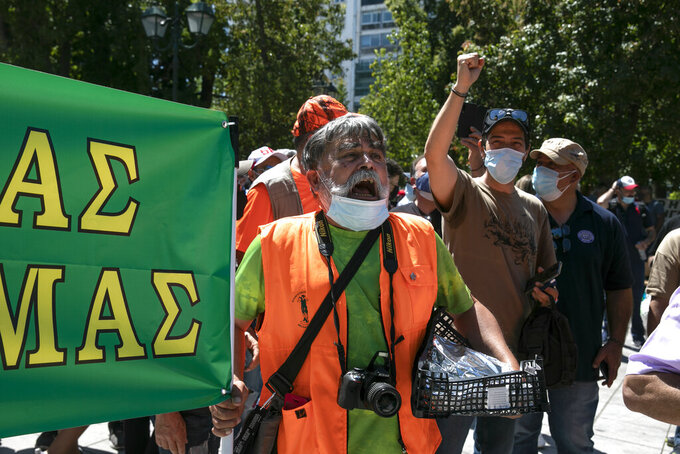 A dog owner shouts slogans during a rally against a proposed law by the government related to household pets, at Syntagma square, in Athens, Sunday, May 23, 2021. Several hundred dog owners, most of them also hunters, and their pets, protested outside the Greek Parliament Sunday against a new law, still at the consultation stage, that mandates sterilization of household pets. (AP Photo/Yorgos Karahalis)

ATHENS, Greece (AP) — Several hundred dog owners and their pets gathered Sunday outside Greece’s Parliament in protest against a draft law that will make sterilization of household pets — especially cats and dogs — mandatory.

The dog owners railed against the bill’s “abolition of amateur breeding, the backbone of dog loving,” as they called it in a statement. Most of them were also hunters and protested against last year’s ban on hunting, due to the coronavirus pandemic.

Government officials have said the bill does indeed target so-called “amateur breeding” by non-specialists, who do it for the money. They say there are often abusive practices, with female dogs forced to breed continuously for maximum profit and often discarded when of no further use to the breeder.

The protesters saw it differently, and were often emotional about it.

“We are here to show our love to our children. They are not just our dogs, (they are) what we have been loving since we were kids and those who govern want to take them away from us,” a tearful Christos Xiros, one of the protesters, told The Associated Press.

The protesters dispersed peacefully after chanting slogans and listening to a speech.

The draft bill is still at the consultation stage. It will then be submitted to Parliament.

Srdjan Nedeljkovic contributed to this report.