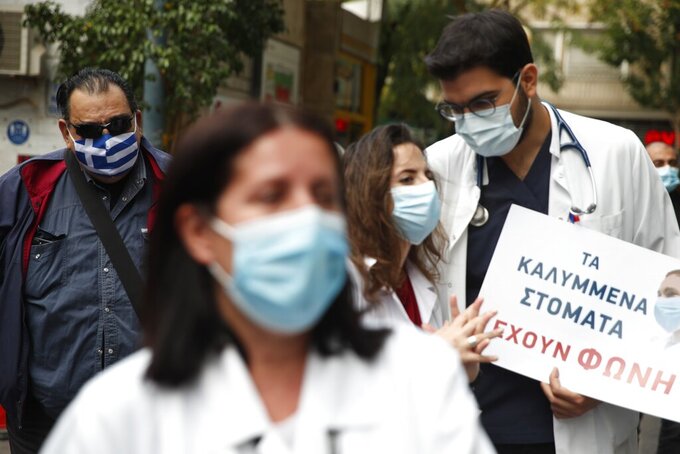 A retired health worker wearing a face mask with the Greek flag, and man right holding placard reading "The covered mouths have voice" during a protest at Evangelismos hospital in Athens, Thursday, Nov. 12, 2020. State health workers' union staged protests at several hospitals around the country to demand more hiring. Greece has imposed a nationwide nightly curfew as the number of COVID-19 cases in the country continues to surge despite a lockdown. (AP Photo/Thanassis Stavrakis)

ATHENS, Greece (AP) — Dozens of hospital workers held protests at hospitals in Greece Thursday, demanding more medical staff be hired as the country struggles to contain a resurgence of the coronavirus that has led to a new lockdown being imposed.

An increase in the number of people seriously ill with COVID-19 has brought the country’s health system under increasing pressure. As of Wednesday night, Greece had a total of 1,104 intensive care unit beds, of which 496 were set aside for COVID-19 patients. Of those, 335 are already occupied.

On Thursday, authorities reported 50 new deaths and more than 3,300 new confirmed infections — both record high daily numbers. Greece’s total confirmed COVID-19 infections stand at 66,637 with an overall death toll of 959 in the country of around 11 million.

The government has stressed it has massively increased intensive care capacity, noting there were a total of just over 500 ICU beds in Greece when it came to power after elections in mid-2019.

“Every humanly possible effort was made so that we can, in the intervening time between the first wave and where we are today, reinforce the ICUs with beds and personnel,” Prime Minister Kyriakos Mitsotakis said Thursday during a Parliament debate on the government’s handling of the pandemic. “Whatever was humanly possible ... has been done and continues to be done.”

Mitsotakis said that no matter how many ICUs a country has, “and obviously we prefer to have more rather than fewer, a health system cannot cope if we do not hit the problem at the start of the chain. The start of the chain is the uncontrolled spread of the virus mainly through crowding and contact with people we do not know.”

The prime minister said the resurgence of the virus in Greece and the rest of Europe was due to “young people having fun. I’m not saying this as criticism, of course young people are more susceptible to such behavior. But it’s an observation and it needs to be heard.”

Greece imposed an early lockdown during the pandemic's initial outbreak in the spring, a move credited with keeping the number of deaths and seriously ill very low. But a resurgence of the virus this autumn has led to a rapidly increasing number of people in intensive care units, and a sharp increase in deaths.

Those hospitalized include the Greek Orthodox Archbishop of Albania, Anastasios, who was airlifted to Greece from Tirana on Wednesday after showing mild symptoms of COVID-19 and testing positive.

A hospital statement Thursday said the 91-year-old archbishop was in stable condition in intensive care with mild respiratory symptoms and a low fever.

Meanwhile, Foreign Minister Nikos Dendias, who has been in self-quarantine since Wednesday after coming into contact with someone who tested positive, said he had received a phone call from his Turkish counterpart, Mevlut Cavusoglu, who inquired about his health.

Relations between Greece and Turkey have been particularly tense in recent months, mainly due to a dispute over drilling rights in the eastern Mediterranean.

Dendias tweeted that he had thanked Cavusoglu for the call, and stressed he was in quarantine only for preventative reasons. Greece's deputy foreign minister is also in self-quarantine for the same reason.