Greek soccer to restart with rivalry on field and in court 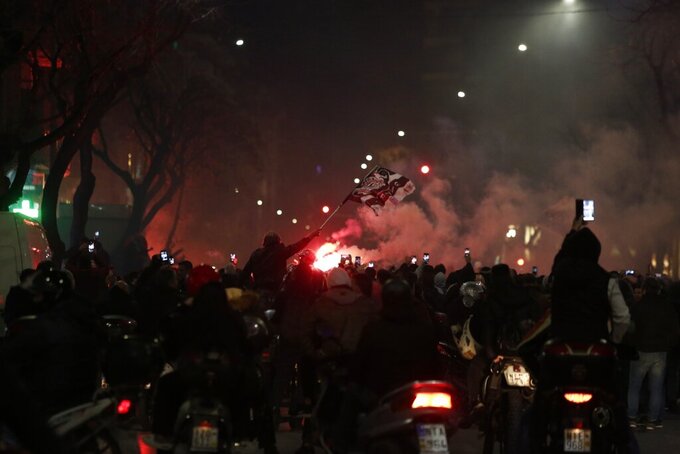 FILE - In this Thursday, Jan. 30, 2020 file photo, PAOK fans join a protest against the government, accusing it of siding with their rivals from the Greek capital, in the northern port city of Thessaloniki, Greece. Soccer restarts in Greece this weekend with the fierce rivalry between a runaway league leader and defending champion playing out on the field and in a court in Switzerland. Unbeaten Olympiakos travels to second-place PAOK on Sunday June 4, 2020, in the first Super League championship round _ a new, 10-round playoff for the top six in the regular season table. (AP Photo/Giannis Papanikos, File)

GENEVA (AP) — Soccer will restart in Greece with runaway league leader Olympiakos facing defending champion PAOK Thessaloniki on the field this weekend and soon at a court in Switzerland.

Unbeaten Olympiakos travels to second-place PAOK on Sunday to begin play in a 10-round playoff for the top six teams in the regular-season standings.

The fresh format and smaller 14-team league seems to have worked this season. Numbers are up for goals scored and average attendances, though games will resume in empty stadiums.

“The passion for football in Greece is known,” league president Minas Lysandrou said in a telephone interview. “It’s even more powerful because they miss football.”

Intense rivalries are also a staple of Greek soccer, and a PAOK-Olympiakos clash is a big way to begin after the three-month shutdown.

The teams are set to play twice in the season-ending playoffs and again at the Court of Arbitration for Sport in Switzerland on a date to be decided.

The case at CAS is about a seven-point deduction imposed in March that could cost PAOK entry to next season's Champions League or result in relegation to the second division.

PAOK has appealed to CAS against the Greek soccer federation’s appeal verdict that it broke ownership rules by having a stake in league rival Xanthi.

The complaint was originally filed by Olympiakos, which also appealed to CAS.

Olympiakos wants PAOK and Xanthi relegated by rules that were in place until January, when national lawmakers intervened. Xanthi was deducted 12 points and now faces relegation on the field and in court.

Olympiakos, which led PAOK by seven points even before the deduction, looks sure to claim one of Greece’s two places in the Champions League qualifying rounds. The legal dispute left PAOK only one point ahead of third-place AEK Athens.

Lysandrou, who is also chief executive of 2018 champion AEK, declined comment on the case.

On the field, Olympiakos is favored to win a 45th league title after going back-to-back seasons without the trophy for the first time since the mid-1990s.

The Olympiakos revival has been good for business, and the team is still in the Europa League after beating Arsenal in the round of 32.

“We made it closer to the high standard of the championships we see on television,” the league president said.

In a league that often made headlines for match-fixing claims and disorder in stadiums, Lysandrou said fans of away teams were allowed to attend more games this season though not yet at city derbies in Athens.

He cited a new title sponsorship deal being “very close to finalizing” as a show of faith in improving the league's reputation.

Still, the coronavirus pandemic has caused financial uncertainty for clubs across Europe. Financial consultants have been hired to flag up risks and possible consequences of clubs losing key income, Lysandrou said.

Greece went into lockdown early and has been one of the most successful countries in Europe in keeping numbers of virus cases down.

“We know what needs to be done,” he said, adding fans could be back before the league season ends, likely on July 19 or 26.

“We have filed a plan to the public authorities to evaluate if, in the second stage (of relaxing restrictions), we will be able to allow supporters in,” Lysandrou said. “I’m very confident that we have a chance to do it.”