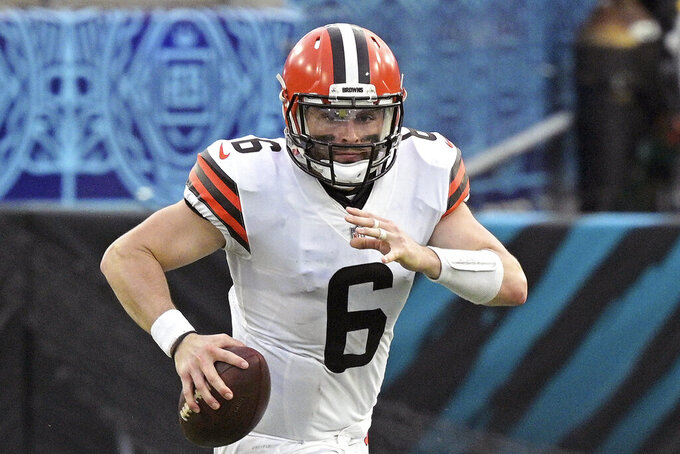 Cleveland Browns quarterback Baker Mayfield (6) scrambles for yardage during the second half of an NFL football game against the Jacksonville Jaguars, Sunday, Nov. 29, 2020, in Jacksonville, Fla. Mayfield made some head-scratching, jaw-dropping mistakes Sunday in Jacksonville, turning what should have been a fairly routine win for the Browns into a nail-biter. But despite his errors, Mayfield didn't commit a quarterback's biggest sin _ an interception. (AP Photo/Phelan M. Ebenhack)

NASHVILLE, Tenn. (AP) — The Cleveland Browns are about to get a sense of just how good they might be this season.

So are the Tennessee Titans.

Tennessee poses the biggest test yet for the Browns (8-3) who have only one win over a team currently with a winning record. The rest of Cleveland’s wins have come at the expense of the NFC East, twice against Cincinnati and a 3-0 mark against the Titans’ weak divisional brethren in the AFC South.

“These are the things that we have been trying to build up to, and we are here now,” Browns quarterback Baker Mayfield said. “We are in the middle of it, so let’s seize the moment.”

This is the Browns' best start since 1994 as they target their first playoff spot since 2002. They haven’t started 9-3 since '94. They've won three straight — by a combined 10 points against struggling Philadelphia and Houston before they held off Jacksonville 27-25 last week.

The Titans are back on top of the AFC South after road wins over Baltimore and a 45-26 rout of Indianapolis, trying to win their first division title since 2008.

Avoiding a letdown will go a long way toward proving they’re really among the AFC’s best. They deflated the Browns in Cleveland 43-13 in the 2019 opener but had to earn a wild-card berth in the regular-season finale.

“Hopefully we’re going out there with an attitude that we’re going to be hunting every single week, regardless of what our record is,” Titans coach Mike Vrabel said.

This game pits the NFL's top rushing offenses. The Browns average a league-best 161.4 yards per game with Nick Chubb and Kareem Hunt, while Derrick Henry has the Titans at No. 2 as he chases a second straight rushing title. He won last year's by 46 yards over Chubb.

“It’s going to be a good matchup against those guys," Henry said.

Henry has been at his best once the calendar flips to December. Since he was drafted in 2016, nobody has run for more yards or touchdowns in December than Henry, who has 1,511 yards averaging 5.38 yards per carry with 18 TDs.

He comes into his first December game this season having run for at least 100 yards in three straight matches, including 178 last week, giving him a league-best 1,257 yards.

“His consistency is very admirable,” Titans quarterback Ryan Tannehill said. “His ability to play physical week in and week out, take hits and be seemingly unfazed by them. Definitely want to keep him rolling as we get deep into December.”

Just in time to face the freight train that is Henry, Cleveland’s defense gets back its biggest piece as star end Myles Garrett returns after missing two games with COVID-19. Coordinator Joe Woods joked that he might have broken virus protocols and hugged Garrett upon his return to practice.

“It was good to see his face out on the field,” Woods said. “He looks good.”

Garrett was leading the NFL in sacks before getting sick. While the Browns managed to win twice without him, they weren’t the same and his return provides a huge confidence boost. Garrett’s illness may prevent him from his normal workload Sunday, but the Browns will take whatever they can get.

The Titans have the fewest turnovers in the NFL this season with five through 11 games. It's the best start in franchise history and also their fewest turnovers at this point of the season since at least 1960. Tannehill has been a big key with only four interceptions.

Vrabel joked they told Tannehill they'd bench him if he throws interceptions.

“I think he studies. I think he has good vision. I think he’s decisive,” Vrabel said of Tannehill. "Sometimes interceptions occur when quarterbacks hold on to the football and second guess or are not really quite sure and they were a little late on it and guys have had time to recover or make a better break on the football.”

Browns right tackle Jack Conklin will feel right at home Sunday. Conklin spent four seasons with Tennessee, which drafted him in 2016, before he signed as a free agent with Cleveland in March.

Revenge isn’t his motive this week as much as a reunion.

Conklin, who has stabilized the Browns’ right side and boosted their running game, became eligible for free agency after the Titans didn’t pick up his fifth-year contract option. He had been slowed by knee injuries over two seasons.

Before he played for Bill Belichick in New England and got to know him personally, Vrabel was no fan of the legendary coach. Vrabel grew up in Northeast Ohio rooting for the Browns and didn't like that Belichick got rid of his favorite player, Bernie Kosar.

Now it's a different situation with Vrabel coaching the Titans.

“I’ve always said that it’s been an honor and a privilege to play and be able to coach in this league, going all the way back to the Kardiac Kids back in Cleveland,” Vrabel said.