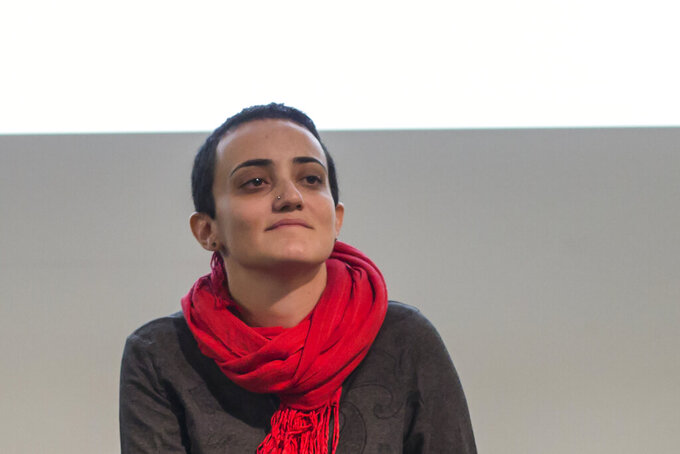 In this Nov. 24, 2017 photo, Lina Attalah, editor-in-chief of Mada Masr, a prominent investigative media outlet in Egypt, participates in a panel discussion at cultural center in Cairo, Egypt. Mada Masr said editor Lina Attalah was arrested Sunday, May 17, 2020, outside Cairo’s Tora prison complex. She was there to interview the mother of a prominent jailed activist. It's the latest arrest amid a wider crackdown on dissent. (AP Photo/Roger Anis)

CAIRO (AP) — Egypt’s security and judicial authorities have been using the coronavirus pandemic to renew pretrial detentions of hundreds of people since mid-March, further depriving many of due process, an international rights group said Monday.

Human Rights Watch said hundreds, and most likely thousands, are in detention in Egypt without even “a pretense of judicial review," saying that this is a government tactic.

The New York-based group called for judges to review the case of all those in prolonged pretrial detention and order their release pending trial unless there is clear, legal evidence they should be held.

HRW cited lawyers as telling the group that Egypt’s Supreme State Security prosecutors and criminal court judges have renewed detentions, including for scores of their clients, without transporting detainees to hearings or giving lawyers the opportunity to enter pleas.

Citing rights lawyers, HRW said authorities did not hold detention renewal hearings between mid-March and the beginning of May, when courts partially closed under measures to curb the spread of coronavirus.

Instead, courts in Cairo and Giza renewed in early May the detentions of more than 1,600 defendants in over 100 cases, without their presence in the courtroom.

Under el-Sissi, thousands have been routinely kept in pretrial detention, often without evidence of wrongdoing and for merely exercising their rights to peaceful assembly and free expression, HRW said.

There was no immediate comment from the government on the report but charges of violations have repeatedly been denied in the past. Authorities say they are fighting terrorism and have accused rights groups of working with foreign entities to undermine the state.

El-Sissi led the military’s removal in 2013 of the country’s first democratically elected, Islamist president, Mohammed Morsi, after his one-year rule proved divisive, sparking nationwide protests. Since then, el-Sissi has overseen an unprecedented crackdown on dissent and media, silencing critics and jailing thousands.

On Sunday, authorities briefly detained Lina Attalah, editor-in-chief of Mada Masr, an investigative media outlet, outside Cairo’s Tora prison while she was conducting an interview with Laila Soueif, the mother of jailed activist Alaa Abdel Fattah.

Attalah was accused of filming a military facility without permission — likely referring to the prison. She was fined 2,000 Egyptian pounds ($125) and later released from a Cairo police station.

A spokesman for the interior ministry, which oversees the police, did not respond to phone calls and a government press officer also declined to comment.