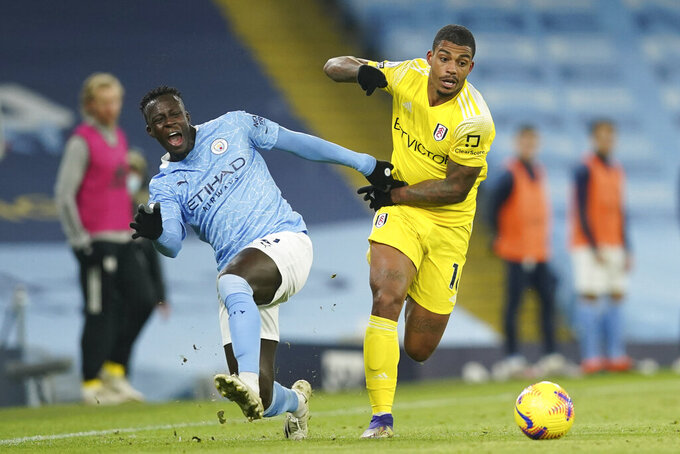 While Pep Guardiola accepted that Mendy was wrong to host the gathering at his house, the City manager still defended his player's actions on Sunday.

“He broke the rules,” Guardiola. “Of course it was not correct what he has done, but don't judge him much because if you look ... New Year's Eve many, many people have maybe done the same.”

Mendy’s rule-breaking took place after City's game at Everton on Monday was called off. Six players are isolating with the coronavirus, with defender Eric Garcia's positive test announced Sunday.

Despite the risk of being infected at the gathering, Mendy was an unused substitute for Sunday's game at Chelsea where City was one player short on the bench.

“Benjamin had already COVID so he had it in the past,” Guardiola said. “He has been tested every day like all the guys ... and is negative."

Contracting the coronavirus is not considered to provide any certainty against future infections.

The Premier League has not condemned any players from City, Tottenham, West Ham, Fulham and Crystal Palace who have been seen over the Christmas period appearing to flout COVID-19 restrictions that have been tightened in response to a new variant, which scientists have said is up to 70% more contagious.

Mendy allowed a chef and two friends of his partner to come to his home, a representative for the player was cited as telling "The Sun" newspaper. People from different households are banned from mixing indoors in the northern English area where Mendy lives.

“The club is aware of a New Year’s Eve COVID-19 breach involving Benjamin Mendy and the subsequent media reporting of it," City said.

“While it is understood that elements of this incident have been misinterpreted in the reports, and that the player has publicly apologised for his error, the club is disappointed to learn of the transgression and will be conducting an internal investigation.”

The Frenchman has expressed regret.

“Ben accepts that this is a breach of COVID-19 protocols and is sorry for his actions in this matter," his representative said in a statement to “The Sun” newspaper. "Ben has had a COVID test and is liaising with Manchester City about this.”

Mendy has tweeted urging people “to take care of you and yours” as midnight approached on Thursday night.

Britain is in the midst of an acute outbreak, recording more than 50,000 new coronavirus infections a day over the past six days.

The players are facing disciplinary action at Tottenham as Manuel Lanzini is at West Ham after also attending the party.

Fulham, whose match at Burnley on Sunday was postponed due to rising infections at the London club, is investigating pictures showing Aleksandar Mitrovic and his fellow Serb Luka Milivojevic of Crystal Palace, along with their two families on New Year's Eve.