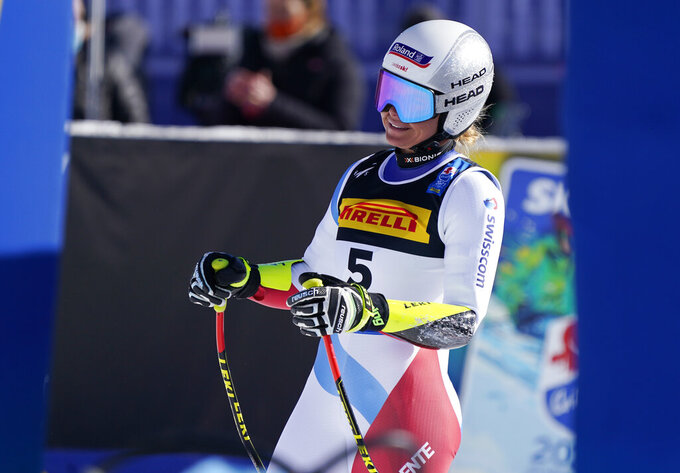 Switzerland's Corinne Suter smiles as she arrives at the finish area during the women's super-G, at the alpine ski World Championships in Cortina d'Ampezzo, Italy, Thursday, Feb. 11, 2021. (AP Photo/Giovanni Auletta)

CORTINA D'AMPEZZO, Italy (AP) — Lara Gut-Behrami dashed to gold in the women’s super-G at the skiing world championships Thursday, and Mikaela Shiffrin took bronze in her first speed race in more than a year.

Gut-Behrami mastered the sun-bathed Olympia delle Tofane course to finally win the only medal missing from her storied career.

The 2016 overall World Cup champion beat Swiss teammate Corinne Suter by 0.34 seconds, living up to her billing as the main favorite after winning the last four super-Gs on the World Cup circuit.

“I tried to put that aside. I just wanted to ski like I usually do,” said the Swiss skier, who had six medals from previous major events, including Olympic bronze in downhill from the 2014 Sochi Games. “The difference this time is that I didn’t dream about gold. I didn’t want to do that.

“I never thought I was supposed to win a gold,” she added. "My career should not be judged by the fact whether I won one gold medal or not.”

Shiffrin finished 0.47 behind in third, edging Olympic super-G champion Ester Ledecka by six-hundredths of a second after missing a chance to win gold.

Shiffrin had the fastest split times but lost her balance and got twisted around near the bottom of the course. She needed to put her right arm and pole behind her to regain control but was slowed by skiing through soft snow alongside the track.

She lost more than eight-tenths on Gut-Behrami from the final split and briefly shook her head and shrugged her shoulders after finishing.

“I thought the plan I had from inspection would be the fastest, but I didn’t know if I could execute everything," Shiffrin said. “And in the end, I executed like 98%.”

The two-time Olympic champion had not raced in a speed event since last January, 382 days ago.

She took a 10-month break from racing following the death of her father, Jeff Shiffrin, in early February, and only competed in her main events — slalom and giant slalom — since returning to the circuit in November.

“It’s a disappointment not to win gold. But after a year of not starting in super-G and some really, really good training in the last two weeks, I was able to ski the way that I wanted to. Even when I made a mistake, I still felt good about my skiing,” Shiffrin said.

The opening race of the worlds ended in disappointment for the home Italian team, though the course with a steep start and an almost giant slalom-like middle section seemed to fit their best racers.

Deprived of their biggest star, the injured Sofia Goggia, and with no fans attending because of strict anti-coronavirus measures, Federica Brignone and Marta Bassino finish in 10th and 11th, respectively.

“The worst thing today was the silence,” said Brignone, who is the defending overall World Cup champion. “When I reached the finish, I had no idea how I did.”

Bassino, who opened the race wearing bib No. 1, said “it’s a mix between excitement that we finally started but disappointment at the lack of atmosphere.”

The race took place in sunny but windy conditions after bad weather postponed all events over the previous three days.