Hands to yourself: Complying with protocols proves difficult 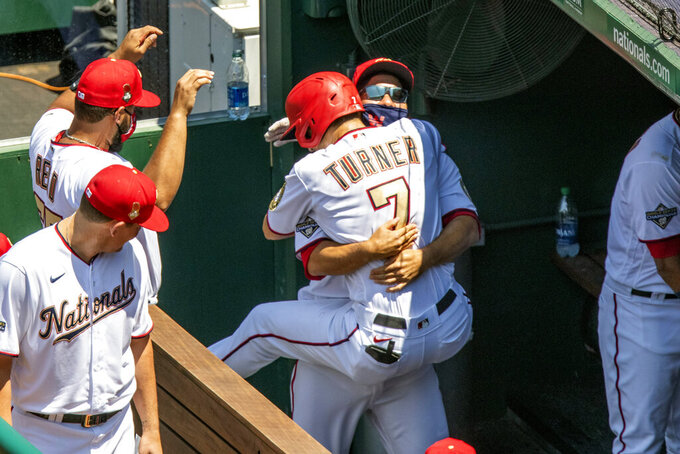 Washington Nationals' Trea Turner jumps into the arms of a teammate after his solo home run during the third inning of a baseball game against the New York Yankees at Nationals Park, Sunday, July 26, 2020, in Washington. (AP Photo/Alex Brandon)

From players ignoring prohibitions on handshakes, high-fives and hugs, to some sitting noticeably closer than six feet apart in dugouts during games, the recently launched baseball season has provided ample evidence old habits are hard to shake, even when the changes are meant to mitigate the risk of spreading the coronavirus.

The outbreak among Miami Marlins players has highlighted the major leagues' vulnerabilities, though teams were already reexamining approaches after the first few days of play.

“We have to do a better job,” Seattle Mariners manager Scott Servais said. “I think we’re saying all the right stuff but when you watch the games we have to do the right thing.”

Major League Baseball on Tuesday suspended the Marlins’ season through Sunday following the positive tests on the team and the Philadelphia Phillies, who hosted Miami last weekend, will remain idled until Friday. It's not clear how the virus spread among Marlins players, though the cascading postponements have focused attention on safety protocols.

Teams were aggressive in the ramp up to the season while preparing to return to the field during the pandemic. Having players dress outside of cramped clubhouses, utilizing empty stands as auxiliary dugout space, giving players the option to wear masks during games and restricting sports reporters’ access to team personnel are the new normal around the league.

But they haven't been able to totally curb players' natural tendencies to engage in physical contact during the ebb and flow of actual games.

In Oakland, a series between the Athletics and visiting Angels featured several instances of suspect social distancing. One of the most glaring was on Friday when A’s players swarmed Matt Olson after a game-ending grand slam in the 10th inning that punctuated their 7-3 win.

“Instinctually you want to celebrate a big win like that, so I think you try to progress,” A's manager Bob Melvin said. “I’m on record saying it’s not going to be perfect at the beginning and maybe something like this that’s going on with the Marlins creates more awareness and more caution as far as that goes. If that’s the case, then it’s probably a good thing.”

On Saturday, Boston's Jackie Bradley exchanged elbow bumps with a few teammates as he entered the dugout after a diving catch, only to get an exuberant natural high-five from teammate J.D. Martinez.

Pittsburgh Pirates pitcher Joe Musgrove said social distancing does have negative effects on team interaction that are hard to overcome.

One of the immediate changes Los Angeles Angels manager Joe Maddon said his team plans to implement is having a large room on their next road trip where players can gather but remain spaced out while playing video games or hanging out after night games. There will also be another room for coaches.

“I think it’s really important to trace how it (Marlins outbreak) occurred, that’s the one thing we need to know first before you jump to a lot of different conclusions,” Maddon said. “To me, if there was a breach of protocol by any of those players then it’s more easily explainable and if not then it becomes more problematic.”

Melvin said the A’s are still working on how, or if, to tweak the protocols they already have in place. Masks aren’t mandatory for players, but they are for the coaching staff.

Servais said the violations of protocol he’s seen have been on the field more than off of it.

“I don’t really see it in our clubhouse and the batting cage pregame. It’s been really good,” he said. "But when the game starts, and the competitive nature of everybody kind of takes over and your emotions get running high.”

If nothing else, Red Sox manager Ron Roenicke hopes the recent developments around the league will help increase players’ awareness.

“I’m hopeful that it scares them a little bit into (thinking),” he said. “We’ve been good at this but we could be better.”

But the truth is, it may never be perfect.

“It’s a little different environment than other work environments that people are trying to stay healthy in, just the nature of the sport,” said Cincinnati Reds manager David Bell. “That’s not an excuse, it’s the reality.”