Harvick cherishes Atlanta win, looks to help off the track 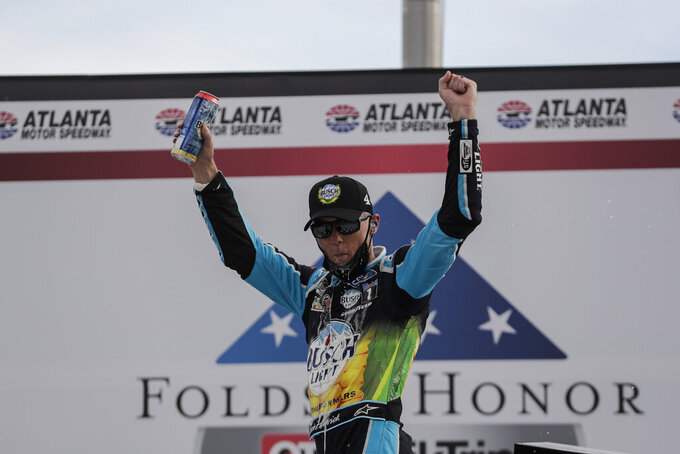 HAMPTON, Ga. (AP) — After another dominant performance at one of his favorite tracks, Kevin Harvick relished the past and looked ahead to the future.

He wasn't entirely focused on what he can do behind the wheel.

Harvick cruised to victory Sunday over Kyle Busch and Martin Truex Jr. in the NASCAR Cup race at Atlanta Motor Speedway, leading the final 55 laps on a day that began with the series acknowledging the social unrest in the country.

Before taking the green flag, the 40 cars stopped in front of the towering, empty grandstands on the front stretch to listen to a message from NASCAR president Steve Phelps and observe a 30-second moment of silence in the wake of George Floyd's death while in police custody.

Harvick also joined other drivers in making a video that promised to push for much-needed changes in the fractured nation.

“Something has to change. When you look at what happened in Minneapolis, it's just disgraceful to everyone," he said. “It's just unbelievable to sit and watch these things happen. It's really confusing. It makes you confused and mad. Now we know what we need to do and where to start.”

Harvick won for the second time since NASCAR returned from the shutdown caused by the coronavirus pandemic, adding to his emotional victory at Darlington in the first race back.

Harvick came into the day having led 1,138 laps on the 1.54-mile Atlanta trioval, far more than any other driver in the 40-car field.

This one was more of the same. Harvick was out front for 151 laps — more than twice as many as anyone else — and claimed his a third victory in Atlanta, where he got first Cup triumph in 2001 and another win two years ago.

“For me, this place is pretty special," said Harvick, who beat Busch by more than 3 1/2 seconds, with Truex nearly 5 seconds behind. “It brings back a lot of memories.”

On a reverse victory lap, Harvick held three fingers outside his car, a tribute to the late Dale Earnhardt. Harvick was the driver who replaced Earnhardt after the seven-time champion was killed in a crash at Daytona in 2001.

“To celebrate the life of Dale Earnhardt and everything he meant to our sport, is obviously pretty special to me,” Harvick said.

He now has 51 wins — breaking a tie with Ned Jarrett and Junior Johnson for the 12th spot on the career list.

“You just shake your head and say, ‘Man, I can’t believe this is happening,'" Harvick said. “It's pretty crazy when you think about. I've been very lucky to drive cars for a living.”

Seven-time Cup champion Jimmie Johnson, in what may have been his final Atlanta appearance, was given the honor of delivering the “start your engines” command to his fellow drivers. The speedway also renamed a grandstand in honor of Johnson, who is retiring as a full-time competitor at the end of the year.

A five-time winner on the 1.54-mile trioval, Johnson had another strong run in Atlanta. But his seventh-place showing extended a winless that stretches back more than three years.

NASCAR returned to Atlanta to make up a race that was initially scheduled for March 15. It became the first race to be postponed as U.S. sports largely shut down to deal with a pandemic that has now claimed more than 110,000 American lives.

This time, it was the spot where NASCAR waded into the debate over the injustices endured by African Americans — a striking move for a sport that once embraced Confederate symbols and still struggles to overcome its perception as a conservative bastion reserved largely for whites.

Bubba Wallace, the only African American in the Cup series, donned a black T-shirt with the words “I Can’t Breathe” and “Black Lives Matter” while standing on pit road before the race.

Wallace finished 21st and appeared to faint after climbing from his car on a blistering day when temperatures climbed into the mid-80s. He said he was OK and did a portion of a television interview, but then was wasn’t able to speak.

Wallace was taken by ambulance to the infield care center, where to was sitting up as he was taken inside on a stretcher. He was treated and released a short time later, though no additional details were provided on what caused his problem.

Maybe it was the heat.

Maybe it was just the emotion of becoming the sport’s most outspoken voice since Floyd died while in the custody of Minneapolis police.

Phelps spoke to the drivers over their radio sets before they took the green flag.

“Our country is in pain and people are justifiably angry, demanding to be heard," Phelps said. "The black community and all people of color have suffered in our country, and it has taken far too long for us to hear their demands for change. Our sport must do better. Our country must do better.”

All 40 crews stood on the wall in front of their pit boxes. One of Wallace's crew member held up the T-shirt, which the driver removed before climbing into his car.

Floyd's death has sparked massive protests in all 50 states and around the world demanding an end to law enforcement brutality against people of color.

Harvick said he's ready to join the cause.

“There's things we can do to try to help our communities, help the conversation,” he said. “We need to change.”