As he rails on election, Trump largely mum on toll of virus 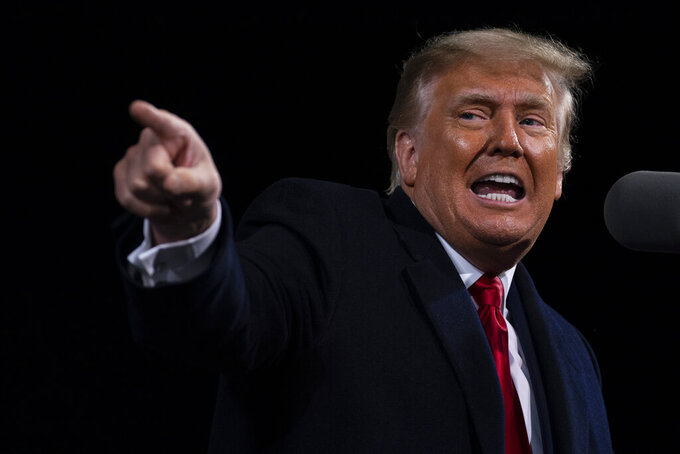 WASHINGTON (AP) — President Donald Trump has been highlighting lots of really big numbers this week: New highs for the stock market. The 100-plus House members backing a lawsuit challenging his election loss. The nearly 75 million people who voted for him.

All the while, he's looked past other staggering and more consequential figures: The record numbers of coronavirus deaths, hospitalizations and new cases among the citizens of the nation he leads.

But it was not a rallying cry to help shore up Americans sagging under the toll of a pandemic that on Wednesday alone killed more Americans than on D-Day or 9/11. It was part of a fundraising pitch tied to Senate races in Georgia and to Trump’s unsupported claims that Democrats are trying to “steal” the presidential election he lost.

Of Trump's tweets over the past week, 82 percent have been focused on the election and just 7 percent on the virus — almost all of those related to forthcoming vaccines — according to Factba.se, a data analytics company. Nearly a third of the president’s tweets on the election were flagged by Twitter for misinformation.

As he talks and tweets at length about the election he is futilely trying to subvert, the president is leaving Americans without a central figure to help them deal with their grief over loved-ones' deaths and the day-to-day danger of the pandemic that still rages. His strategy is to focus totally on the shiny object coming soon — the prospect of a vaccine.

Friday night, the the Food and Drug Administration gave the final go-ahead to a vaccine from Pfizer and its German partner BioNTech, launching emergency vaccinations in a bid to end the pandemic. But Trump's three-minute internet address hailing the vaccine made no mention of the toll the virus has taken.

Calvin Jillson, a presidential historian at Southern Methodist University, said Trump has proven himself unable or unwilling to muster the “normal and natural, falling-off-a-log simple presidential approach” that is called for in any moment of national grief or crisis.

“He simply doesn’t seem to have the emotional depth, the emotional reserves to feel what’s happening in the country and to respond to it in the way that any other president -- even those who’ve been fairly emotionally crippled -- would do,” Jillson said.

Trump did convene a summit this week to highlight his administration’s successful efforts to help hasten the development of coronavirus vaccines and prepare for their speedy distribution. And he spent part of Friday pressing federal authorities to authorize use of the first-up vaccine candidate from Pfizer.

At his summit, the president put heavy emphasis on the faster-than-expected development of the vaccines, calling it “an incredible success,” “a monumental national achievement,” “really amazing” and “somewhat of a miracle.” He's also claimed credit, though Pfizer developed its vaccine outside the administration's “Operation Warp Speed.”

In a passing nod to the pandemic's toll, Trump promised the coming vaccines would “quickly and dramatically reduce deaths and hospitalizations," adding that “we want to get back to normal.” But it will be months before most Americans have access to a vaccine.

Asked what message he had for Americans suffering great hardship as the holidays approach and the virus only gets worse, Trump's answer had an almost clinical tone.

“Yeah, well, CDC puts out their guidelines, and they're very important guidelines,” he said, “but I think this: I think that the vaccine was our goal.”

To focus otherwise would undercut Trump's goal of minimizing the national pain of the virus' toll and his claims that the danger will soon vanish.

Trump's successor, Joe Biden, on Friday answered that approach with a promise for greater presidential leadership. Of the virus, he said: “We can wish this away, but we need to face it.”

“It's not simply that he has decided not to express concern or sorrow, it's that he does not feel the sorrow,” Shesol said.

Ari Fleischer, who served as White House press secretary to President George W. Bush, said Trump has approached the virus in a "very mechanical, focus-on-the-vaccine kind of way” when people are also hungering for an emotional connection. That's hurt Trump politically, but it's true to his persona, Fleischer added.

“The president is a blunt force more than he’s an empathetic force,” Fleischer said. “To his credit, he doesn’t pretend. He is who he is. Most politicians would fake it."

The White House did not respond to a request for comment for this story.

It's not just Trump who is fazed by how best to acknowledge the toll of the virus.

The issue led to an unusually personal argument on the air Thursday at Fox News Channel, the favorite network for many of Trump’s supporters. Marie Harf, a commentator on the midday show “Outnumbered,” noted that 43 minutes into the show the previous day’s record-setting number of COVID deaths hadn’t been mentioned.

“We cannot lose sight of the tragedy that is unfolding every day in this country, in large part because people want to go about like normal and they don’t want to wear masks,” she said.

The show’s host, Harris Faulkner, called Harf’s remark offensive. “Keep your judgment someplace where you know you can fact-check it, because you can’t see my heart.”

Late-night TV hosts, too, took note of the scant acknowledgement of the unfolding tragedy.

In a lengthy monologue Thursday night, NBC “Late Night” host Seth Meyers faulted Trump and Republicans for continuing to focus on trying to overturn the long-settled election “as thousands of Americans die every day from a pandemic they clearly don’t care about."