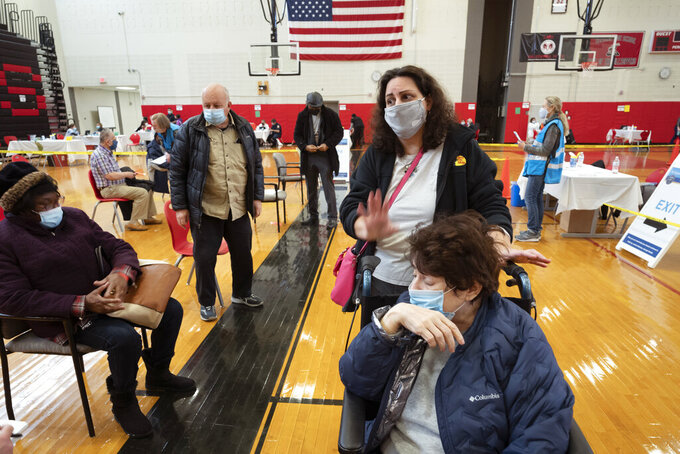 Susan Basciano stands behind her mother Susan Palaia, Wednesday, Feb. 10, 2021, at Central High School in Bridgeport, Conn. Susan Palaia, her husband Larry, second from left, and their health care aide Lena Larrington, left, received the COVID-19 vaccination. The mass vaccination clinic is one of several ways Bridgeport officials are trying to fight the low vaccination rates many cities across the country are seeing compared with wealthier suburbs. (AP Photo/Mark Lennihan)

BRIDGEPORT, Conn. (AP) — Avid local TV news watcher Ramon Soto was eager to get inoculated against the coronavirus, but didn't know there was a large-scale vaccination clinic not far from his home in Connecticut's largest city until a friend called him this week.

And when he found out, the 65-year-old retired lighting company supervisor from Bridgeport had trouble making an appointment and faced skepticism in his own home. His wife is leery and wants to wait and see if the vaccine has any bad side effects on people, he said.

“It came out so quick that people are afraid,” Soto said Wednesday as he received his first vaccination shot at Central High School after walking in with no appointment.

The Sotos' experiences and concerns are illustrative of the challenges facing officials in Bridgeport and other urban areas around Connecticut and the country as they try to address a racial gap in COVID-19 vaccinations, with Black and Latino people lagging behind white people in receiving the shots.

While Connecticut state and local officials have announced a series of actions over the past week to address the gap, some political officials and community activists say not enough is being done to reach out to community members to tell them where they can get vaccinated and to educate them about the vaccine.

“I get calls from constituents complaining they can't get an appointment, where do they need to go, they have to wait,” said state Sen. Marilyn Moore, a Democrat whose district includes part of Bridgeport. “What I’m annoyed with is that you knew the vaccine was coming and a plan should be in place. You should not be developing a plan at this point.”

The Rev. D. Stanley Lord, president of the Greater Bridgeport NAACP, said Black churches are key to help spread the word about vaccinations in local communities. But he accused Bridgeport Mayor Joe Ganim's administration of not doing enough to work with local religious and Black leaders.

“The way to get people vaccinated is to involve the religious community,” Lord said. “We did testing at local churches. Have vaccination sites at local churches. Get the pastors to either call or text and tell them about where they can get vaccinations. There is a disconnect between the city government and the Black community.”

Bridgeport officials were surprised by Lord's comments, saying they have been in regular contact with local pastors and other community members. They also have distributed 8,000 to 10,000 flyers containing information on vaccination sites, vaccines and contact phone numbers and websites at numerous locations, including churches. Lord also took part in a public service announcement prepared by the city, they said.

That's in addition to other efforts like setting up a phone bank to take calls about vaccinations, visiting senior housing complexes and providing in-home vaccinations for homebound people, they said.

“If I felt the city was not doing all that it could, I would definitely have something to say about that,” said Carolyn Vermont, Ganim's community liaison and a past president of the Greater Bridgeport NAACP.

Bridgeport, like many cities with large minority populations, has a much lower vaccination rate of people 75 and older than wealthier and whiter suburbs. According to new state data released this week, about 32% of the 6,900 Bridgeport residents ages 75 and older have received vaccinations, up from 24% last week.

Compare that to nearby wealthier and whiter towns like Fairfield and Trumbull, which have vaccination rates of 58% and 55%, respectively, for older residents. Some towns in the state have rates above 90%.

Limited data released Wednesday by state health officials also suggests racial disparities. As of Feb. 3, nearly 2% of Connecticut residents age 75 years and older who received the vaccine were Black, 2.3% were Hispanic and nearly 60% were white. U.S. Census data shows the state's population is about 67% white, 11% Black and 17% Hispanic.

Ganim suggested part of the reason why the city’s vaccination rate is low is the sheer number of people who live there — about 144,000 — and limited supplies of the vaccine.

“We have the most people. We’re the highest populated concentration of individuals anywhere in the state,” Ganim said while visiting the Central High School clinic Wednesday. “We’re working ... to make sure that we get a higher percentage every day who are able to get the vaccine here in Bridgeport.”

Local and state health officials also say they're using public education campaigns to battle myths and skepticism about the vaccines within the African American and Hispanic communities, which stem from a longstanding mistrust of medical systems.

Phillip Brown, 78, got his first vaccination shot Wednesday at the Central High School clinic. He said most people in his neighborhood want the vaccine.

“We got to do what we got to do. We want to be safe as much as we can,” said Brown, a retired carpenter. "Some people are just not going to do it period. They don’t know. I have a buddy I talk to who said, ‘Oh, you know, I’m not going to take the COVID shot. There’s COVID in there.’ I said, ‘Man, you don’t know about that.’”

The vaccines do not have live virus in them.

Similar efforts to get people in so-called “vulnerable” communities vaccinated, including mobile units, are being made by the state and health care organizations — including Hartford HealthCare and Yale New Haven Health — that are administering the vaccines.

Josh Geballe, Democratic Gov. Ned Lamont’s chief operating officer, said state officials learned a lot about ways to reach out to those communities during the early days of COVID-19 testing.

“We’re partnering with many of the exact same people that we worked with to scale up our very successful testing program now on vaccines,” he said.

Also, Lamont said the state is working with Black churches to help get the word out about vaccinations, like it did with spreading the word about COVID testing.

“You know, a few months ago, we would bring the testing van there. Now we’re bringing the vaccination van,” the governor said. “Maybe the minister gives people a heads up at the end of the service. It’s safe and effective to do it for your community.”