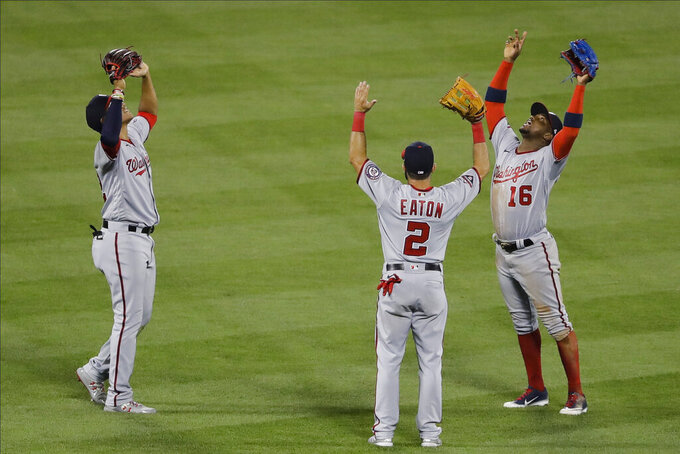 NEW YORK (AP) — Max Scherzer was grinding on the mound and grunting with each pitch, forced to work particularly hard just to get through the first two innings.

But he also looked healthy all the while — a wonderful sign for the Washington Nationals.

“There were some big spots where the game really could have changed course there," Scherzer said. "I was able just to get some big strikeouts.”

Howie Kendrick had three hits and Victor Robles blooped an RBI single for the World Series champions, who took the first two in a four-game series between NL East rivals.

“It's been frustrating. We've lost a lot of close games,” Mets starter Rick Porcello said. “We just need something to get over the hump.”

Porcello (1-2) threw six solid innings but was outpitched by Scherzer (1-1) in a matchup of Cy Young Award winners and former Detroit teammates. When they opposed each other in Washington last week, Porcello won 3-1 and Scherzer exited after only one inning because of a sore hamstring that first popped up before his previous outing.

The right-hander was confident it wasn't serious, and the Nationals said he felt good after a bullpen session between starts.

“I knew the hamstring wasn’t going to be an issue,” Scherzer said.

Grunting audibly while firing 95-96 mph fastballs to Wilson Ramos with the bases loaded, Scherzer needed a whopping 60 pitches to get through the initial two innings.

He stranded five runners early by striking out Ramos to end the first and Jeff McNeil to close the second.

“Was just getting back in the swing of things after really not pushing for 13 days there," Scherzer said. “And you know, I give them credit. They had great ABs early in the game. They were able to grind me, and just a ton of foul balls."

Things turned for the three-time Cy Young Award winner when Dominic Smith lined into a double play to end the third. Scherzer lasted six innings and threw only 45 pitches over his final four to finish with 105. He gave up six hits, struck out seven and walked two.

“We were watching him. His mechanics were good, his location was a little off, but he felt good,” Nationals manager Dave Martinez said. "We talked to him during the game and he said he felt fine. That last inning, he came in and said, `I still got a lot in the tank.'

“He started settling down, he started mixing his pitches up better. But he started getting the ball down in the strike zone and getting some swings and misses. He started throwing breaking pitches, which was nice.”

Tanner Rainey tossed 1 2/3 hitless innings, getting McNeil to ground into an inning-ending double play with two on in the seventh.

Daniel Hudson struck out two in a 1-2-3 ninth for his third save, helped by an outstanding play from Turner at shortstop.

Turner, who just announced with his wife that they're expecting a baby boy in February, drove Porcello's second pitch to right for an opposite-field shot that marked his second home run in two nights at Citi Field.

Impressive 21-year-old rookie Andrés Giménez tripled off the right-field wall against Scherzer in the fourth and scored on Luis Guillorme's sacrifice fly.

The speedy Turner grounded into two double plays for the first time in his career, both turned by Guillorme and Giménez.

“They were lightning fast,” Porcello said.

Giménez also made two other excellent plays at shortstop, including a sprawling stop on his backhand followed by a one-hop throw to first.

Mets: RHP Brad Brach and RHP Walker Lockett (lower back discomfort) were reinstated from the injured list, adding fresh arms to a taxed bullpen. The return of Brach, who tested positive for COVID-19 upon arriving at summer camp, gave New York its full complement of projected relievers for the first time this season. RHP Paul Sewald and C Ali Sánchez were optioned to the alternate training site in Brooklyn. ... SS Amed Rosario sat out with a stomach bug. He was expected to be available off the bench. ... Slumping 1B Pete Alonso was rested for the first time this season. He flied out as a pinch-hitter in the seventh and stayed in the game. ... 2B Robinson Canó (left adductor strain) did some baserunning at Citi Field but it's too early to tell if he'll be ready to come off the IL when eligible Friday, Rojas said.

Aníbal Sánchez (0-2, 7.84 ERA) pitches Wednesday night for Washington. The Mets hadn't announced a starter to replace Michael Wacha, who went on the injured list Sunday with shoulder inflammation. Lockett could be a candidate.