Heavyweight champ Joshua back in ring and has plenty to lose 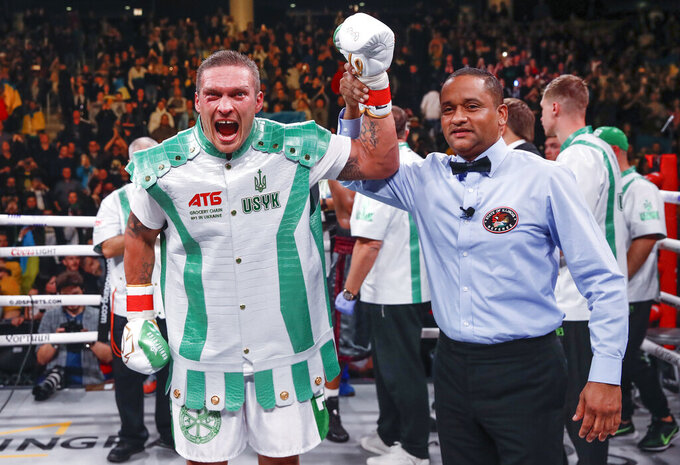 Anthony Joshua’s seemingly inexorable journey to being undisputed heavyweight champion of the world has gotten a little bumpy over the last two years.

First there was the loss to Andy Ruiz Jr. that no one saw coming at Madison Square Garden in June 2019, least of all Joshua after 22 straight wins to open his professional career.

Then came a pandemic that has limited Joshua — at his physical prime in his early 30s — to one fight since the start of 2020.

And, most recently, there was the legal ruling which scuppered the proposed Aug. 14 fight against Tyson Fury in Saudi Arabia that would have given one of the Britons every belt in boxing’s marquee division.

That legacy-defining fight against Fury is still on the table — and with it a payday of as much as $100 million each — but it's endangered by an opponent Joshua must dispatch in the meantime to retain his WBA, IBF and WBO belts.

Oleksandr Usyk is the WBO mandatory challenger who arrived in London with an unbeaten professional record, a supreme technique and an eccentric personality ahead of Saturday’s fight that's being televised by the DAZN streaming service and will be watched by 60,000 fans at Tottenham Hotspur Stadium.

A unified world cruiserweight champion-turned-heavyweight, Usyk is only the second southpaw Joshua has faced in eight years as a professional and comes armed with advice from compatriot Wladimir Klitschko — the last Ukrainian to hold a world heavyweight title before his loss to Joshua in 2017, also in London.

As far as replacement fights go, this has to be up there with the most treacherous -- even if Usyk has only fought twice at heavyweight.

“He is good — let's give credit where it's due,” Joshua said on a video call this week. “In boxing, we all have big egos and we try to suppress people. Let’s lift him up. ... His accolades would say he's one of the best fighters I've fought in my career.”

Their paths to boxing’s highest stage are eerily similar.

Both won gold medals within a day of each other at the London Olympics in 2012 — Joshua at super-heavyweight, Usyk at heavyweight.

Both turned professional in 2013.

Both became world champion for the first time in 2016, though Usyk was in the cruiserweight division that he went on to unify inside two years.

His step up to heavyweight has been underwhelming mainly because of the pandemic that has limited him to two under-the-radar fights — Chazz Witherspoon retired in the seventh round of a fight in Chicago in October 2019 and British slugger Derek Chisora was beaten on points a year later — but Usyk is a superstar in Ukraine and renowned for his footwork, movement and reflexes.

It’s his punching power, now he is with boxing's big men, that raises the biggest concerns. He is giving up height (7.6 centimeters), reach (10.2 centimeters) and most likely size to Joshua.

“Everybody talks about who is bigger, who is smaller,” Usyk said. “But nothing bothers me.”

Certainly Joshua has more to lose heading into his latest big-stadium fight, especially if his head isn’t in the right space after the scrapping of the Fury fight. He insists it is but the last time his plans were interrupted by a change of an opponent, he lost to Ruiz Jr. — a replacement for Jarrell Miller — in his only fight so far in the United States and the only defeat on his professional resume.

Joshua rediscovered the thrill of a brutal knockout when he floored Kubrat Pulev in December to secure a ninth-round win in the first defense of his second spell as champion, but he likes to see himself as more of a thinker in the ring these days. That ring craft will be vital against Usyk, and Joshua has slimmed down for the fight, most likely to match his opponent’s speed.

Fighting a southpaw has given him an added motivation and challenge. And that's something Joshua says he needs at this stage of his career.

“I've gone back to learning about your foot positioning, your hand positioning,” he said. “I have my notepad about what I've learnt each session. I go back, read it, study it. I want to improve.”

Being denied a Fury-Joshua unification fight would be a shame for those boxing fans, especially in Britain, who have been hyping it as one of the most anticipated bouts of this generation. Fury, of course, still has to meet his side of the bargain by beating Deontay Wilder next month in the third fight of their trilogy.

As for Usyk, he is looking to emulate Evander Holyfield and David Haye in being an ex-cruiserweight champ with a world heavyweight title. It’d most likely be a win on points if that is to happen.

“Anthony, how are you? I’m coming for you, Anthony,” Usyk said in a spooky voice and broken English after his win over Chisora.

He has his shot, though Joshua feels it might be too big a leap.