Higuain latest player injured as Serie A prepares to resume 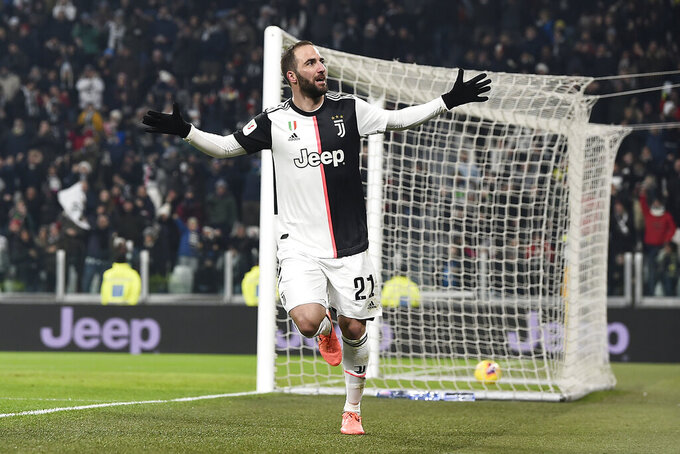 Juventus' Gonzalo Higuain celebrates after scoring during the Italian Cup soccer match between Juventus and Udinese, at the Allianz Stadium in Turin, Italy, Wednesday, Jan. 15, 2020. (Fabio Ferrari/LaPress via AP)

TURIN, Italy (AP) — Juventus forward Gonzalo Higuain became the latest player to get injured as Serie A prepares to return later this month.

Higuain pulled up in training on Thursday and Juventus announced in a short statement that the Argentina forward had injured his thigh.

“During today’s training session, Gonzalo Higuain suffered a muscle strain on the posterior region of his right thigh,” the club said. “The tests performed at JMedical have ruled out any lesions. His condition will be monitored in the coming days.”

Italy’s top soccer league is scheduled to resume on June 20 but Juventus will be involved in the Italian Cup the week before, with the second leg of its semifinal against AC Milan before a potential final in Rome on June 17.

Serie A has been suspended since March 9, when the government ordered a nationwide lockdown because of the coronavirus pandemic.

A number of players have been injured since they returned to training at the beginning of May after two months of limited activity, including Milan forward Zlatan Ibrahimović and Lazio midfielder Sergej Milinković-Savić.

Ibrahimović injured his calf in training last month and went back to Sweden to recover before returning to Milan this week and undergoing further tests on Thursday.

“His recovery is proceeding well, without complications and a new check-up is to be expected in about 10 days,” Milan said.

With the Serie A season to be completed in a 43-day span, teams will have matches approximately every three days and there are concerns of an increased number of injuries.

“The risk is very high for an athlete who in the middle of the season is stopped for 70 days and then restarts with an incredible effort, especially with high temperatures,” Lecce coach Fabio Liverani said. “There is a lot of care and planning from the staff but luck will also play a big part.”

Juventus, which is bidding for a record-extending ninth straight title, has a one-point advantage over Lazio. Third-place Inter is nine points behind the leaders with a game in hand.

Juventus is also involved in the Champions League. If it goes all the way in both cup competitions it could play 20 matches in 78 days.