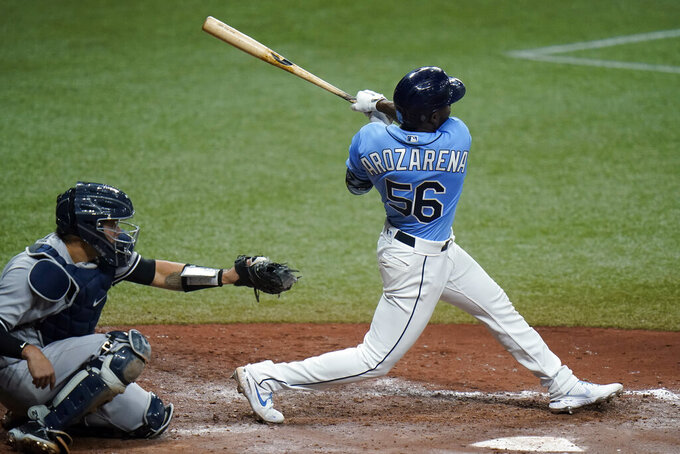 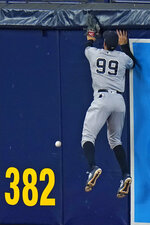 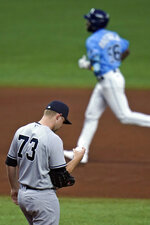 ST. PETERSBURG, Fla. (AP) — Rich Hill joined Cy Young and Nolan Ryan as the only pitchers to strike out nine against the Yankees at age 41 or older, and the Tampa Bay Rays beat coronavirus-impacted New York 9-0 Thursday night to avoid getting swept in a three-game series.

Hill held down the Yankees by changing speeds, with fastballs from 87-91 mph, sinkers and cutters from 83-87 mph and breaking balls from 67-75 mph.

“I'm throwing the ball well,” Hill said. “I have been the last month. So, I think that's something to just continue to put in the work starting tomorrow again.”

“He was outstanding.” Rays manager Kevin Cash said. “We’ve talked about the last three outings, and now four that he’s been on a really good run. He’s had good rhythm, you see him change his delivery a little bit at times. He’s got a good feel for what he’s doing.”

New York announced before the game that shortstop Gleyber Torres tested positive for COVID-19 despite being fully vaccinated and having previously contracted the coronavirus during the offseason.

Taillon (1-3) gave up four runs and six hits in 4 2/3 innings, raising his ERA to 5.40. He struck out nine and walked two. He was hurt when Díaz singled on a first-pitch hanging curve and Meadows homered on a changeup.

New York, which got a run-scoring double-play grounder from Clint Frazier in the ninth inning, scored five runs in the series but still managed two wins behind the strong starts of Jordan Montgomery and Gerrit Cole.

“Thankfully we had great pitching,” LeMahieu said. “We didn't swing it great. We swung it just enough to win the series.”

The Rays scored one run in the first two games.

Arozarena was homerless with two RBIs in his previous 16 games,. Arozarena has four homers this season after hitting 10 homers in 20 playoff games last year for the AL champion Rays.

Meadows added a two-run double in the eighth. New York finished with five hits, including two in the ninth off Hunter Strickland.

Rays ace Tyler Glasnow was a teammate in Pittsburgh with Cole (5-1, 1.37 ERA), who has struck out 78 and walked just three in his eight starts this season.

“It’s crazy,” Glasnow said. “He’s got a good work ethic, always trying to get better. He’s just a student of the game and very curious. He’s just like each year he’s always such a competitor, he just gets better, better, better. It’s a really good run.”

Yankees: CF Aaron Hicks was out of the lineup with a sore left wrist and will have an MRI. His status for Friday has not been determined… INF Gio Urshela, who moved from third to shortstop with Torres out, might get rested Friday night. He has bothered recently by knee soreness. ... 1B Luke Voit had a planned day off after playing in his first two games of the season following surgery to repair a meniscus tear in his left knee. … RHP Luis Severino threw batting practice for the first time since Tommy John surgery on Feb. 27 last year.

Rays: Closer Diego Castillo (right groin strain) remains on target to be reinstated from the 10-day injured list on Friday. … 1B Ji-Man Choi (arthroscopic right knee surgery) us sore, delaying his return after rejoining the team Tuesday from a rehab assignment at Triple-A Durham.

Yankees: RHP Corey Kluber I2-2) will start at Baltmore on Friday night against RHP Dean Kremer (0-3).