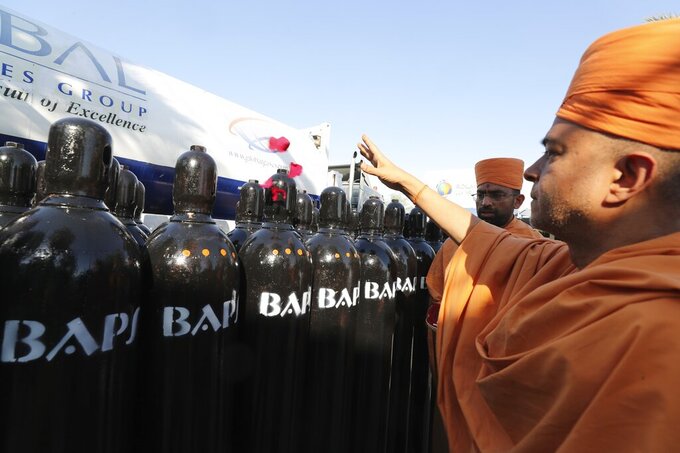 DUBAI, United Arab Emirates (AP) — As India's government scrambles for supplies of oxygen and other emergency aid to control the raging coronavirus outbreak, donors around the world have come to the rescue — including a Hindu temple in the United Arab Emirates.

On Monday, volunteers from the country's Hindu community gathered at the Jebel Ali Port, here at the northern end of Dubai, to haul hundreds of cylinders of liquid oxygen and massive containers of compressed oxygen onto a ship, where it will head to crisis-wracked India. The organizers, Indian owners of a Dubai helium factory, shifted production to oxygen when the latest surge in virus cases hit India.

As calls for help back home grew, the factory enlisted the help of the main Hindu temple based in the UAE's capital of Abu Dhabi, BAPS Shri Swaminarayan Mandir, to send oxygen supplies. COVID-19 patients are suffocating in India's capital, New Delhi, and other cities because of the shortage.

Hindu spiritual leaders, dressed in saffron robes, came to bless the oxygen before sending it out, showering rose petals on the shipment and marking the cylinders with traditional orange dye.

The UAE’s economy is powered by millions of foreign workers from Southeast Asia. Indian citizens make up nearly 30% of the population.