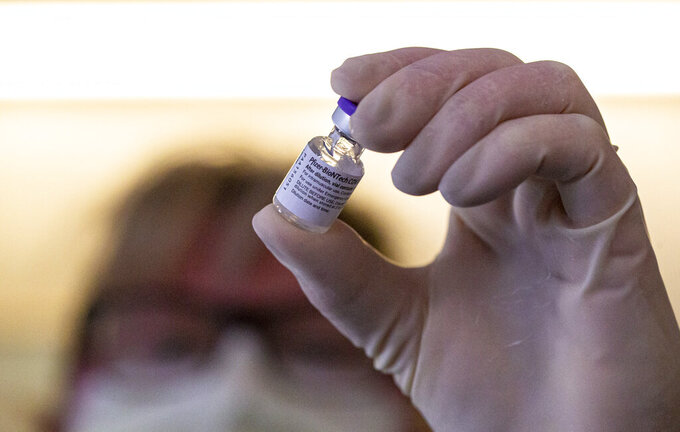 Pharmacy technician Suzanne Eagan shakes a vial of the Pfizer-BioNTech COVID-19 vaccine before drawing a dose for a healthcare worker at the University of Iowa Hospitals and Clinics, Monday, Dec. 14, 2020, in Iowa City, Iowa. (Andy Abeyta/The Gazette via AP)

IOWA CITY, Iowa (AP) — A small group of health care workers became the first people in Iowa to get the coronavirus vaccine Monday, kicking off a months-long campaign to deliver shots throughout the state.

The arrival of the vaccine marked a milestone in the fight against a virus that has killed roughly one out of every 964 people in Iowa, infected hundreds of thousands more, filled up hospitals and closed many public school buildings.

University of Iowa Hospitals and Clinics said on Monday morning that it received 1,000 doses of the vaccine manufactured by Pfizer and its German partner BioNTech. The hospital soon started vaccinating employees, saying it anticipated about 100 would receive the first of two doses of the vaccine on Monday.

The first to get a shot in the arm was emergency nurse David Conway, who said it felt “excellent.”

“It was fast, it was painless, and it's the right thing to do,” Conway said in a video released by the hospital.

The first group getting the vaccine includes front-line doctors and staff in units that have cared for COVID-19 patients since the pandemic began, as well as “several essential leaders” guiding the institution’s response.

“This is an historic moment to change the course of the pandemic and we are proud of our role as leaders in this process,” said hospital CEO Suresh Gunasekaran, who was among those vaccinated and who said he felt good.

He said 1,000 hospital workers would be vaccinated by the end of the week, and expressed hope that the vaccine's arrival signaled the pandemic would be over in six to nine months.

The hospital had been one of many sites nationwide that ran clinical trials on the Pfizer vaccine, which researchers say found it highly effective at combating the virus in adults. The Food and Drug Administration late Friday granted an emergency use authorization for the vaccine.

If the FDA authorizes a vaccine manufactured by Moderna, as it is expected to do soon, Iowa expects to receive 172,000 doses in total over the next three weeks.

MercyOne Des Moines said it expected to receive its first shipment of the vaccine on Tuesday.

Iowa announced earlier this month that the first doses would go to health care workers at six sites and to nursing home residents. The latter population is expected to receive the first vaccines during the week of Dec. 28 under a national program in which pharmacies will administer them on site.

An advisory committee will help the Iowa Department of Public Health determine which populations should receive priority for the vaccine in the coming weeks and months, when it will still be in short supply.

The state’s vaccine plan anticipates that other elderly residents and essential workers in law enforcement, emergency response, food-related industries, education and child care may be among the next in line, along with adults with high-risk medical conditions.

The state anticipates that the vaccine will be available to anyone who wants one by mid-2021.

The vaccine arrived as the state on Monday reported 60 more COVID-19 deaths, bringing its pandemic death toll to 3,273.

After a reporting change retroactively added hundreds of deaths to the state's total last week, Iowa now has the 15th highest per capita death rate among states, according to researchers at Johns Hopkins University.