Holstein Kiel to have 2,500 fans in Bundesliga promotion bid 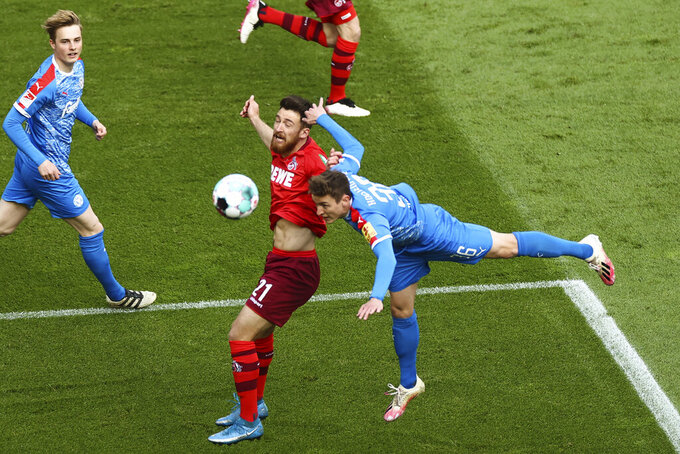 Cologne's Salih Ozcan, center, in a header duel with Kiel's Niklas Hauptmann during the Bundesliga relegation soccer match between FC Cologne and Holstein Kiel at the Rhein-Energie-Stadion in Cologne, Germany, Wednesday, May 25, 2021. (Rolf Vennenbernd/Pool photo via AP)

KIEL, Germany (AP) — Holstein Kiel backtracked Thursday on an earlier decision against fans and will have up to 2,500 supporters present for its Bundesliga promotion playoff against Cologne on Saturday.

The second-division club said it had permission from local authorities to have the fans present for the second leg of the playoff.

Kiel, which finished third in the second division, won 1-0 at Cologne in the first leg on Wednesday. Cologne finished third from last in the Bundesliga. The winner — which could be decided on the away goals rule — will play in Germany’s top division next season.

Kiel was allowed to have supporters for its last league game of the season against visiting Darmstadt last Sunday but refused.

“Professional soccer should not claim a special role for itself in society,” club president Steffen Schneekloth said at the time.

Some fans showed up anyway to cheer the team from outside as Kiel lost 3-2 and missed out on automatic promotion. About 1,500 people gathered outside the stadium, most without wearing masks or adhering to social distancing.

Schneekloth said Thursday that Sunday’s game had shown “that we have to rethink our basic stance with regard to the situation around the stadium" but “we are still of the opinion that professional soccer should not claim a special role in this matter.”

The seven-day incidence rate of new coronavirus infections in Kiel has dropped to about 30 per 100,000 inhabitants.