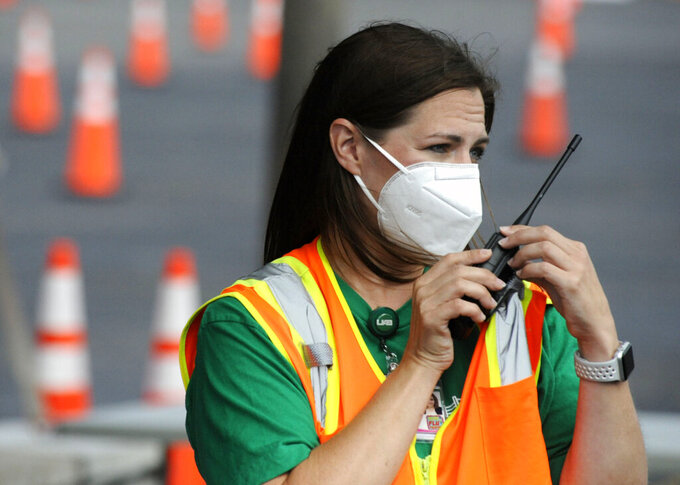 Cathy Fuller, a nurse at the University of Alabama at Birmingham, talks into a handheld radio on Tuesday, May 18, 2021, at a mass COVID-19 immunization site in Hoover, Ala., where declining demand prompted a shutdown. While initially capable of vaccinating as many as 2,400 people daily, site workers said far fewer people have been showing up for shots even though only about 25% of Alabama's population is fully vaccinated. (AP Photo/Jay Reeves)

HOOVER, Ala. (AP) — One of the largest COVID-19 vaccination sites in Alabama operated for a final day Tuesday as dwindling demand forced a shutdown despite the fact that only about 25% of the state’s population has been fully vaccinated against the illness caused by the coronavirus.

While the drive-up clinic at Hoover Metropolitan Stadium could immunize as many as 2,400 people a day when it was opened by the University of Alabama at Birmingham in early February, traffic has slowed to a relative trickle in recent weeks. Workers said they'd do well to vaccinate even 500 people on its last day in operation.

UAB still has three other large, public sites open in metro Birmingham and will begin operating smaller, short-term clinics. But workers said it was dispiriting that more people weren't showing up for shots in Hoover, one of Alabama's largest cities with 85,000 residents and part of a metro area of more than 1 million.

At the beginning of the vaccination campaign, cars filled the suburban baseball stadium's parking lot, which is covered with white tents and orange traffic cones arranged to form queues. The site, which has vaccinated nearly 70,000 people, is located near interstate highways and one of the busier commercial routes in the state, making access easy.

Lately, other than during morning and evening rushes and around lunchtime, workers sometimes sit idle waiting on patients to arrive. UAB nurse Cathy Fuller said the decline in demand is noticeable.

"We want the population to know that this vaccine is safe, that it’s needed and we all need to do our part," said Fuller, who supervised the site. “It's frustrating to be out here and have the vaccine available but not have the patients to put the shots in the arms.”

It's unclear what has led to the decline in demand, but health officials say the hesitancy among some to get the vaccine is a problem.

Gary Wright, who had COVID-19 in December and was vaccinated after a 90-day waiting period following the illness, brought his wife Amanda Wright for her second shot of the Pfizer vaccine since the site was close to their home. Gary Wright, who travels for work and is ready to quit wearing a mask, said he wasn't worried that more people aren't getting shots.

“I think probably we all should do it at some point, but I think everyone has a right if they choose not to. I've got some friends that don't want to do it, and I think that's their personal preference,” he said.

Vaccinations have lagged in predominantly white, rural counties in Alabama, while communities with predominantly Black areas are generally doing better. Overall, Alabama's vaccination rate is the second-lowest in the country and better only than Mississippi's rate.

Cases of COVID-19 are at their lowest point in Alabama since the beginning of the pandemic, mirroring a national trend, and hospitalizations for the illness are only about one-tenth of levels during the worst of the crisis in January. More than 540,000 people have tested positive for the illness statewide, and more than 11,00 have died.