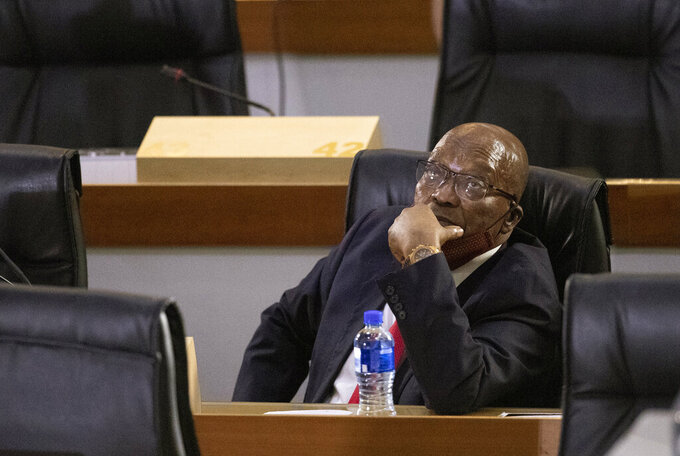 FILE — In this Tuesday, Nov. 17, 2020 file photo, former South African President, Jacob Zuma, appears at a hearing of the Zondo Commission of Enquiry into State Capture. A special unit in the country is now investigating nearly $900 million worth of possible corruption in the procurement of COVID-19 contracts at the same time that allegations of widespread government graft continues. (AP Photo/Themba Hadebe, file)

Public anger over suspect government contracts worth nearly $900 million for the purchase of supplies to fight COVID-19 may finally bring the South African government to take more decisive steps against corruption, say experts.

Africa's most developed economy is already deeply mired in corruption with a commission of inquiry hearing allegations of widespread graft during the tenure of former president Jacob Zuma. The new charges of the misuse of public money earmarked to fight the COVID-19 pandemic has the potential to be a turning point, say those experts.

In a report last month, the government's Special Investigative Unit outlined how the procurement of personal protective equipment for hospitals and clinics and other supplies in the early months of the pandemic last year was abused by local, provincial, and national officials.

As South Africa’s virus cases multiplied rapidly, making it Africa’s worst affected country, those officials were signing off on more than 2,500 emergency contracts that were identified for investigation for corruption and mismanagement. More allegations are still coming in, investigators say, and their probe is ongoing.

Some of the alleged corruption was grand and complex, involving front companies moving millions of dollars through a web of bank accounts.

Other schemes were shamelessly simple, like overcharging for blankets to be given to the poor as winter set in. One, a $670,000 order to buy motorcycles with sidecars to use as ambulances for COVID-19 patients, was just absurd.

There was “a complete breakdown of the checks and balances," the unit said.

Some cases have been forwarded to prosecutors for criminal proceedings. The investigative unit is looking into transactions involving more than 30% of all the money the South African government spent on fighting COVID-19 up to November, it said.

It would be shocking, corruption experts say, if graft hadn't already been deeply entrenched in South Africa.

“I get the outrage but not the surprise," said David Lewis, executive director of Corruption Watch in South Africa. “We’ve been grappling with large-scale procurement corruption forever.”

For nearly three years, the commission of inquiry into state corruption during the Zuma years has aired on a nearly daily basis grimy details of how heads of state-run enterprises, top law enforcement officials, Cabinet ministers and Zuma himself were allegedly on the payroll of corrupt businesses to allow them to cash in on huge government contracts. Zuma was president from 2009 until 2018 when he was forced out because of the widespread corruption allegations.

President Cyril Ramaphosa came to power vowing to root our corruption. But many officials of the ruling party, the African National Congress, continued with the graft and saw the pandemic as an opportunity. Ramaphosa is facing resistance from within the ANC — the party that Nelson Mandela once led — as Zuma has defied court orders to testify at the corruption hearing and the party's secretary-general has refused to step down while he faces criminal charges for corruption. Many see these as signs that despite Ramaphosa's good intentions, the party is unwilling to reform itself.

Despite a sense of exasperation from South Africans, William Gumede, founder of the Democracy Works think tank, strongly believes this is a turning point. He was part of an expert panel that wrote a report for the government urging strong action when the corruption amid the pandemic first emerged.

Gumede said this scandal “is so difficult for the ANC to wish away" because it was particularly “disgusting” during a health crisis, and it wasn't under Zuma's tainted administration. Zuma has gone, but corruption remains, he said.

Gumede also identified a change in the national sentiment since the coronavirus. The pandemic has driven South Africa, with 1.5 million cases and more than 50,000 deaths, to maybe its lowest point since the end of apartheid in 1994. South Africa was in recession even before the devastating effects of the virus. Unemployment has now risen past 30% and, in a dire warning for the future, youth unemployment is at nearly 60%.

“Now they have been impacted directly," Gumede said of South Africans, who often didn't see big-ticket corruption as something that affected them personally. “You’re sitting at home because your factory has just closed. You can’t turn your back on it anymore. That’s what has changed.”

But Gumede and Lewis agreed that it's not just about high-level graft. The corruption that more directly affects everyday South Africans festers at local levels.

Trust in the government is at an all-time low, according to Sekoetlane Phamodi, director in South Africa of Accountability Lab, a group operating in nine countries and pushing for more government accountability.

Phamodi and some young South African anti-corruption activists described what they see at grassroots levels: A school building that's crumbling because someone took a shortcut on the construction contract and pocketed extra money; an understaffed hospital that turns away the sick after money budgeted to employ doctors and nurses disappeared; unemployed people overlooked for precious jobs because they can't or won't pay bribes to local politicians.

“Theoretically times are changing," one of the young activists, Shepherd Siyanda Masondo, said. “In actual fact, they are not.”