Hospitalizations up again in Georgia as some schools reopen 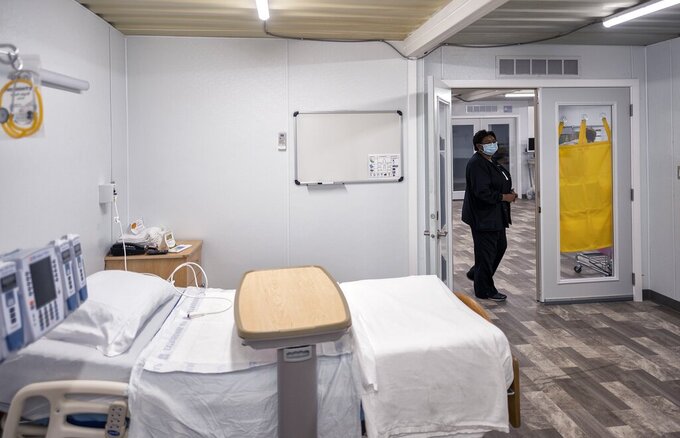 ATLANTA (AP) — The number of Georgians hospitalized with COVID-19 set another record Tuesday, while deaths and new confirmed cases of the respiratory illness remained at high levels.

Other schools keep putting off their start dates or announcing they will begin class online, with Burke County, Wayne County and Wilcox County among those announcing delays in recent days. Gainesville is the latest system to shift to all-virtual instruction to start the year.

Republican U.S Rep. Jody Hice announced he had gone into quarantine after contact with Texas Rep. Louie Gohmert and a second person. Hice said he had no symptoms and is feeling fine. Hice's Washington, D.C., staff also went into quarantine.

The number of confirmed coronavirus infections in Georgia pushed past 182,000, although experts say many cases are never confirmed. The seven-day rolling average of daily new cases in Georgia has risen from 3,420 new cases per day on July 15 to 3,671 on Thursday. The number has been at an apparent plateau for about the last week, but is not yet clearly going down.

The illness continues to spread rapidly in some counties, though. Charlton and Evans counties are among the top 30 counties nationwide for per-capita spread in the past two weeks according to data kept by The Associated Press. Cases are spreading rapidly along the Florida line and in eastern parts of the state from Augusta southward.

Georgia hospitals have been voicing concerns about bed space with the surge of cases. The 3,200 people in hospitals on Thursday is a record, and critical care beds statewide are 87% full. Two of the state's smaller hospital regions — one around Athens and one in east central Georgia that includes Vidalia and Dublin — each reported one critical care bed available on Wednesday.

Although symptoms of COVID-19 are often mild and most people recover, some worsen and die. Georgia's confirmed death toll rose to 3,671 Thursday, and the 14-day average of deaths rose to a record 41.

One hopeful sign is that the rate of people testing positive has fallen over the past two weeks, suggesting that increased testing capacity is beginning to show the true extent of the illness. However, Georgia still is among the top 10 states for positivity rates, remaining well above the 5% recommended by experts as a sign that a state is doing enough testing compared to the size of its outbreak.

“For a first day of the school year, you almost wouldn't know anything is wrong,” Hosmer said. The district south of Chattanooga delayed online learning for the 300-plus of its 2,600 students who chose that option, the superintendent said, because it hadn't had enough time to train staff. He said the district now aims to start online learning next week.

The district isn't requiring employees or students to wear masks, but Hosmer said “we had pretty good participation” in mask wearing, which is being strongly encouraged by the county. He said he would also advise his principals to work more on social distancing to keep students apart.

In Mitchell County, officials held contests to encourage as many students to return as possible.

“There is no place like being in school in-person," Superintendent Robert Adams said in a video last week. "I think we're going to struggle with the at-home thing. But if that works for you right now, nothing wrong with it, we're OK with it, and we'll support you.”

The district is offering workbooks or online lessons for students whose parents want to keep them home.