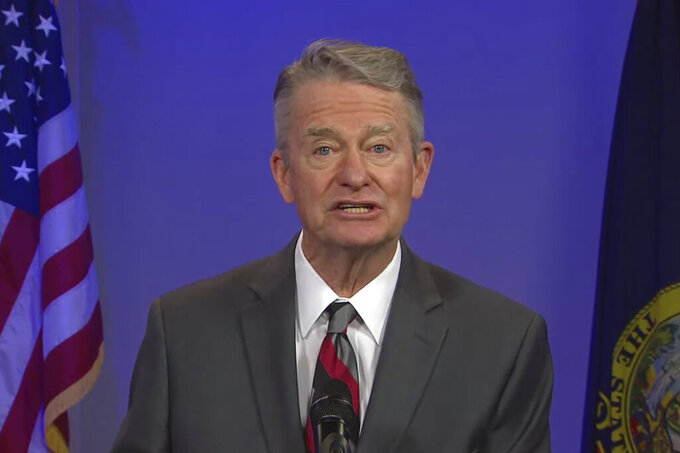 In this photo from video, provided by Idaho Public Television, Idaho Gov. Brad Little speaks about the COVID-19 emergency in Boise, Idaho, on Friday, Jan. 22, 2021. Gov. Little criticized state lawmakers for jeopardizing efforts to fight the coronavirus and called on residents to contact their senators and representatives. The Republican governor on Friday in an anger-tinged speech on live television says lawmakers are perpetuating false information and trying to score political points rather than help fight the pandemic. (Idaho Public Television via AP)

BOISE, Idaho (AP) — Legislation taking aim at limits on how many people can gather during the coronavirus pandemic cleared the Idaho House on Wednesday, but it doesn’t appear likely to have any force.

The House voted 55-15 to approve the measure triggered by lawmaker anger over restrictions on crowd sizes that the Idaho High School Activities Association set for the girls’ state basketball tournament this month.

The association has limited the event to 1,800 fans in the 11,000-capacity Ford Idaho Center in Nampa, saying it's intended to keep kids safe. Officials also said some schools wouldn’t send teams to participate if they felt kids were at risk because of the pandemic.

The legislation targets Republican Gov. Brad Little’s health order last week that raised the limits on gatherings from 10 to 50. The resolution says the 50-person limit is “declared null, void, and of no force and effect.”

However, the governor’s health order recommends, but doesn’t require, a 50-person limit, and there is no penalty for exceeding 50 people. Also, the Ford Idaho Center is owned by the city of Nampa, which has no size limits on crowds. Neither does Canyon County, where Nampa is located.

The Republican-led Legislature has introduced more than a dozen pieces of legislation aiming to end the governor’s power to approve ongoing pandemic restrictions. But many of those measures have been killed or stalled as it became apparent lawmakers had confused emergency orders with health orders and that ending Little’s emergency orders would cost the state millions in federal aid.

Republican Rep. Brent Crane said the crowd-size measure was intended to clear up what he said was confusion about the number of people who can gather at schools and other venues statewide.

“We're hopeful that this particular resolution provides some clarity and sends a very clear message to these superintendents that we would like to be able to use the facilities that taxpayers own, first of all,” Crane said. “Second of all, we'd like these facilities to be open as well.”

Republican Rep. Barbara Ehardt said she and co-sponsor Crane introduced the legislation to give people the opportunity to move about freely during the pandemic.

“This state is the kind of state that should set and pave the path forward, especially when it comes to such basic things as faith, family and freedom,” she said. “Our citizens have been waiting for us to do something, something to show them that we're moving forward.”

The measure is a concurrent resolution, requiring the approval of both the House and Senate but not the governor’s signature. It now goes to the Senate for consideration.

The Idaho attorney general’s office said in an opinion that such resolutions don’t have the force of law.

Meanwhile, the state Department of Health and Welfare reported that about 166,000 residents have been infected with the virus and nearly 1,800 have died since the pandemic began.

State officials also say about 155,000 residents have received the first shot of the two-shot coronavirus vaccine and that about 40,000 have received both shots.