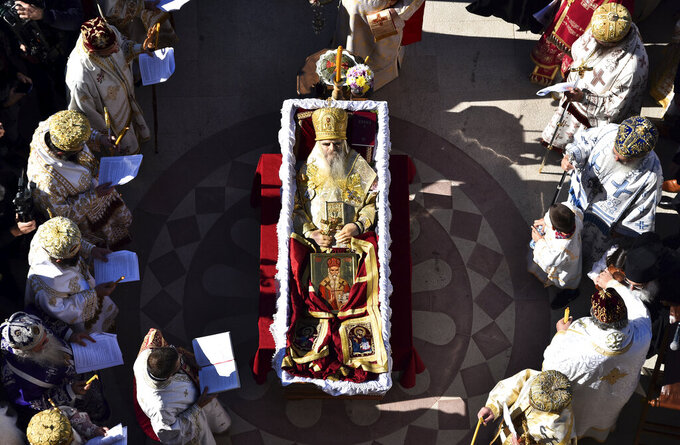 Thousands gathered by an open casket with Bishop Amfilohije's body during the liturgy and and funeral outside the main temple in the capital Podgorica, Montenegro, Sunday, Nov. 1, 2020. Bishop Amfilohije died on Friday after contracting the coronavirus weeks ago. A mass funeral on Sunday was held for the popular head of the Serbian Orthodox Church in Montenegro in violation of restrictions that are in place against the new coronavirus. (AP Photo/Risto Bozovic)

PODGORICA, Montenegro (AP) — Huge crowds on Sunday attended the funeral for the head of the Serbian Orthodox Church in Montenegro in violation of coronavirus-fighting restrictions.

Thousands gathered outside the main temple in the capital, Podgorica, for the liturgy and the burial of Bishop Amfilohije inside the church crypt. Authorities said the bishop died Friday after contracting the virus weeks ago.

The head of the Serbian Orthodox Church, Patriarch Irinej, led the prayers inside the packed church joined by dozens of officials and the clergy. Many of those inside the church did not wear protective face masks or keep social distance from each other.

Montenegro recently has seen a surge in virus cases and authorities have been struggling to contain the spread.

Bishop Amfilohije was an important figure for pro-Serb Montenegrins who have opposed the country's 2006 independence from a union with Serbia. The bishop and the church led months of protests earlier this year against a new religion law, claiming the Montenegrin government wants to take away the church property, which it has denied.

The protests helped a pro-Serb movement win an August election over the country's long-ruling pro-Western party, which steered Montenegro into NATO in 2017, defying Russia.

In an illustration of the bishop's popularity, thousands have paid their respects since Saturday, passing by an open casket with his body. Many kissed the bishop's remains, prompting an appeal from doctors to close the coffin.

The Serbian Orthodox Church remains the main church in Montenegro, which has one-third of its population of 620,000 who declare themselves as Serbs.