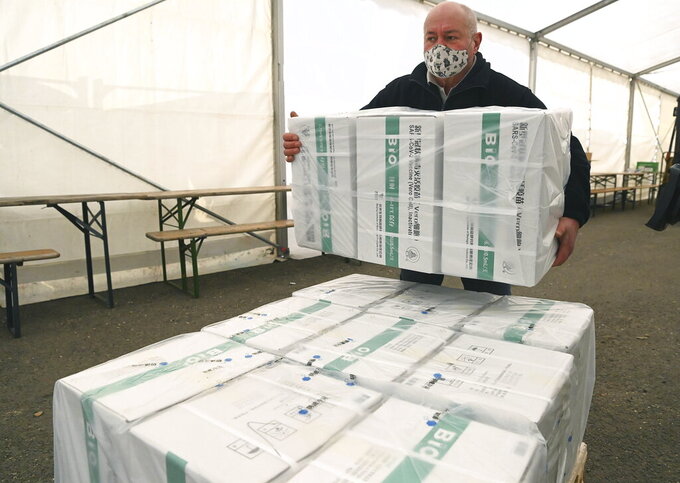 An employee unloads the newly arrived coronavirus vaccines from Chinese pharmaceutical company Sinopharm at the logistics base set up to in the parking lot of the government office in the 13th district of Budapest, Hungary, Monday, March 29, 2021. (Noemi Bruzak/MTI via AP)

Only Hungary's state media have been allowed inside COVID wards, and journalists have complained that a government order prohibiting medical staff from speaking to reporters has made it impossible to report on worsening conditions inside hospitals, creating a false picture of the situation's severity.

“Doctors and nurses are not permitted to speak publicly while members of the press are not allowed into hospitals, so we are unable to report on what happens there,” the letter reads.

The outlets — 28 in all - demanded that journalists be granted access to report on conditions in COVID-19 wards, and that medical staff, who are prohibited by ministerial decree from speaking to the media, be permitted to give interviews.

“Since people are cut off from this information ... many are still downplaying the dangers of the pandemic, and are not observing protective measures which is leading to more illness and thus an exacerbation of the pandemic," the letter reads.

Viktoria Serdult, a reporter for online outlet HVG, one of the letter's signatories, told The Associated Press that access to such information “is a basic right for all and can also play a role in saving lives.”

“It is not our job to create panic, but the lack of information can have serious consequences,” Serdult said.

A devastating surge in COVID-19 deaths and hospitalizations in Hungary has put its understaffed hospitals under unprecedented strain. As a proportion of the population, more COVID-19 patients are currently hospitalized in Hungary than in any of the European Union's other 26 countries except Bulgaria.

The surge showed no sign of abating Wednesday as the daily death toll set a new record at 302. Hungary continues to have the highest weekly death rate per capita in the world, according to Johns Hopkins University.

The outlets also asked to be included, either in person or digitally, in the virtual press briefings of Hungary's Emergency Task Force, which they say hand-picks questions sent in advance and offers no opportunity for clarification.

“For me it is baffling why they did not introduce a system that would make it possible for journalists to attend these events online,” Serdult said.

In a response to the letter, government spokesman Zoltan Kovacs wrote on Facebook that “we should cure (patients) in hospitals instead of using cameras,” and accused “left-wing portals” of spreading fake news and “discrediting the health care system.”

Even as pandemic indicators continue to worsen, Hungary has conducted one of the most successful vaccination campaigns in Europe. The number of vaccinated people broke the 2 million mark on Tuesday, representing more than 20% of the population.

Hungary has the highest per capita vaccination rate in the European Union, according to the European Centre for Disease Prevention and Control.