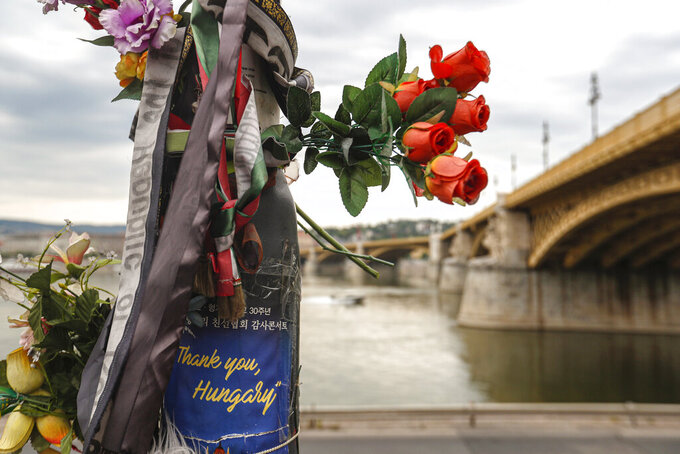 Flowers are placed near the Margit Bridge over the Danube river during a memorial ceremony for the victims, one year after the Mermaid boat accident, in Budapest, Hungary, Friday, May 29, 2020. Commemorations are taking place on the one year anniversary of the Danube River tragedy in which a sightseeing boat carrying mostly tourists from South Korea sank after a collision with a river cruise ship that killed at least 27 people. (AP Photo/Laszlo Balogh)

BUDAPEST, Hungary (AP) — Commemorations were held Friday in Hungary for the anniversary of an accident on the Danube River in which over two dozen South Korean tourists died after their tour boat collided with a river cruise ship.

In a ceremony organized by the operators of the Hableany, a wreath was lowered into the water from a boat near the site of the catastrophe, close to the Hungarian neo-Gothic parliament in Budapest.

Later, a memorial event with authorities from Hungary and South Korea took place on the banks of the Danube by the foot of the Margit Bride, where the Hableany was hit from behind and practically pushed underwater in a few seconds by the Viking Sigyn river cruise ship. The event began with a minute of silence.

Hungarian Foreign Minister Peter Sziijjarto said a memorial to those who died would be erected near the place of the accident once the relatives of the victims approved the design.

“We naturally hold the victims in our hearts and we will never forget the day of the tragedy,” Szijjarto said. “At the same time, I have to tell you that this horrible tragedy, this accident, has strengthened the friendship of the Hungarian and Korean nations.”

South Korea's ambassador to Hungary spoke about the grief of the victims' relatives.

"Although a year has passed, the shock and the wounds from that time are still within us," Ambassador Choe Kyoo-sik said. “The family members who since then live with the pain of not being able to get back their relatives who visited Hungary, are still in pain in Korea.”

The ambassador, the foreign minister and Budapest Mayor Gergely Karacsony all spoke also about the need to bring to justice anyone responsible for the catastrophe.

“It is even more painful and terrible in the tragedy of the Hableany, that it was caused by human offense,” Karacsony said. “There is no court decision that would bring back the innocent lives, there are no years in prison that would serve as comfort in this terrible situation.”

The cruise ship's captain is on trial in Budapest for his alleged responsibility in the crash, but court sessions have been postponed until at least September because of the coronavirus pandemic.

Karacsony also vowed to better regulate ship traffic on the Danube River in Budapest, which in normal times teems with tour boats, cruise ships and cargo vessels, and where numerous floating restaurants and hotels are docked.

One plan would include requiring large river cruise ships to dock outside downtown Budapest.

“Even if we can’t grasp the loss that the family members feel every day since the event, it is still important to declare that this should not have happened," Karacsony said. "The only thing that we politicians and leaders can do is to prevent all of this or something similar from happening again.”