Hungary first in European Union for vaccinations, and deaths 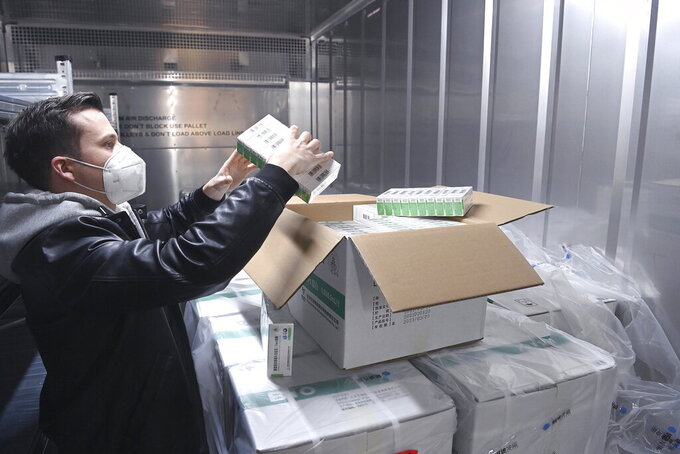 An employee checks the newly arrived coronavirus vaccines from Chinese pharmaceutical company Sinopharm at the logistics base set up to in the parking lot of the government office in the 13th district of Budapest, Hungary, Monday, March 29, 2021. (Noemi Bruzak/MTI via AP) 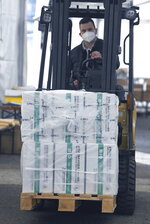 BUDAPEST, Hungary (AP) — Hungary has vaccinated more of its population than any other country in the European Union, according to figures from an EU agency, but it continues to be one of the world's worst in the number of COVID-19 deaths per capita.

The Central European country has given at least a first dose of a vaccine to 21.6% of its population, according to the European Centre for Disease Prevention and Control, just ahead of the small island nation of Malta and surpassing the 27-member bloc's average of 12.3%.

But Hungary's high vaccination rate, a product of a procurement strategy that secured doses from China and Russia in addition to those provided by the EU, has been unable to slow a surge in the pandemic that has given it the highest two-week mortality rate per capita in the world, according to Johns Hopkins University.

Viktor Orban, Hungary's prime minister, has been critical of the speed of the EU's vaccine rollout, and pushed for his country to break with the bloc and secure vaccine contracts with eastern countries. Hungary was the first in the EU to approve China’s Sinopharm and Russia’s Sputnik V vaccines, boosting supplies and making it an EU leader in the number of distributed doses per capita.

“We’re in a very good position, right at the head of the queue, and both the Russians and the Chinese are delivering in a timely manner,” Orban said in a radio interview on Friday.

Last week, Hungary issued emergency approval to two more vaccines — Convidecia, a jab produced by Chinese company CanSino Biologics, and Covishield, a version of the AstraZeneca vaccine produced in India — bringing the total number of approved jabs to seven, the most in the EU.

But while officials have emphasized that only rapid vaccine deployment can bring an end to the pandemic — Orban said on Friday that "vaccination is our primary, our only means of defense against the virus” — Hungary's good standing has been unable to alleviate a third wave that has led to record-breaking new cases and deaths.

As of Monday, more than 20,000 people had died of coronavirus-related causes in the country of fewer than 10 million inhabitants, giving it the third-worst death rate per capita in the world.

While other countries in the region have imposed tough lockdown measures to bring their own surges under control, Hungary on the weekend published plans to loosen pandemic restrictions in coming days despite the spiking numbers, an effort to restart the economy in a country which saw a 5.1% drop in GDP last year.

“I have no doubt whatsoever that in Hungary we’ll have a summer of freedom,” Orban said Friday.

According to the plans published Saturday in the government's official gazette, nonessential shops will be allowed to reopen with capacity limitations, and an overnight curfew in place since November will be shortened by two hours. The new measures will take effect once 2.5 million people have received a first dose of a vaccine, a government minister announced, which is likely to occur some time next week.