Immigrants with temporary status have grown deep roots in US 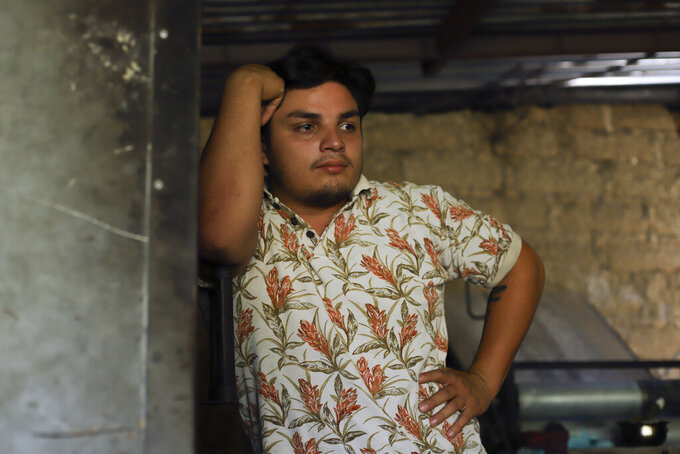 Elmer Peraza listens to his mother, Iris Franco, at her home in El Ranchador, Santa Ana, El Salvador, Friday, March 5, 2021. Franco runs a bakery at home and delivers the bread on a bike. The Salvadoran family lives humbly but is in a better place thanks to financial support from a family member in the United States who is part of the Temporary Protected Status program. (AP Photo/Salvador Melendez)

SPRINGDALE, Ark. (AP) — Irma Chavez is a married mother of four who leads a business networking initiative in this small Arkansas city she calls home. It’s a long way from her life as a live-in housekeeper in California years ago, and further still from a childhood working in El Salvador’s coffee fields.

What has indelibly marked the path of the 44-year-old marketing specialist is a government program that lets people from disaster-stricken and war-torn countries live and work legally in the United States. While the Trump administration tried to cancel the program for many immigrants, President Joe Biden is backing legislation that would give Chavez and hundreds of thousands of people like her a shot at becoming American citizens.

It’s a monumental shift from six months ago, when a court gave the Trump administration the right to halt Temporary Protected Status, or TPS, for four countries, stoking fear among many of the program’s 411,000 recipients that they could be sent back to their homelands.

Now, these immigrants are pinning their hopes on the Senate after the House passed a sweeping bill to let them call the United States their permanent home. The legislation, which faces uncertain prospects, would offer an eight-year pathway to citizenship to an estimated 11 million people in the U.S. illegally and put immigrants brought to the country as children and TPS recipients on an even faster track to becoming Americans.

For Chavez, who lives in Springdale, Arkansas, and has been renewing her temporary status for two decades, the legislation could put an end to fears of deportation. It also would let her travel more easily to see her mother and sister in their humble Salvadoran hometown.

“We really hope everything is going to change in our favor now,” Chavez said.

While temporary, the program can be renewed by U.S. officials and has been repeatedly. If supporters and critics agree on anything, it’s that a temporary program should not last decades.

Last fall, there were 10 countries designated for the program by the U.S. Homeland Security secretary. The Biden administration, which has eased some of Trump’s hardline immigration policies and is facing an uptick in migration, has recently added two more — Myanmar and Venezuela.

More than half of those with the status are from El Salvador, which was designated for the program after a 2001 earthquake. Many have lived in the U.S. for decades and have no plan of returning to a country that still sees thousands of people leave each year in search of economic stability and safety from gangs.

Giving these immigrants the ability to stay could drive many of them to buy homes and invest in businesses in U.S. communities still reeling from the coronavirus pandemic, said Manuel Orozco, director of the Center for Migration and Economic Stabilization at the development organization Creative Associates International.

“It’s almost like the logical thing to do because they are de facto Americans,” Orozco said. “It definitely will create better conditions for them not only to integrate but also strengthen their economic roots, improving the economy.”

On the outskirts of the Salvadoran city of Santa Ana, Chavez's sister Iris Franco runs an at-home bakery and delivers the bread on a bike. It’s how she supports herself and her four children, the oldest of whom is studying to be a doctor — the first in her family to attend college.

In 1994, the family reluctantly agreed Chavez would head north to stay with relatives in Los Angeles and work for three years. Initially, Chavez was a housekeeper and later worked the night shift at a gas station.

Chavez ended up staying because she got married and had children but kept sending money home. Once she had TPS, she got better jobs in stores and restaurants, moved to Oklahoma and later Arkansas, and eventually landed work in a chiropractor’s office.

Franco, 41, said the family lives humbly in El Salvador but better thanks to her sister’s assistance. Chavez sends money to help cover their mother's diabetes medication and helped Franco rebuild her home after flooding.

“It changed our life, because we knew that we had my sister in that place, and so in whatever she could, she has helped us,” Franco said.

Not that migration hasn’t come at a price. Franco remembers her sister crying when their mother was ill and she couldn’t be there and on the many Mother’s Days she missed.

The sisters finally saw each other four years ago when Chavez filed paperwork with the U.S. government to travel to El Salvador. After her trip, Chavez joined with Franco to start a nonprofit to give children in their Salvadoran neighborhood school supplies and a gift at Christmas.

In Arkansas, Chavez is raising two young sons with her husband — a Brazilian-born chef at a well-known restaurant — while leading a networking initiative she hopes will lead to Springdale’s first Latino chamber of commerce. Her oldest son will get married this year, and the next in line works as a delivery driver. Both are from a previous marriage.

Chavez said she's grateful for her temporary status, which the government extended pending the outcome of litigation over the Trump administration's push to end the program. But she has no guarantee of permanency in the United States.

TPS also doesn't solve her own immigration problems. Chavez's U.S. citizen husband has sponsored her for a green card, but she needs an old immigration court order cleared to apply.

The bill in Congress could change that, giving her assurance that she’ll never be separated from her children.

“If there were an amnesty or residency for all those on Temporary Protected Status, I’d automatically be in,” she said. “I’d always be protected from deportation. It would have a big impact.”