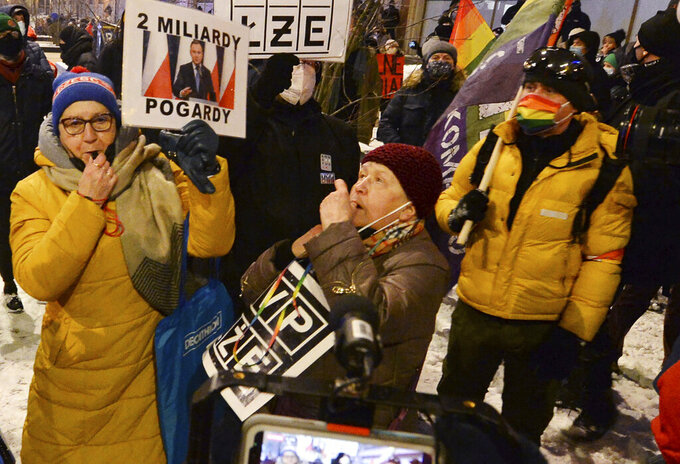 WARSAW, Poland (AP) — Independent media outlets in Poland suspended news coverage and other programming Wednesday to protest a planned new advertising tax that they view as an attempt by the country's right-wing government to undermine press freedoms.

The government says the “solidarity” tax would raise money to bolster state finances badly strained by the coronavirus pandemic. But 45 media companies signed a letter that said they already pay many taxes and that the advertising tax could push some to collapse.

“We strongly oppose the use of the epidemic as an excuse to introduce another new, exceptionally heavy burden on the media,” they wrote as websites and TV screens in Poland went dark for 24 hours.

Gazeta Wyborcza, the country’s leading newspaper and a liberal critic of the populist government, called the advertising tax “a powerful blow to free media.” In place of the usual news items on its webpage was a black screen and a warning that if the tax is passed, the publication's readers could one day lose access to independent news.

Broadcaster TVN, which is owned by the U.S. company Discovery Inc., also joined the protest. Viewers who turned to all-news station TVN24 and other channels only saw a black screen and the words “Your favorite programming was supposed to be here.”

The United States and the European Union stressed their support for media diversity on Wednesday.

The chargé d’affaires at the U.S. Embassy in Warsaw, Bix Aliu, called free media “a cornerstone of democracy,” and said “the United States will always defend media independence.”

In Brussels, a spokesman for the EU’s executive arm acknowledged the media protest, saying “We have seen the black screens.” Poland belongs to the 27-nation bloc.

“We expect member states to ensure that their fiscal or other policies will not affect the duty of ensuring a free, independent and diverse media ecosystem,” European Commission spokesman Christian Wigand said. “This is, of course, all the more important in times of the pandemic, which has hit the media sector hard.”

A German Foreign Ministry spokeswoman, Andrea Sasse, was asked about the matter at a news briefing. She said Berlin supports press freedom but did not want to comment on “internal political developments in Poland.”

Polish Prime Minister Mateusz Morawiecki cast the planned tax an effort to level out the playing field between small and big companies and to force technology giants like Google, Apple, Facebook and Amazon to contribute their fair share.

The tax is still being worked on in parliament, but Morawiecki's ruling conservative party, Law and Justice, has the majority needed to pass it.

“This is a fair step towards leveling the playing field for domestic players in various industries compared to big foreign players,” Morawiecki said.

Polish newspapers have experienced massive financial pressure in past years amid the digital revolution and faced new setbacks due to the pandemic.

Boguslaw Chrabota, editor of the daily newspaper Rzeczpospolita, wondered in an editorial if the tax is “systemic revenge” against the media for acting as a watchdog. Unlike many other outlets, Rzeczpospolita made some news coverage available Wednesday.

The tax proposal comes amid an erosion of media independence in Poland, which has been following a path taken by Hungary under autocratic Prime Minister Viktor Orban.

The EU has for years expressed concerns about what it views as an erosion of democracy in Poland and Hungary, two countries once admired as models of democratic transition from communism.

On Tuesday, a Hungarian court issued a ruling that will force one of Hungary’s last remaining independent radio stations, Klubradio, off the airwaves and limited to online broadcasts.

In December, a state-run company bought Polska Press, a formerly German-owned private media group that controls a wide swath of daily and weekly newspapers in Poland. Government critics called that a huge setback for media freedom.

Meanwhile, the Polish government generously funds public media, which act as a government mouthpiece, even increasing their budget by over $500 million ahead of a presidential election last year that the ruling party-backed incumbent ended up winning.

Associated Press writer Monika Scislowska in contributed to this report.