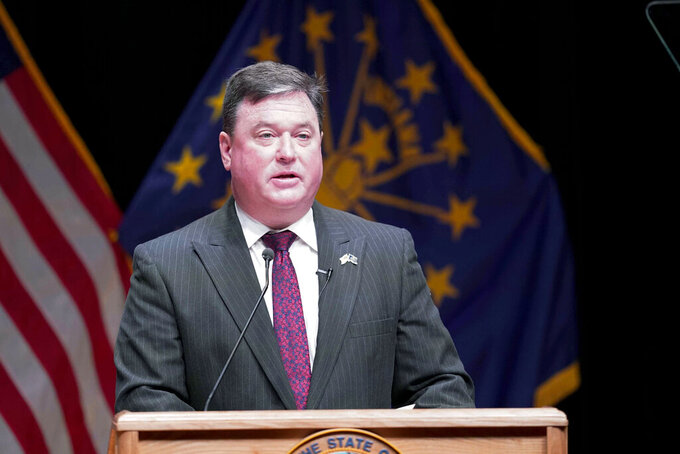 FILE - In this Jan. 11, 2021 file photo, Indiana's attorney general Todd Rokita speaks, in Indianapolis. Indiana's attorney general took aim Friday, May 1, 2021, at Gov. Eric Holcomb's attempt to block a new law giving state legislators more authority to intervene during public emergencies declared by the governor. A lawsuit filed by the Republican governor on Tuesday, April 27, 2001, challenged the law enacted over his veto two weeks ago giving legislative leaders the power to call the General Assembly into what it calls an "emergency session." (AP Photo/Darron Cummings, File)

INDIANAPOLIS (AP) — The state attorney general is attacking Indiana University’s decision to require proof of COVID-19 vaccinations from all students and employees as illegal under a new state law banning the state or local governments from issuing or requiring vaccine passports.

The opinion from Republican Attorney General Todd Rokita’s office, which is not binding, maintains that Indiana’s public universities are created by state law and that court rulings have determined them to be “arms of the state.” The opinion said the new law applies to universities since the legislature didn’t exempt them.

The attorney general’s opinion comes a day after 19 Republican legislators sent a protest letter to Gov. Eric Holcomb asking him to prohibit any state university from mandating vaccines that don’t have full U.S. Food and Drug Administration approval.

IU officials announced Friday that COVID-19 vaccinations will be required for the fall semester on all of its campuses.

The university said its order is aimed at prioritizing the safety of employees and the some 90,000 students on its seven campuses while providing a more typical college experience, with full attendance at in-person classes, athletic and other events.

“The policy mandating the vaccine reiterates that we are not requiring a vaccine ‘passport’; with everyone vaccinated, that would be unnecessary,” an IU statement said.

Republican legislators last month pushed through the ban on COVID-19 vaccine passports, a move that came as conservatives across the country portray them as a heavy-handed intrusion into personal freedom and private health choices.

Rokita emphasized that objection in a statement about the opinion.

“Indiana University’s policy clearly runs afoul of state law — and the fundamental liberties and freedoms this legislation was designed to protect,” Rokita said.

The new law states that “the state or a local unit may not issue or require an immunization passport.”

It makes no mentions of educational institutions and Senate President Pro Tem Rodric Bray said on the day it was approved that he didn’t believe it applied to public universities or K-12 schools.

“I looked at it as state, county, local governments,” Bray said.

“I appreciate and agree with the attorney general’s opinion on this topic, and I hope Indiana University reverses course and supports the rights of students, faculty and staff to choose whether or not they receive the vaccine," Huston said in a statement. "In addition, I believe IU should implement a more broad exemption process as provided with other immunizations.”

The attorney general’s opinion, however, said the state universities may require COVID-19 vaccinations but can’t force students or employees to provide proof of immunizations.

It distinguished between Indiana University’s policy and that of Purdue University, which plans to require students and employees to either provide proof of vaccination for the fall semester or participate in frequent COVID-19 testing.

“Students have the choice whether to vaccinate or be tested regularly; even if they are vaccinated, they can be tested if they do not want to show proof of vaccination,” the opinion said. “Purdue seems to be using a procedural loophole by not technically requiring the vaccinated student to produce the immunization record.”