Indians' Bieber slowed by COVID-19, not yet at training camp 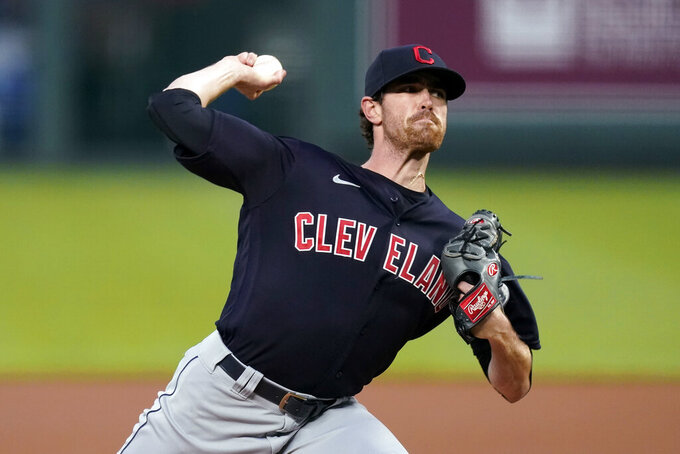 FILE - In this Aug. 31, 2020, file photo, Cleveland Indians starting pitcher Shane Bieber throws during the first inning of the team's baseball game against the Kansas City Royals in Kansas City, Mo. Indians ace Shane Bieber recently tested positive with COVID-19, delaying the AL Cy Young winner's arrival at training camp. President of baseball operations Chris Antonetti said Thursday, Feb. 18, 2021, that Bieber has only dealt with “very mild symptoms” from the virus. Antonetti anticipates that Bieber, who had been working out at the team's training complex in Goodyear, Arizona, will join the club in the next few days.(AP Photo/Charlie Riedel, File)

CLEVELAND (AP) — The Indians pitchers reported to training camp without their ace.

Shane Bieber, who dominated hitters last season while winning the AL Cy Young Award, recently tested positive with COVID-19 and has not yet reported to the club's facility in Goodyear, Arizona.

“He has very, very mild symptoms,” Antonetti said on a video call with reporters. “In fact, they were barely noticeable. He’s working through the protocols to return. We expect him to get back to the complex at some point within the next few days.”

Antonetti would not disclose when Bieber tested positive. Per Major League Baseball's protocols, Bieber has to isolate for at least 10 days from the time he tested positive. He's being monitored by the team's training staff and then will have to be medically cleared before he's allowed to integrate with the team.

Antonetti said Bieber had been working out at the team's complex this winter.

While Bieber's coronavirus case doesn't appear to be serious, it's yet another reminder to players of the importance of vigilance in following the protocols and safety measures they dealt with while completing a 60-game schedule and postseason last year.

“We all need to keep each other safe,” Indians pitcher Adam Plutko. "We were wildly successful last year because we didn’t have any positives on our team. We didn’t have to deal with that. We didn’t have shutdowns. Because of that, we had success.

“So, I hope everybody here in Goodyear is very conscious of what they’re doing on and off the field to protect each other as teammates.”

Bieber, who was first introduced to many fans by winning the All-Star Game MVP in 2019 when the event was in Cleveland, has gone 34-14 over the past three seasons.

Even more so than last year, the Indians will count on Bieber to anchor their strong starting staff and keep the club competitive following the trade of All-Star shortstop Francisco Lindor and right-hander Carlos Carrasco to the Mets.

When asked why the Indians will stay competitive this season, Antonetti said: “Shane Bieber and (third baseman) José Ramírez."

After Bieber's stellar season, it's hard to pick one area he needed much improvement, but Antonetti said that didn't dissuade the right-hander from putting in the needed work.

“With Shane, first and foremost, is just setting that great foundation that he does every winter coming into spring training and be positioned to absorb a workload,” Antonetti said. “And hopefully this year that’s 200-plus innings of really high-quality performance. And Shane, to his credit, one of the things that continues to separate him out is the way in which he attacks his work and prepares for a season.”