Indians push on without Lindor, lean on Bieber, pitching 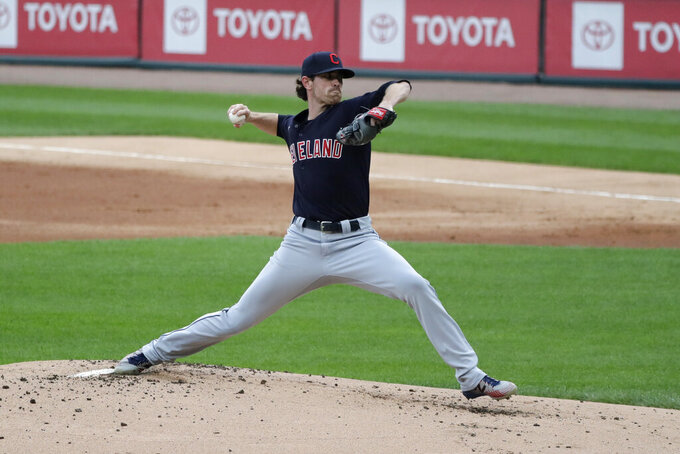 FILE - Cleveland Indians starting pitcher Shane Bieber throws the ball against the Chicago White Sox during the first inning of a baseball game in Chicago, in this Sunday, Aug. 9, 2020, file photo. The 25-year-old led the majors in wins, ERA and strikeouts, a rare pitching Triple Crown that earned the right-hander a Cy Young Award and stamped him as one of baseball's top pitchers. (AP Photo/Nam Y. Huh, File)

CLEVELAND (AP) — Since their odd 2020 season ended with a quick playoff exit, the Indians traded the face of their franchise and a popular pitcher and announced they're changing their name, those decisions further enraging an already angry fan base.

Other than that, it was a quiet winter.

Cleveland's eventful offseason wasn't entirely surprising. It was only a matter of time before the Indians would have to part with shortstop Francisco Lindor, who had moved way out of their range. So they swallowed hard and dealt him to the New York Mets with starter Carlos Carrasco in January.

The Indians had a marvelous six-year run with Lindor, winning three straight AL Central titles and getting to Game 7 of the World Series in 2016 with the four-time All-Star, Gold Glove winner.

Continuing to win won't be easy without him.

"Frankie is one of the top players in the game of baseball," Indians manager Terry Francona said. “And that’s hard to replace. Sometimes you don’t just replace that with one bat, and we know that. And the next guy, whoever our shortstop is this year, he doesn’t have to be Francisco Lindor.

But it's reality, and the truth is that Lindor's loss is a substantial blow to a team that hasn't raised a World Series title flag since 1948 — the majors' longest current drought — and may have fallen behind two other teams in its division.

The Indians finished 35-25 last season, tied with Chicago for second behind Minnesota, before they were swept 2-0 by the New York Yankees in the wild-card round. The COVID-19 pandemic provided its own myriad obstacles in 2020, and the club spent most of the season without Francona because of his ongoing health issues.

And while the season didn't end the way the Indians hoped, Shane Bieber's emergence as the staff's ace helped soothe some of the pain.

The 25-year-old led the majors in wins, ERA and strikeouts, a rare pitching Triple Crown that earned the right-hander a Cy Young Award and stamped him as one of baseball's top pitchers. He'll anchor a strong but inexperienced starting staff that will be counted on by Francona to pitch deep into games.

Bieber knows the outside perception is the Indians are trending the wrong way, but he's assured they remain contenders, and with MVP candidate José Ramírez they have a player capable of carrying their offense.

“Very confident,” he said. "We had a young team last year, and we’ve got a young team this year again. We were kind of learning on the fly last year. That's the beauty of baseball, Major League Baseball specifically, turning over rosters year after year.

“You gotta learn each other and learn on the fly, but I guess if anything, it’s fortunate we’ve got quite a bit longer season this year, a little bit more time to work towards our ultimate goal.”

This is Francona's ninth season with Cleveland, if you count last year. He might not.

Francona had another medical setback before training camp — a staph infection in his foot. But the 61-year-old feels recharged and is excited about his young team.

The Indians made sure they had a succession plan in place for Lindor when they acquired Andrés Giménez and Amed Rosario from the Mets.

Giménez has had an impressive camp and appears to have locked up the starting shortstop's job. The club is giving Rosario outfield work and may keep him as a utility player.

“Part of the reason we felt comfortable enough to move Amed is because of what we see in Giménez,” Francona said of the 22-year-old, who played in 49 games for the Mets in 2020. “This kid has really been bright spot for us.”

Cleveland has become a pitching factory.

No organization has done a better job of developing young pitchers in recent years than the Indians, who can take credit for molding Bieber and turning Trevor Bauer and Corey Kluber into Cy Young winners before trading them.

They'll need to work some of their magic with right-handers Zach Plesac, Aaron Civale and Triston McKenzie, who will have larger roles and throw more innings than ever in '21.

Like many teams, Cleveland's bullpen has several pitchers capable of throwing 100 mph.

“Last year I don’t know where we ranked as far as velocity goes. I bet it was toward the bottom,” Francona said. "I also thought we had a pretty good bullpen. So, ultimately what I care about is getting them out. But I admit it’s kind of exciting when you see some of the arms."

This will be likely be the Indians' final season with a name they've had since 1915. The move will follow Cleveland's earlier decision to remove the Chief Wahoo logo from its game jerseys and caps.