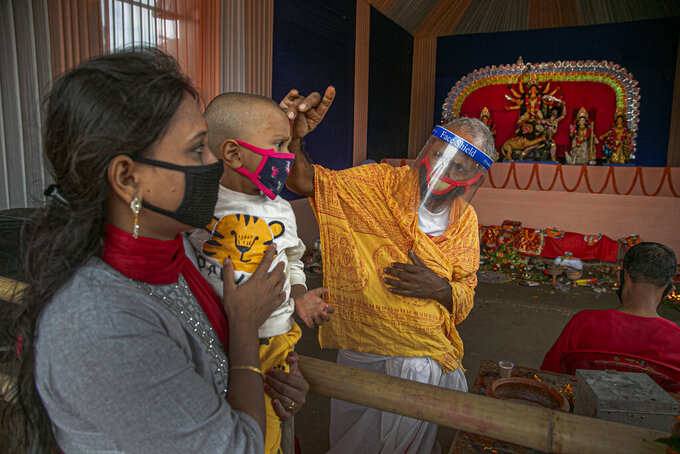 A Hindu priest wearing a face shield applies vermilion paste on the forehead of a child during Durga Puja festival in Gauhati, India, Saturday, Oct. 24, 2020. Weeks after India fully opened up from a harsh lockdown and began to modestly turn a corner by cutting new infections by near half, a Hindu festival season is raising fears that the disease could spoil the hard-won gains. Health experts worry the festivals can set off a whole new cascade of infections, further testing and straining India’s battered health care system. (AP Photo/Anupam Nath)

NEW DELHI (AP) — Just weeks after India fully opened up from a harsh lockdown and began to modestly turn a corner by cutting new coronavirus infections by near half, a Hindu festival season is raising fears that a fresh surge could spoil the hard-won gains.

“I’d be very worried about what we are going to see in India,” said Dr. Ashish Jha, the dean of Brown University’s School of Public Health and a leading infectious disease expert.

The festivals draw tens and thousands of people, packed together shoulder-to-shoulder in temples, shopping districts and family gatherings, leading to concerns among health experts who warn of a whole new cascade of infections, further testing and straining India’s battered health care system.

The Hindu festival season is traditionally laced with an unmatched fanfare and extravaganza, with socializing being the hallmark of the celebration. But this year's festivities have started on a pale note.

So far, the colorful and elaborate rituals for Durga Puja and Dussehra have been scaled down. The celebrations, bereft of all the grandiose, have been muted. The towering displays of religious sculptures are rare, and at many places, prayers have gone virtual, with organizers livestreaming the sessions for the devotees.

In many states, police barricades have been erected around the usually buzzing places of worship to avoid large gatherings.

But this could change.

Nearly 1 billion Indians will soon celebrate Diwali, the Hindu festival of light, and the country’s biggest. Socializing is key part of the most highly anticipated event of the year, with malls and markets buzzing with shoppers. It also traditionally brings in a massive increase in consumer spending across India.

Even though the government is expecting the festival to help resuscitate the ailing economy, it is also worried about people packing together, foregoing social distancing and masks.

Such concerns prompted Prime Minister Narendra Modi to address the nation in a televised speech earlier this week, warning people of “any laxity” during the festive season that "could strain India’s health system.”

India is second to the United States with the largest coronavirus outbreak. Last month, the country hit a peak of nearly 100,000 cases in a single day, but since then daily infections have fallen by about half and deaths by about a third.

Some experts say the decline in cases suggests the virus may have finally reached a plateau but others question the testing methods. India's testing rate has remained constant but it is relying heavily on antigen tests, which are faster but less accurate than traditional RT-PCR tests.

Even as the reasons behind the decline are not fully clear, India is still clocking more than 50,000 cases a day, making any new surge all the more important.

These fears stem largely from India's initial success story — until it wasn't.

In June, the southern coastal state of Kerala was cheered for flattening the curve, generating worldwide appreciation, even from the United Nations. But in a stunning reversal, it now fares as the second-worst state in active coronavirus cases in the country.

Kerala’s story has alarmed health experts who fear similar problems in the runup to Diwali that could reverse the gains.

“If we don’t avoid socializing during the upcoming festival season, I fear we will be back to where we started,“ said Dr. T. Jacob John, a retired virologist. “There is a significant risk ahead of us.”

For the many faithful, scaled-down celebrations aren't bringing home festival cheer and the urge to step out is only growing.

Sumita Chaterjee’s family has avoided outdoor gatherings for months after the 64-year-old resident of New Delhi and her granddaughter survived the virus in late June.

But now the family is planning to forego the restraint and take part in a ritual where the idol of goddess Durga will be immersed in a community pool on Sunday. The entire neighborhood is expected to take part in the ritual.

“This is a matter of faith,” said Chaterjee. “I know there are risks but we can't make the gods angry.” ___