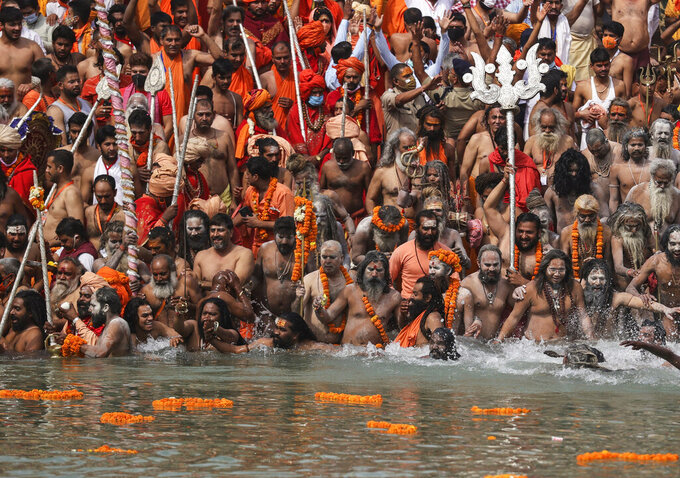 FILE - In this April 12, 2021, file photo, Hindu holy men take dips in the Ganges River during Kumbh Mela, or pitcher festival, one of the most sacred pilgrimages in Hinduism, in Haridwar, northern state of Uttarakhand, India. Despite clear signs that India was being swamped by another surge of coronavirus infections, Prime Minister Narendra Modi refused to cancel the festival, along with campaign rallies and cricket matches with spectators. The burgeoning crisis has badly dented Modi’s carefully cultivated image as an able technocrat. (AP Photo/Karma Sonam, File)

NEW DELHI (AP) — India’s hospitals were packed with coronavirus patients, relatives of the sick scrambled to find supplies of oxygen, and crematoriums were running near full capacity to handle the dead.

Yet despite those clear signs of an overwhelming health crisis, Prime Minister Narendra Modi pressed ahead with a densely packed campaign rally.

“I have never seen such a huge crowd before!” he roared to his supporters in West Bengal state on April 17, before key local elections. “Wherever I can see, I can only see people. I can see nothing else.”

As another deadly wave of COVID-19 infections was swamping India, Modi's government refused to cancel a giant Hindu festival. Cricket matches, attended by tens of thousands, carried on, too.

The catastrophic surge has badly dented Modi’s political image after he drew praise last year for moving quickly to lock down India’s nearly 1.4 billion people. Now, he’s been called a “super-spreader” by the vice president of the Indian Medical Association, Dr. Navjot Dahiya.

With deaths mounting and a touted vaccine rollout faltering badly, Modi has pushed much of the responsibility for fighting the virus onto poorly equipped and unprepared state governments and even onto patients themselves, critics say.

“It is a crime against humanity,” author and activist Arundhati Roy said of Modi’s handling of the virus. “Foreign governments are rushing to help. But as long as decision-making remains with Modi, who has shown himself to be incapable of working with experts or looking beyond securing narrow political gain, it will be like pouring aid into a sieve.”

The 70-year-old, whose image as a technocrat brought him deep approval from a middle class weary of corruption and bureaucratic dysfunction, has been accused of stifling dissent and choosing politics over public health.

When the official COVID-19 death toll crossed 200,000 — a number experts say is a severe undercount — Modi was silent.

His government says it is on a “war footing,” ramping up hospital capacity, supplies of oxygen and drugs.

“The present COVID pandemic is a once-in-a-century crisis,” Information and Broadcasting Minister Prakash Javadekar told The Associated Press. “All efforts are being made to overcome the situation by the central government in close coordination with the state governments and society at large.”

When Modi won national elections in 2014, he presented himself as someone who could unlock economic growth by merging business-friendly policies with a Hindu nationalist ideology.

Critics saw him as craving power over the national welfare and catering to his Hindu nationalist base. They blamed him — although courts exonerated him — in the bloody 2002 anti-Muslim riots in Gujarat state, where he was chief minister.

The economy tumbled after his government overhauled India’s cash supply and introduced a goods and services tax. Yet, he easily won reelection in 2019 on a wave of nationalism following clashes with archrival Pakistan.

Despite a second term marred by a souring economy, widening social strife, and deadly clashes with neighboring China, “Modi has proven to be incredibly politically resilient,” said Milan Vaishnav, director of the South Asia program at the Carnegie Endowment for International Peace.

“He never called the virus a hoax. He took it seriously. He encouraged mask-wearing, social distancing. He encouraged the sorts of things health authorities everywhere have been calling for,” he added.

The strict lockdown, imposed on four hours’ notice, stranded tens of millions of migrant workers who were left jobless and fled to villages with many dying along the way. But experts say the decision helped contain the virus and bought time for the government.

Cases rose when the country started reopening in June 2020, and the government developed emergency infrastructure plans. When the wave receded and reported cases plummeted over the winter, many officials saw it as a triumph. States dismantled makeshift hospitals and delayed adding ICU beds and ventilators.

The government had sought to create 162 oxygen plants earlier, but has only built 38. It says 105 more will be built this month.

The fragile health care system was not upgraded enough, said Gautam Menon, a science professor at Ashoka University, “and with the current surge, we’re seeing precisely the consequences of not doing this.”

When cases ebbed in January, Modi crowed about India’s success, telling the World Economic Forum that the country “has saved humanity from a big disaster by containing corona effectively.”

His ruling Bharatiya Janata Party hailed his “visionary leadership,” making India a “proud and victorious nation in the fight against COVID.”

In mid-March, tens of thousands attended cricket matches against England at Narendra Modi stadium in Gujarat, an event that swelled national pride even amid warnings that infections were climbing.

On March 21, advertisements on the front pages of newspapers read, “Beautiful Clean Safe,” as Modi and a political ally welcomed Hindu devotees to the Kumbh Mela, a pilgrimage to the Ganges River that drew millions throughout April.

By contrast, in March 2020, his government blamed a Muslim gathering of 3,000 for an initial spike in infections in a move that triggered violence and boycotts, even as courts dismissed the accusations.

Critics have blasted the BJP for holding election rallies packed with tens of thousands of unmasked supporters, particularly in West Bengal. Other parties also campaigned to large crowds. Bowing to criticism, Modi began appearing over video instead of live, but the crowds remained.

Though his party was defeated in the state, analysts say he still enjoys popularity nationwide.

Meanwhile, India’s vaccination campaign begun in January has sputtered amid perceptions the virus was defeated. Only 10% of the population has received one shot and fewer than 2% have gotten both since it began in January.

The latest effort to inoculate those between 18 and 44 has been left to states and the private sector — an approach that critics say will make it easier for the government to pass blame when problems arise. Already, several states have said they don’t have enough vaccine to even start.

The surge has sparked assistance from overseas, a reversal of India’s earlier success at “vaccine diplomacy” when it exported 64 million doses. Some say Modi’s flagship self-sufficiency campaign, known as “Make in India,” is being undermined.

“India has long sought to project itself as a strong nation that need not be dependent on any other. Its immediate need for international assistance flies in the face of that image,” said Michael Kugelman of the Asia Program at the Washington-based Wilson Center.

“What kind of government is this? What kind of PM is Modi?” said Vishal Gangwar. “If he cannot provide treatment to a lawmaker of his own party, what is happening to a common man is anybody’s guess.”

To circumvent such criticism, the government ordered Twitter to remove posts criticizing his pandemic response. In BJP-run Uttar Pradesh, authorities recently charged a man over a tweet pleading for oxygen for his dying grandfather, accusing him of “circulating a rumor," as top officials deny widespread oxygen shortages.

“To blame social media or users for either critiquing or begging for help is just — I mean, what are their priorities? To help people or silence criticism?” said digital rights activist Nikhil Pahwa.

The level of urban and middle class anger at Modi is unprecedented, political analyst Vaishnav said, although it is blunted by supporters who believe he can do no wrong.

“He shouldn’t be expected to solve all problems by himself. The government machinery which existed before him, full of corruption, is to blame,” said Sunil Saini, a driver in New Delhi. “My vote will go to Modi the next time too.”