Indie bookstores avoid the worst — so far — from pandemic 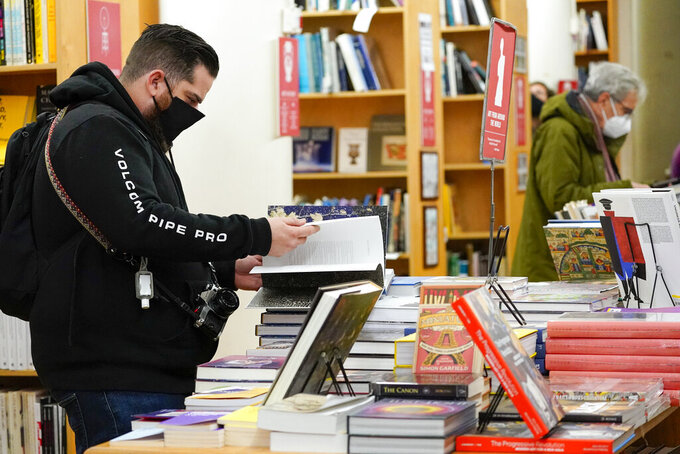 FILE- In this Saturday, Nov. 28, 2020, file photo, customers browse while shopping for books at the Strand Bookstore, an independent family owned bookstore founded in 1927 in New York. On Thursday, the American Booksellers Association said that membership increased from 1,635 to 1,701 since May 2020, the additions a combination of brand new stores and existing stores that had not previously been part of the independents’ trade group. While association CEO Allison Hill and others had feared that hundreds of stores could go out of business during the 2020-21 holiday season, the ABA so far has only tallied 14 closings in 2021, along with more than 70 last year. (AP Photo/Mary Altaffer, File)

NEW YORK (AP) — Through the first year of the pandemic, the country's independent booksellers have — so far — avoided disaster.

On Thursday, the American Booksellers Association told The Associated Press that membership increased from 1,635 to 1,701 since May 2020, the additions a combination of brand-new stores and existing stores that had not been part of the independents' trade group. While association CEO Allison K. Hill and others had feared that hundreds of stores could go out of business during the 2020-21 holiday season, the ABA has tallied only 14 closings in 2021 so far, along with more than 70 last year.

“It's fair to say that it could have been much, much worse,” Hill said, describing the independent community as “bruised” but standing.

Hill cited a few factors that helped compensate for pandemic-caused shutdowns and limited hours: PPP loans that enabled some owners to meet their payrolls, a surprisingly strong holiday season in December, increased online sales, and the rise of bookshop.org, an online seller that partners with independent stores and has directed more than $14 million to them in revenues.

But Hill said business for independent stores remains “more challenging than ever,” with many owners not expecting in-person events at least through the summer and still facing the growing strength of Amazon.com. While book sales overall have been strong during the pandemic, much of that has been at either Amazon or discount chains that sell books such as Walmart and Target.

“We’re open, we’re not making a profit, our sales are less than half of what they used to be," said Bryanne Hoeg, manager of the Portland, Oregon-based Powell's Books, during an online panel this week at the inaugural U.S. Book Show. "We can’t have in-store events. We have to ask everyone to use a mask and no, we don’t have a bathroom.”

Bookstores are trying to reinvent themselves, and so is the American Booksellers Association — starting with what it means to be a “bookstore” and how one becomes an association member.

In 2019, the ABA had more than 1,800 members (and more than 2,500 store locations), a substantial increase from a decade before when core membership had fallen to just over 1,400 — after once exceeding 5,000 — in face of competition from Amazon and from such physical bookstore chains as Barnes & Noble and Borders. The demise of Borders and the unexpectedly limited appeal of e-books helped the independents grow in recent years.

Hill said the current membership numbers, which include nearly 2,100 locations, are smaller than in 2019 because the association has tightened its rules. Before 2020, essentially any store that happened to offer books could be an ABA member. Now, only “businesses who primarily sell books (over 50% of inventory)” are eligible, according to the association's website.

The ABA also became stricter last year in counting its “inactive” members, those that had not responded to repeated efforts to renew their membership. Unlike in previous years, “inactive” members are not automatically included in the total numbers. (The status of dozens of such stores remains undetermined, according to the ABA).

“The opening of new stores” is still a priority, Hill said. But the association is now taking a “more holistic view” in measuring the state of independent selling, with factors including diversity, profitability, and finding new management when an existing owner wants to retire.

The ABA is in transition in other ways. Criticized for its predominantly white leadership and membership, it has established a Diversity, Equity, and Inclusion Council, and, in its announcement Thursday, cited the addition of 23 BIPOC-owned stores as members. It has also expanded the definition of a “store.” While many members are traditional general interest bookstores, whether the Tattered Cover in Denver or Books & Books in Coral Gables, Florida, others are “pop-up" sellers setting up temporary or online-only outlets, such as Marianne Reiner's runforcoverbookstore.com.

Reiner, based in San Diego, had opened Run For Cover as a physical store in 2018 and was anticipating a strong 2020 before the pandemic hit. With sales plunging and the rent not going down, she decided to shut down the store and become a digital seller instead, a “concierge” personally delivering books to customers and including hand-written notes.

“It's been a challenging year, but a good one,” Reiner said, adding with a laugh, “I may even be able to pay myself a little.”