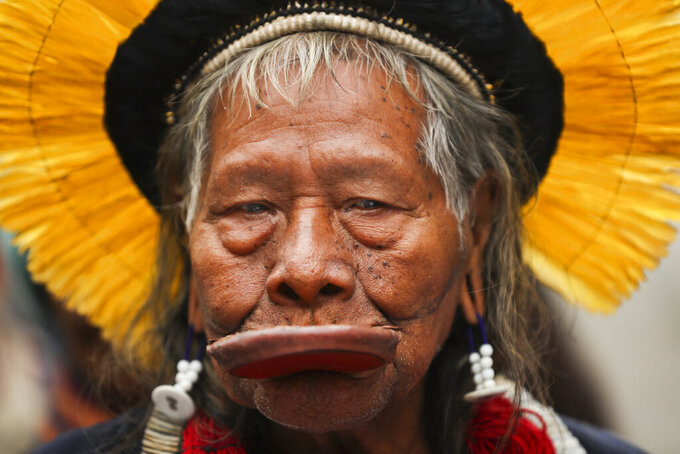 FILE - In this May 17, 2019 file photo, Brazil's rainforest activist Chief Raoni Metuktire attends a march for climate in Brussels. The 90-year-old leader who has become a symbol of the fight for Indigenous rights and preservation of the Amazon rainforest has been hospitalized, his institute and a relative confirmed Saturday, July 18, 2020. (AP Photo/Francisco Seco, File)

BRASILIA, Brazil (AP) — Chief Raoni Metuktire, an Indigenous leader who has become a symbol of the fight for Indigenous rights and preservation of the Amazon rainforest in Brazil, has recovered from an illness after being hospitalized for 10 days, a doctor said Saturday.

Raoni had been taken to a private hospital in Sinop, a city in Mato Grosso state in western Brazil, from his home in the Xingu Indigenous reservation after suffering diarrhea and dehydration, said his great-nephew, Patxon Metuktire. Raoni had tested negative for the new coronavirus.

“Now I’m healed. I wanted to tell you that disease comes at any time. Think about it and love and respect each other because we don’t know tomorrow. The disease does not warn when it comes,” Raoni, the nearly 90-year-old Kayapó ethnic leader, said at a press conference.

Raoni “is still a little weak, but already strong enough to continue to lead his people,” said Dr. Douglas Yanai, adding that Raoni had been formally discharged. Raoni later left the hospital after logistics for his trip home were arranged.

According to the doctor, Raoni had been suffering low blood pressure and anemia. He had ulcers and had to undergo two blood transfusions. The Indigenous leader was very upset by the recent death of his wife.

Raoni has campaigned for decades for the protection of Indigenous territories in the Amazon and for the rainforest itself.

A 1978 documentary, “Raoni: The Fight for the Amazon,” helped make him famous, as did a 1989 tour with the musician Sting.

He has been an outspoken critic of Brazilian President Jair Bolsonaro and visited European leaders last year to denounce Bolsonaro’s calls for developing Indigenous lands in the rainforest. Bolsonaro, who has rejected a call by French President Emmanuel Macron to meet Raoni, has said developing land is key to Brazil's economic prosperity.