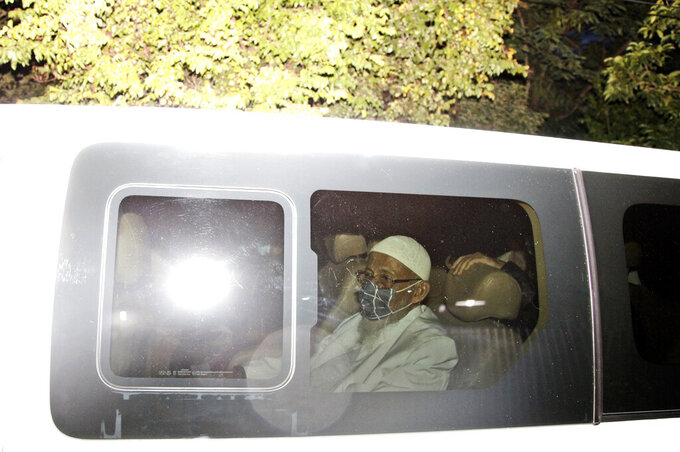 Islamic cleric Abu Bakar Bashir sits inside a van as he leaves upon his release from Gunung Sindur Prison in Bogor, West Java, Indonesia, Friday, Jan. 8, 2021. The convicted firebrand cleric who inspired the Bali bombers and other violent extremists walked free from prison Friday after completing his sentence for funding the training of Islamic militants. (AP Photo/Aditya Irawan)

JAKARTA, Indonesia (AP) — A firebrand cleric who inspired bombings in Bali and other attacks walked free from an Indonesian prison Friday after completing his sentence for funding the training of Islamic militants.

Police said they will monitor the activities of Abu Bakar Bashir, who is 82 and ailing. His son said Bashir will avoid activities outside his home due to the coronavirus pandemic.

The slender, white-bearded Bashir, an Indonesian of Yemeni descent, was the spiritual leader of the al-Qaida-linked Jemaah Islamiyah network behind the 2002 bombings on the tourist island of Bali that killed 202 people, mostly foreign tourists, including 88 Australians, leaving a deep scar in that country.

Bashir was imprisoned in 2011 for his links to a militant training camp in religiously conservative Aceh province. He was convicted of funding the military-style camp to train Islamic militants and sentenced to 15 years in jail.

He received a total of 55 months of sentence reductions, which are often granted to prisoners on major holidays, said Rika Aprianti, spokesperson for the corrections department at the Justice Ministry.

“He is released as his sentence ends,” Aprianti said.

Bashir, wearing a white robe and mask, was escorted by the National Police's counterterrorism squad, known as Densus 88, when he left at dawn from Gunung Sindur prison in West Java's Bogor town, Bashir's son, Abdul Rohim, told The Associated Press.

He said the family, lawyers and a medical team accompanied Bashir to his home at the Islamic boarding school he cofounded in Solo city, about 540 kilometers (335 miles) east of the capital, Jakarta.

Rohim said the family had agreed with authorities not to hold any celebrations to welcome Bashir.

“I just want to keep my father from crowds during the coronavirus pandemic,” Rohim said. “He will only rest and gather with his family until the outbreak ends. There will be no other activities for him for sure.”

School spokesperson Endro Sudarsono said it held no welcoming events because "we have agreed with authorities to keep away a large crowd to curb the spread of the coronavirus.”

Police removed five large welcoming banners and dozens of smaller placards, saying they would attract people, and replaced them with a single banner announcing there would be no celebrations.

In Australia, Prime Minister Scott Morrison described Bashir's release as “gut wrenching” and said the government had long called for tougher sentences against those behind the bombings.

“Decisions on sentencing ... as we know, are matters for the Indonesian justice system and we have to respect the decisions that they take,” Morrison said Friday.

He said that while Bashir's release was consistent with the Indonesian justice system, “That doesn’t make it any easier for any Australian to accept that ... ultimately, those who are responsible for the murder of Australians would now be free. It’s sometimes not a fair world. And that’s one of the hardest things to deal with."

Indonesian authorities had struggled to prove Bashir's involvement in the Bali bombings and fought multiple battles to uphold convictions on other charges. Prosecutors were unable to prove a string of terrorism-related allegations, a treason conviction was overturned, and a sentence for a document forgery conviction was considered light.

Upon release from prison in 2004, he was arrested and again charged with heading Jemaah Islamiyah as well as giving his blessing to the Bali bombings. A court cleared him of heading the group but sentenced him to 30 months for conspiracy in the bombings.

After his release in 2006, he resumed teaching at the Al-Mukmin boarding school he cofounded in 1972 and traveled the country giving fiery sermons.

The school became a militant production line under Bashir’s influence, radicalizing a generation of students. Many later terrorized Indonesia with bombings and attacks that aimed to bring about an Islamic caliphate and battered the country’s reputation for tolerance.

In speeches, Bashir said al-Qaida leader Osama bin Laden and three militants sentenced to death for the Bali bombings were not terrorists but “soldiers in Allah’s army.”

A court banned Jemaah Islamiyah in 2008, and the group was weakened by a sustained crackdown on militants by Indonesia’s counterterrorism police with U.S. and Australian support.

A 2010 raid on the camp that Bashir helped fund was a crushing blow to radical networks in Indonesia and forced changes in the mission of Islamic extremists. Instead of targeting Western people and symbols, the militants targeted Indonesians who were deemed “infidels” such as police, antiterrorism squads, lawmakers and others who were seen as obstacles to transforming the secular country into an Islamic state governed by Shariah law. More recently, militants have been inspired by Islamic State group attacks abroad.

Sidney Jones, director of the Jakarta-based Institute for Policy Analysis of Conflict, which closely monitors Southeast Asian Muslim militant groups, said Bashir’s release is unlikely to increase the risk of terrorism in Indonesia because many would-be terrorists today are too young to remember the Jemaah Islamiyah bombing campaign that took place while Bashir was its leader.

“Extremist cells are far more fractured than they were when Bashir went into prison,” she said, adding that Bashir has not written anything that could be used as a teaching material for radical groups.

“Moreover, with the government crackdown on ‘radicals,’ I doubt Bashir is going to have much room for radical preaching, even if he wanted to,” Jones said.

Bashir was transferred from isolation on a prison island to Gunung Sindur prison in 2016 for age and health reasons and was in a hospital several times due to his deteriorating health.

President Joko Widodo almost granted a request for his early release in 2019 on humanitarian grounds but reversed himself after protests from the Australian government and from relatives of the Bali bombings victims.