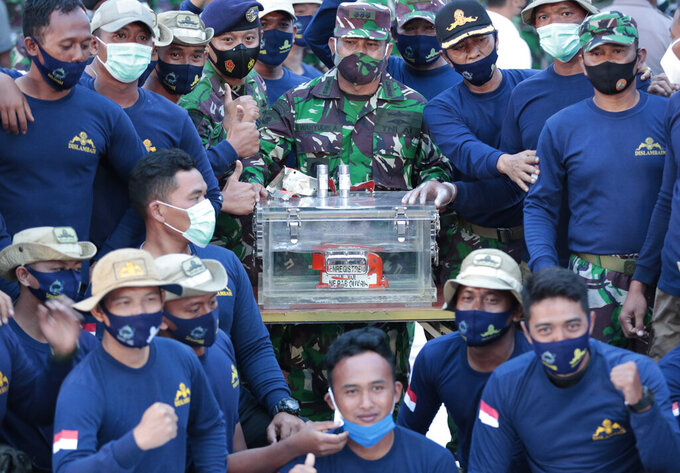 Indonesian Navy personnel pose for photos with the flight data recorder recovered from the wreckage of Sriwijaya Air flight SJ-182 in the Java Sea at Tanjung Priok Port, Tuesday, Jan. 12, 2021. Indonesian navy divers searching the ocean floor on Tuesday recovered the flight data recorder from a Sriwijaya Air jet that crashed into the Java Sea with 62 people on board, Saturday, Jan. 9, 2021. (AP Photo/Dita Alangkara)

JAKARTA, Indonesia (AP) — Divers searching for a crashed jet's cockpit voice recorder were sifting through mud and plane debris on the seabed between Indonesian islands on Wednesday to retrieve information key to learning why the Sriwijaya Air jet nosedived into the Java Sea over the weekend.

Indonesian navy divers on Tuesday recovered the flight data recorder from the jet that disappeared Saturday minutes after taking off from Jakarta with 62 people aboard. The information on both black boxes will be key to the crash investigation.

The 26-year-old Boeing 737-500 had resumed commercial flights last month after almost nine months out of service because of flight cutbacks caused by the coronavirus pandemic.

The U.S. Federal Aviation Administration sent an airworthiness directive requiring operators of various Boeing 737 aircraft models, including the 737-500, to carry out engine checks before they can be flown again after being out of service. The order followed reports of engines shutting down in mid-flight because of corrosion in a key valve.

Director General of Air Transportation Novie Riyanto said the plane was inspected on Dec. 2, including checks for engine corrosion, and was declared airworthy by Indonesia’s Transportation Ministry on Dec. 14. It resumed commercial flights on Dec. 22, according to ministry data. After returning to service, the plane made 132 flights, including the last one, according to aviation-data firm Flightradar24.

Aviation experts said planes that are parked for long stretches can be returned to flight safely.

“It depends on how the airline maintains the aircraft while it is grounded,” said William Waldock, an aviation-safety expert at Embry-Riddle Aeronautical University in Prescott, Arizona. He said airlines should run engines periodically and perform other maintenance. “It tends to keep everything lubricated, and it reduces the likelihood of corrosion building up in places you don’t want it to be,” he said.

John Goglia, a former member of the U.S. National Transportation Safety Board, said preparing a long-grounded jet can be an intensive and expensive chore, taking a team of mechanics up to two weeks to check engines and make sure that electronic, hydraulic and fuel systems are operating and free of contamination.

Goglia said that his initial thought on learning about the plane’s long grounding “was if they did the proper due diligence, because sometimes that stuff doesn’t show up for a little while.”

Navy officials have said the two black boxes were buried in seabed mud under tons of sharp objects in the plane’s wreckage, slowing the search efforts. A signal that may be from the cockpit voice recorder was detected near where the flight data recorder was recovered, between Lancang and Laki islands in the Thousand Island chain just north of Jakarta.

At least 160 divers were deployed Wednesday to boost the search for the recorder that holds conversations between pilots.

More than 3,300 rescue personnel, 13 helicopters, 54 ships and 20 raft boats searched Wednesday in the area of the java Sea where the jet crashed and have found parts of the plane and human remains.

Bambang Suryo Aji, the National Search and Rescue Agency’s operations director, told reporters that bad weather and high waves up to 5 meters (16 feet) high forced authorities to suspend the search in the afternoon.

So far, the searchers have sent 139 body bags containing human remains to police identification experts. Anguished family members have been providing samples for DNA tests to the disaster victim identification unit, which on Tuesday said it had identified four victims.

The U.S. National Transportation Safety Board said Wednesday that the team it is sending to join the crash investigation will arrive in a few days.

The four NTSB investigators will be joined by personnel from the U.S. Federal Aviation Administration, General Electric and Boeing, who have expertise in operations, human performance, airplane structure and systems, the NTSB wrote on Twitter.

The airline’s data showed that both pilots in command of the plane were highly experienced and had relatively good safety records.

Capt. Afwan, who goes by one name, began his career as an air force Hercules pilot and had several decades of flying experience. He was known to his relatives and friends as a devout Muslim and preacher. Afwan’s co-pilot, Diego Mamahit, was equally qualified.

Nurcahyo Utomo, an investigator with Indonesia’s National Transportation Safety Committee, said the crew did not declare an emergency or report technical problems before the plane nosedived into the sea.

Indonesia's aviation industry grew quickly after the nation's economy was opened following the fall of dictator Suharto in the late 1990s. Safety concerns led the United States and the European Union to ban Indonesian carriers for years, but the bans have since been lifted due to better compliance with international aviation standards.