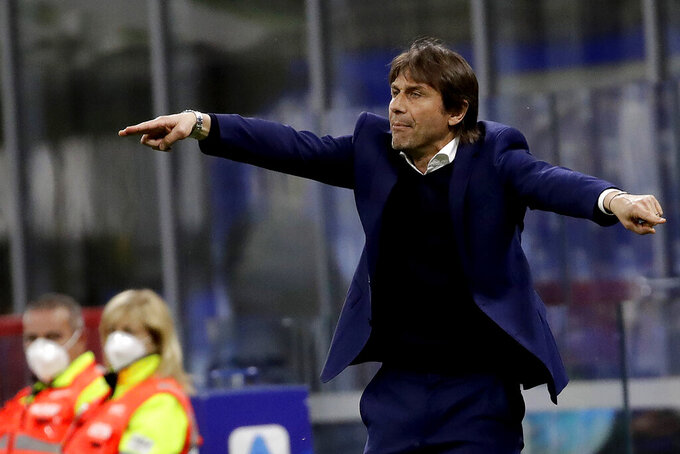 Inter Milan's head coach Antonio Conte gives instructions to his players during a Serie A soccer match between Inter Milan and Roma at the San Siro stadium in Milan, Italy, Wednesday, May 12, 2021. (AP Photo/Luca Bruno)

MILAN (AP) — Inter Milan coach Antonio Conte left the newly-crowned Serie A champion by “mutual consent” Wednesday, just weeks after leading the Nerazzurri to their first league title in more than a decade.

Conte was reportedly unhappy about the club’s decision to sell players in this coming transfer window because of financial constraints.

“Inter can confirm that an agreement has been reached with Antonio Conte for the termination of his contract by mutual consent,” the club said in a statement. “The club would like to thank Antonio for the extraordinary work that he has done, culminating in Inter’s 19th top-flight title. Antonio Conte will forever remain a part of our club’s history.”

Conte had openly contemplating leaving Inter a year ago when he severely criticized the club’s Chinese owners for failing to “protect” the squad from criticism.

This season, Inter’s finances were hit badly by the coronavirus pandemic, as well as the club’s early elimination from European football. The club was forced to take out a vast loan from Oaktree Capital recently in a financing deal with the American investment fund.

Inter’s owner Suning and president Steven Zhang reportedly wanted to slash the wage bill by 20% and make a profit of around 100 million euros (122 million dollars) in the transfer market, likely by selling at least one of the club’s most important players.

Inter won its first Serie A title in 11 years this month, in Conte's second season in charge. The 51-year-old Conte had another season remaining on his contract.

He was keen to continue the project he had started at Inter and to build — rather than detract from — his squad in order to be able to challenge in the Champions League. Inter finished bottom of its Champions League group this season.

Conte rejuvenated a troubled Inter side when he took over in 2019 following a year off after being sacked by Chelsea.

Inter was in disarray after a season of turmoil, with underperforming stars and dressing-room discord. But Conte shook things up and transformed the squad with his strict, no-nonsense attitude and attention to detail.

Romelu Lukaku was one of the players that thrived under Conte's tutelage. The Belgium forward was one of his first signings and has gone from strength to strength since signing from Manchester United for around 80 million euros (then $90 million).

“You came at the right time and basically changed me as a player and made me even stronger mentally and more importantly we won together!" Lukaku wrote, along with a picture of both of them.

“I will keep your principles for the rest of my career ... it was a pleasure to play for you! Thank you for all what you did. I owe you a lot.”

Conte previously won three Serie A titles with Juventus and won the Premier League with Chelsea in 2017. He also coached the Italy national team.

Conte came close three times to ending Inter’s lengthy wait for a trophy in his first season in charge. The club finished a point behind Juventus in Serie A and lost the Europa League final to Sevilla. The Nerazzurri also lost in the Italian Cup semifinals to eventual champion Napoli.

Inter last won the league in 2010 under José Mourinho, along with the Champions League title and the Italian Cup. It retained the domestic cup the following year.

Lazio coach Simone Inzaghi is reportedly top of the list of names being considered to replace Conte, along with former Juventus coaches Massimiliano Allegri and Maurizio Sarri as well as Bologna's Siniša Mihajlović, who used to play for Inter.