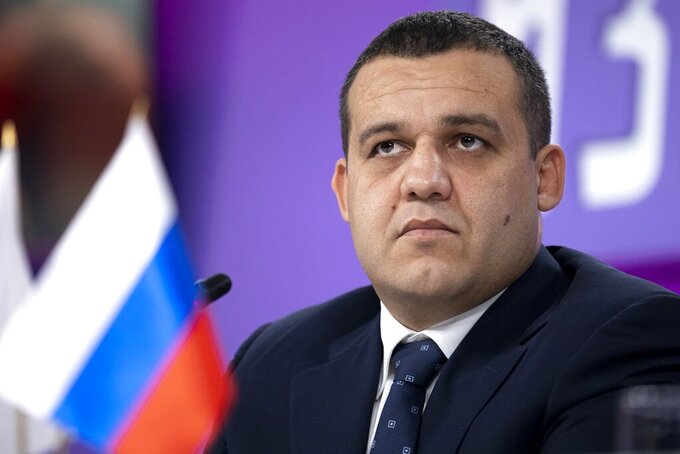 FILE - General Secretary of the Russian Boxing Federation, member of the Executive Committee of the International Boxing Association (AIBA) Umar Kremlev holds a news conference in Moscow, Russia, on Oct. 27, 2020. The challenger to the Russian incumbent in the presidential election at the troubled International Boxing Association has been ruled ineligible a day before the vote. Umar Kremlev is standing for re-election amid sanctions on Russian sports and concern the IBA is financially dependent on Gazprom. (AP Photo/Alexander Zemlianichenko)

GENEVA (AP) — With boxing’s status at the Olympics in doubt, the IOC was not impressed on Saturday with the leadership election of the sport’s governing body which was stripped of recognition in 2019.

International Boxing Association members re-elected their Russian president Umar Kremlev by acclamation two days after the only other candidate, from the Netherlands, was removed by an independent vetting panel.

“The events surrounding IBA’s general assembly, in particular the elections, merit careful analysis and are just reinforcing the questions and doubts around IBA’s governance,” the International Olympic Committee said in a statement.

Saturday’s vote marked the third presidential election in less than four years where boxing officials worldwide have elected a winner in defiance of IOC advice.

The IOC has for several years expressed concerns about the integrity of IBA’s management and finances, and potentially improper judging of bouts at the 2016 Rio de Janeiro Olympics under previous leadership.

The Olympic body excluded IBA from helping to organize boxing at the Tokyo Games last year, and left it off the initial slate of sports for the 2028 edition in Los Angeles.

Without a share of Olympic revenue from Tokyo, Kremlev has won support in boxing for clearing millions of dollars of IBA debts, though seemingly from a single Russian source.

“The various IOC concerns, including the financial dependency on the state-owned company Gazprom, are still not resolved,” the IOC said.

Boxing is due to be at the 2024 Paris Olympics but the IOC last week warned IBA members of concerns with the proposed qualifying path for hundreds of boxers.

The IOC said its executive board “will receive an update on the latest developments in IBA” at a two-day meeting next week.

Kremlev’s intended election opponent Boris van der Vorst has filed an appeal at the Court of Arbitration for Sport against being barred from the election. He faced complaints about prohibited collaboration with candidates for other IBA positions.