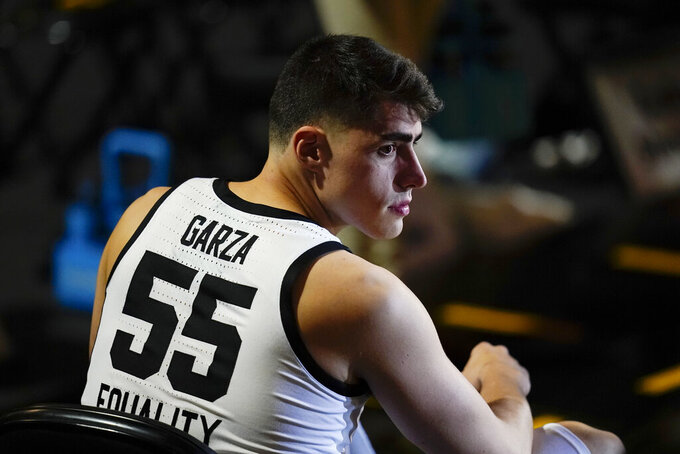 FILE - Iowa center Luka Garza sits on the bench before an NCAA college basketball game against Northwestern in Iowa City, Iowa, in this Tuesday, Dec. 29, 2020, file photo. For all the success Luka Garza has experienced at Iowa, he can't forget one moment of failure. With 1.6 seconds left against Illinois last March, Garza had a chance to tie the game when he took an inbound pass near the basket. Kofi Cockburn blocked his shot, and the Illini won 78-76. (AP Photo/Charlie Neibergall, File)

IOWA CITY, Iowa (AP) — For all the success Luka Garza has experienced at Iowa, he can't forget one moment of failure.

With 1.6 seconds left against Illinois last March, Garza had a chance to tie the game when he took an inbound pass near the basket. Kofi Cockburn blocked his shot, and the Illini won 78-76.

Garza had 28 points and eight rebounds that night, and the next day he was named Big Ten player of the year.

“Coming down to the last shot, me not being able to get a shot off, it’s definitely something that sticks in your head: ‘What could I have done better. Could I have made a better move?’," Garza recalled.

It will be Iowa's first game since an 81-69 home loss to Indiana on Jan. 21. A home game scheduled for last Sunday was postponed because of a COVID-19 outbreak at Nebraska.

Garza found it difficult to move on from his disappointment in the Illinois game because it turned out to be Iowa's season finale. The Big Ten Tournament and NCAA Tournament were canceled because of the pandemic.

Garza went through the NBA draft process and decided to come back to the Hawkeyes for his senior season. He's averaging 26.9 points per game and is on track to become the first Iowa player since Murray Wier in 1948 to lead the nation in scoring.

Last season, Garza was fifth nationally in scoring at 23.9 points per game and set the school single-season record with 740 points. Garza has scored 1,963 career points and is on track to become the second player in program history to reach 2,000. He needs 154 points to overtake Roy Marble as the all-time leader.

Coach Fran McCaffery said if Garza finishes the season atop the national scoring chart, it will be further testament to the impact the 6-foot-11 center has made in Iowa City.

“He’s a guy that when people get to know him, they just appreciate who he is as much as what he does,” McCaffery said. "He’s been a great leader. He’s a phenomenal teammate, one of the most consistent players I’ve ever been associated with.”

Iowa is 1 1/2 games behind Big Ten-leading Michigan, which will have at least four straight games postponed because of the school's athletic program shutdown last Saturday after a variant of the COVID-19 virus was found in testing.

The Hawkeyes haven't won a Big Ten regular-season title since 1979, and that is foremost in Garza's mind.

“Leading the nation in scoring, in the future that’s something I’m going to look back on and be proud of,” Garza said. “But right now, I came back to this team and this university to win, and that’s my main focus. It definitely would be a special accomplishment.”

Garza has managed to score 30 or more points in six games this season despite being the constant focus of defenses.

“In the offseason, I was watching a ton of film from last year, looking at different spots where I could attack the double-team better,” Garza said. “And that’s kind of translated into this season. Every game there’s clips about me handling the double-team — when I can find guys, when I can go myself. So I’ve just grown to be better and better at it.”