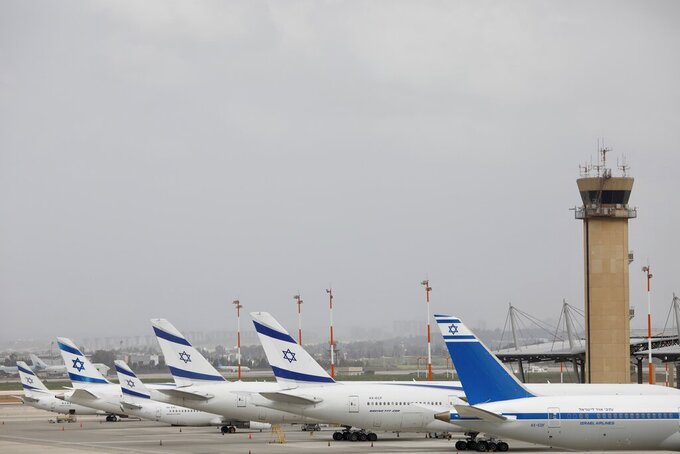 FILE - In this March 10, 2020 file photo, Israeli El Al planes are parked at Ben Gurion Airport near Tel Aviv, Israel. On Monday, July 6, 2020, El Al said it reached a bailout deal with the Israeli government that could lead to its nationalization after being crippled by the coronavirus pandemic. The agreement awaits approval by a Knesset committee. (AP Photo/Ariel Schalit, File)

TEL AVIV, Israel (AP) — Israeli airline El Al said Monday it had reached a bailout deal with the Israeli government that could lead to its nationalization after being crippled by the coronavirus pandemic.

The airline had been in talks on a rescue package for weeks after suffering from the steep decline in air travel sparked by the virus. Since the outbreak, it has suspended passenger flights indefinitely and carried out scores of layoffs.

Under the deal, the company will receive loans of $250 million, most of which will be guaranteed by the state. The company is expected to raise an additional $150 million by selling shares that, if they aren’t sold entirely to the public, will be bought by the state. The agreement awaits approval by a parliamentary committee.

“This evening the first step was taken to return El Al to the runway,” said Transportation Minister Miri Regev. “We will work to assist the company during the interim as is needed with the aim of protecting Israel's aviation independence.”

The company was previously state-owned until it was privatized more than 15 years ago. It has struggled repeatedly over the years, including with the arrival in Israel of international low-cost carriers.

Israelis view the company with a sense of national pride, since it was created at the same time as Israel’s establishment, and has played a central role in flying in hundreds of thousands of immigrants from the Jewish diaspora throughout the years. It also has a reputation for some of the world's most stringent security protocols.

Nationalizing the airline runs counter to the economic ideology of Israeli Prime Minister Benjamin Netanyahu, who has worked throughout his career to push Israel away from its socialist roots and has encouraged privatization.

But letting the company fail would have left Israel, which is bordered by Arab states, largely dependent on foreign airlines for its international travel.