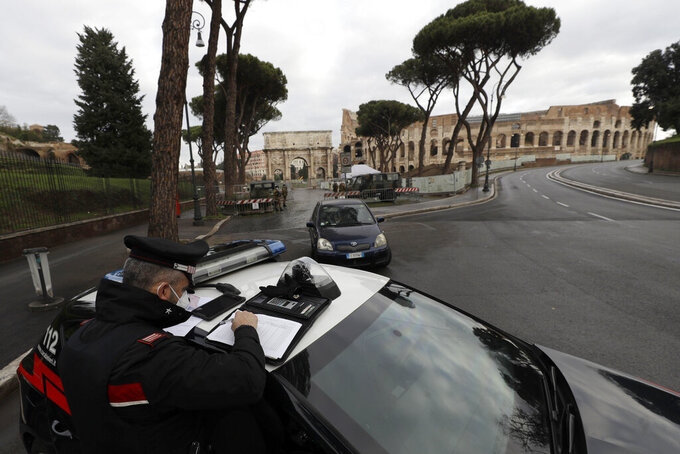 Italian Carabinieri officers check vehicles near the Colosseum in Rome, Thursday, Dec. 24, 2020. Italians are easing into a holiday season full of restrictions, and already are barred from traveling to other regions except for valid reasons like work or health. Starting Christmas eve, travel beyond city or town borders also will be blocked, with some allowance for very limited personal visits in the same region. (AP Photo/Gregorio Borgia)

A modified nationwide lockdown went into effect on Christmas Eve with restrictions and closures similar to the 10 weeks of hard lockdown the Italian government enforced from March to May, when Italy became the epicenter of the coronavirus pandemic in Europe.

The aim of the Dec. 24-Jan. 6 slowdown is to prevent a January resurgence after Italy's fall wave of coronavirus infections killed more people than during the country's first spring outbreak, according to official counts. Italy's total confirmed cases passed the 2 million mark Thursday, while 505 more deaths brought country's official toll in the pandemic to 70,900, the most in Europe.

Despite the new restrictions, Italians lined up at bakeries, fish markets and grocery stores for last-minute shopping to prepare their Christmas Eve dinners, traditionally multi-course, multi-generational affairs that are a holiday staple of Italian family life.

Italy, which had been under localized restrictions since early November, saw an exponential rise in infections slow since then. But the Health Ministry’s latest weekly monitoring report, released Thursday, suggested the downward trend was stalling.

Warning that hospitals still were at risk of getting overwhelemed, the ministry called for “a drastic reduction of physical interaction" among people beyond immediate family. The government urged Italians to limit their Christmas Eve “cenone" dinners to no more than two individuals who do not share the same household.

“It seems banal and you can ask ‘Why only two people outside the nuclear family?’” acknowledged Dr. Giovanni Rezza, in charge of prevention at the Italian health ministry. “But it’s clearly based on probability calculations: The more you increase the size of the gathering, the more risk there is that one of these people, especially if he or she is coming from somewhere else, can be infected and therefore pose a risk to others.”

To reduce that possibility, the government barred residents starting Monday from travelling from region to region. Police were out in force on Thursday to check that Italians on the road were obeying rules limiting travel within their own regions.

Carabinieri Col. Alessandro Dominici, on patrol in front of Rome's Colosseum, said sanctions run from 400 euros to 3,000 euros, ($488-$3,700 and can increase for multiple offenses.

Residents also had to carry police-issued certificates explaining why they were outside, with work, health care and other necessities such as grocery shopping allowed.

But Christmas Eve grocery runs proved to be crowded affairs as they often are this time of year. Shoppers in Rome lined up outside markets to pick up pre-ordered fish, which in much of southern Italy forms the backbone of the traditional holiday meal. Bakeries did brisk business selling “panettone” dried-fruit cakes or lighter yellow “pandoro” cakes dusted with powdered sugar that are staples for Christmastime desserts.

“Yesterday, there were 900 people in the fish department, all piled on top of one another," said Daniela Tufoni, who works in a Rome supermarket.

Tufoni said police officers pulled her over on Thursday to check that she had a legitimate reason to be out. “It's good that they do these checks, but if they go in the supermarkets, I cannot tell you what they'll find," she said from her car. “No one is respecting the distancing."

Catholic churches moved up the times of midnight Masses by a few hours so congregants could comply with a 10 p.m. curfew. Pope Francis planned to celebrate his Christmas vigil service starting at 7:30 p.m. before a small group in St. Peter's Basilica.

Non-essential shops, restaurants and bars were closed: Milan’s glass-domed Galleria mall was nearly empty, stores along Rome’s usually congested Via del Corso shopping street were shuttered and the pigeons had Venice’s St. Mark’s Square to themselves.

Restaurants and shops get a reprieve to reopen for business for a few days next week, before shuttering again before New Year's and the Jan. 6 Epiphany holiday, which marks the end of the lockdown period.

The Italian government is particularly concerned with the continued high demand for beds in both intensive care units and regular hospital wards dedicated to COVID-19 patients. Nationally, Italian hospitals remain just barely within the government-established benchmark of having no more than 30% of ICU beds and 40% of non-ICU beds dedicated to virus patients.

Officials are aiming to keep COVID-19 hospitalizations below those thresholds so patients with other medical needs can receive treatment. Regions that go too far over the benchmarks have been put under tougher restrictions to bring down infections and related hospitalizations.

Italy is set to join the other European Union nations in administering their first doses of a COVID-19 vaccine Sunday, with health care workers and nursing home residents among the first to get shots.