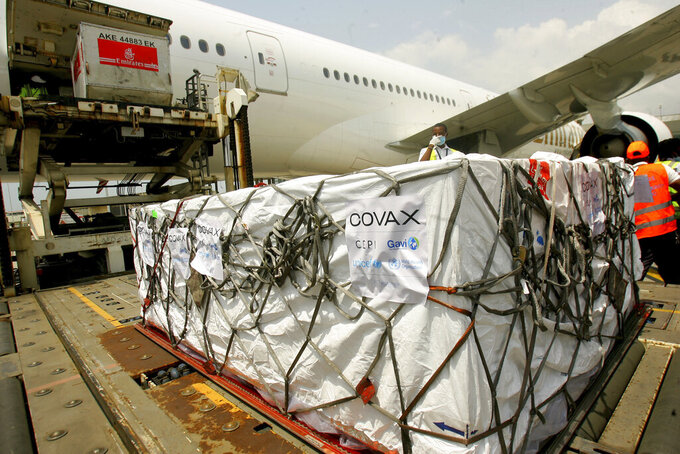 A shipment of COVID-19 vaccines distributed by the COVAX Facility arrives in Abidjan, Ivory Coast, Friday Feb. 25, 2021. Ivory Coast is the second country in the world after Ghana to receive vaccines acquired through the United Nations-backed COVAX initiative with a delivery of 504,000 doses of the AstraZeneca vaccine made by the Serum Institute of India. (AP Photo/ Diomande Ble Blonde)

ABIDJAN, Ivory Coast (AP) — Ivory Coast on Friday became the second country in the world to receive a shipment of COVID-19 vaccines from the global COVAX initiative, with 504,000 doses of the AstraZeneca vaccine made by the Serum Institute of India.

The vaccines arrived in the commercial capital, Abidjan, as part of the first wave of COVID-19 vaccines sent by COVAX, which was created to ensure that low- and middle-income countries have fair access to doses.

The first COVAX shipment was sent to Ghana on Wednesday, marking the beginning of the largest vaccine procurement and supply operation in history, according to the World Health Organization and UNICEF.

The COVAX initiative has been hampered by the severely limited global supply of doses as well as logistical problems that set vaccinations behind globally.

Some 24 other countries are expected to start receiving vaccines via COVAX next week, according to WHO Africa.

Ivory Coast will begin its vaccination campaign Monday, the government said. Health Minister Eugène Aka Aouélé said the West African nation’s first phase will target health personnel, defense and security forces and teaching staff in Abidjan, where 95% of the country's cases have been recorded.

The minister said this first batch will target more than 250,000 people. Ivory Coast has a population of more than 25 million.

Ivory Coast “is pleased and proud to be the second African country after Ghana to receive vaccines provided through the COVAX facility. This is an important step in our shared fight against the common enemy that is COVID-19,” the minister said. “The pandemic has taken a heavy toll around the world and our country is no exception.”

Like many African countries, Ivory Coast faces a resurgence of the pandemic that has increased cases and hospitalizations. It has recorded 32,295 cases and 188 deaths since its first case was recorded on March 11, 2020, according to Africa Centers for Disease Control and Prevention figures.

Ivory Coast is among 92 countries that will receive vaccines for free through the COVAX initiative, which is led by the WHO; Gavi, a vaccine group; and the Coalition for Epidemic Preparedness Innovations. Another 90 countries and eight territories have agreed to pay for doses.

“Today is an important first step towards achieving our shared vision of vaccine equity, but it is only the beginning," said the WHO representative in Ivory Coast, Dr. Jean-Marie Vianney Yameogo. “The global pandemic has already caused hundreds of thousands of deaths and disrupted the lives of billions of people ... Global and equitable access to a vaccine, which will protect health workers and those at greatest risk of contracting the disease in particular, is the only way to mitigate the impact of the pandemic on public health and the economy."