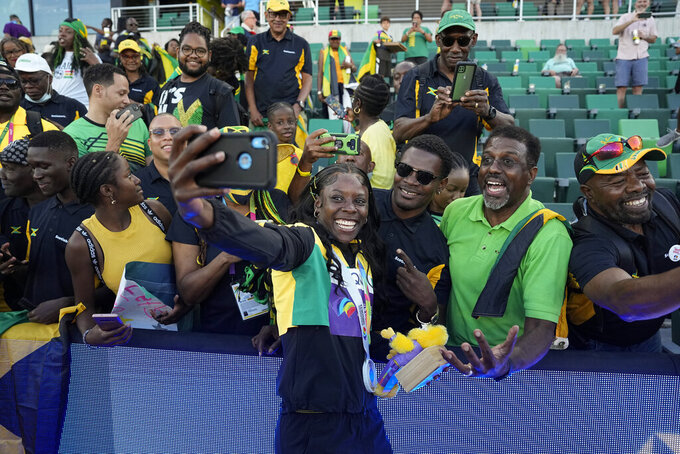 Shericka Jackson, of Jamaica, celebrates with fans after winning the final of the women's 200-meter run at the World Athletics Championships on Thursday, July 21, 2022, in Eugene, Ore. (AP Photo/David J. Phillip)

EUGENE, Ore. (AP) — Jamaica's Shericka Jackson can finally go watch the replay. The one of the race where she gave away her chance to be an Olympic champion.

She's now a world champion, a more-than-satisfying reward after a year in which she trained with the goal of never making the same mistake again.

The 28-year-old executed the curve perfectly and ran the 200 meters in the second-fastest time ever, 21.45 seconds, to lead a Jamaican 1-2 finish on Thursday night at the world championships. She beat 100-meter champion Shelly-Ann Fraser-Pryce to the finish line by 0.36.

Jackson was among the medal favorites last year in Tokyo, but a miscalculation midway through her preliminary heat caused her to slow down. By the time she'd realized what happened, she couldn't catch up. She finished fourth and didn't get to run in the final.

It ate at her so much that she refused to watch a replay of the race. Only learn from it.

“Sometimes, disappointment is hard to come back from,” Jackson said. “I don’t want to have that. I want to win whenever I'm competing.”

“It’s something you can take for your own self when you see others bounce back from disappointment,” Fraser-Pryce said. “It’s really wonderful to see her have that run.”

Defending champion Dina Asher-Smith of Britain took bronze and prevented this from being a back-to-back sprint sweep for the Jamaicans, a la what the Americans did in the men's 100 and 200. Elaine Thompson-Herah, who won the 200 in the Olympics and finished third here at worlds in the 100, finished seventh in this race.

“We were hoping for 1-2-3. We’ll celebrate 1-2,” Jackson said. “We came out here to do our best and our best was good enough. We delivered big two medals for the country. We are so grateful.”

Seconds after the win, sprint icon Usain Bolt tweeted “Brilliant” and punctuated it with two Jamaican flags — one each for Jackson and Fraser-Pryce.

This is how fast Jackson was: Her time was second only to one of the most hallowed marks on the books — the 21.34 by Florence Griffith-Joyner at the 1988 Olympics in Seoul. Jackson blew away the old world-championship record of 21.63 set by Dafne Schippers of the Netherlands in 2015.

Records, though, aren't on the mind of Jackson.

“Great execution will bring fast times,” Jackson explained. “You don’t think about breaking a world record because when you go into a race with time in your head, and don’t meet those expectations, you end up disappointing yourself.”

Not this time. Not at Hayward Field.

Jackson not only adds this to her silver medal from Sunday night in the 100, but eases a painful memory from the Tokyo Games that's long fueled her. She said she plans to finally watch that race and then another.