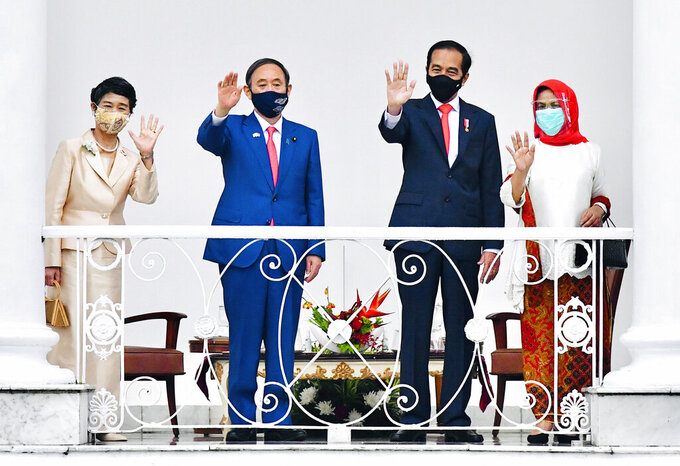 Suga, on a four-day visit to Vietnam and Indonesia, arrived Tuesday from the Vietnamese capital of Hanoi. Southeast Asia was chosen for his first trip since succeeding Shinzo Abe as prime minister last month in order to demonstrate the region’s importance to Japan.

After holding talks with Indonesian President Joko Widodo, Suga said Southeast Asian countries are key to pursuing Japan's “free and open Indo-Pacific,” or FOIP, and that he told Widodo that “Japan is committed to contributing to the peace and prosperity in the region.”

“I fully support the ASEAN Outlook on the Indo-Pacific, which Indonesia initiated, as it has a lot of fundamental commonalities with Japan's free and open Indo-Pacific," he said.

Widodo welcomed Japan’s support for Southeast Asian nations and said that “the spirit of inclusive cooperation also needs to be promoted in the context of Indo-Pacific cooperation as reflected in the ASEAN Outlook on the Indo-Pacific."

"I also underlined my hope that the South China Sea can continue to be a sea of peace and stability,” he said.

Suga said the two leaders also agreed to deepen and strengthen bilateral defense ties and will work toward holding a second “two-plus-two” foreign and defense ministerial talks. Japan has similar ministerial talks with the U.S., Australia and some other countries, while Indonesia is the only member of the Association of Southeast Asian Nations with that channel. The two sides also agreed to work toward achieving a defense equipment and technology transfer agreement.

Japan eased its arms exports ban in 2014 and has since been promoting exports of defense equipment under efforts by Abe, who resigned last month due to health issues, to step up the country’s military capability and help develop its defense industry.

Suga signed such a deal with Vietnam on Monday. Japan has defense equipment transfer deals with 11 other countries, including the U.S., Britain, the Philippines and Malaysia, and is negotiating with Thailand.

Japan on Tuesday agreed to extend a 50 billion yen ($470 million) loan to support Indonesia’s pandemic-hit economy, in areas such as medical supplies and equipment for medical institutions, Suga said. Japan will provide support to reinforce Indonesia's economy through infrastructure projects such as high-speed rail systems and the development of remote islands, he said.

“Indonesia is a maritime nation in the Indo-Pacific and a Japanese strategic partner, and Japan further promotes our cooperation in a range of areas, including efforts to overcome the coronavirus pandemic,” Suga said.

As it promotes the FOIP vision with the U.S., Australia and India, Tokyo wants to convey that its respect for a rules-based international system makes it a better partner for ASEAN nations than China, whose escalating unilateral and military activity in the region have triggered regional frictions.

Earlier Tuesday, Suga attended a welcoming ceremony at the presidential palace in Bogor, just outside Jakarta, Indonesia's capital, after arriving from Vietnam. On Wednesday, he is scheduled to meet people related to Japanese companies and lay a wreath at the Kalibata Heroes Cemetery before returning to Tokyo.